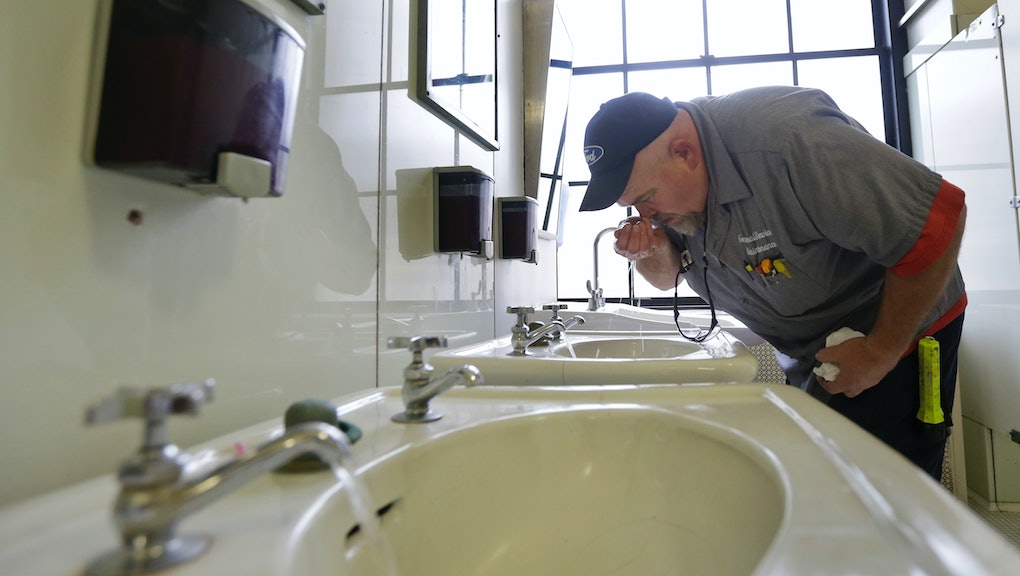 The U.S. Is Holding a Company Accountable for One of the Country's Worst Chemical Spills

A grand jury has indicted four former executives of a chemical company on pollution charges in a massive spill that prompted a drinking water ban for more than 300,000 West Virginia residents.

The Associated Press reports that an indictment unsealed Wednesday charges ex-Freedom Industries presidents Gary Southern and Dennis P. Farrell and two others with "failing to ensure that Freedom operated the steel storage tank that leaked in a reasonable and environmentally sound manner." Southern also faces fraud charges related to the company's bankruptcy case, which was filed eight days after the spill poured thousands of gallons of chemicals into West Virginia's Elk River.

The background: On Jan. 9,  the Freedom Industries facility leaked 10,000 gallons of crude chemical 4-methylcyclohexanemethanol (MCHM) into a tributary of the Kanawha River in Charleston, West Virginia.

Governor Earl Ray Tomblin declared a state of emergency in nine counties after authorities determined that the leak had contaminated water supplies. More than 300,000 residents in the Charleston metropolitan area were without access to potable water and instructed not to cook, bathe or wash with the contaminated water from West Virginia American Water (which uses the river for its supply).

Though state officials lifted drinking-water restrictions on Jan. 19, and the national Centers for Disease Control and Prevention said on Feb. 5 that the water was "appropriate for use," West Virginians remained skittish about problems with their drinking water.

According to a study released in May, which surveyed 500 people in the area, about one-third said that someone in their household became sick after their water was contaminated, renewing calls for research on the long-term health effects of the MCHM that leaked out of Freedom Industries facility. The CDC has been harshly criticized for deeming Elk River water drinkable without citing comprehensive studies on MCHM.

It's not just the leak. While Freedom Industries pledge to work with state regulators to address the spill, the company almost immediately came under scrutiny after the company filed for bankruptcy mere days after it. The Charleston Gazette reported that the company paid out millions of dollars to "insiders" — as they're referred to in bankruptcy law — in the months before its Chapter 11 filing. The company had sent $1.1 million of that pot to three former company owners, and the last payment was made on Jan. 8, the day before the leak was discovered.

"It's a red flag," Bob Simons, a bankruptcy lawyer in Pittsburgh, told the Charleston Gazette. "Any transfer within a year, to even as much as four years before bankruptcy, can be scrutinized to see if those transfers should be returned to the bankruptcy estate."

With the risk and proximity of a chemical disaster high, the indictment is an affirmation that, in the event of a horrific industrial disaster, those responsible will actually be held accountable by the justice system.