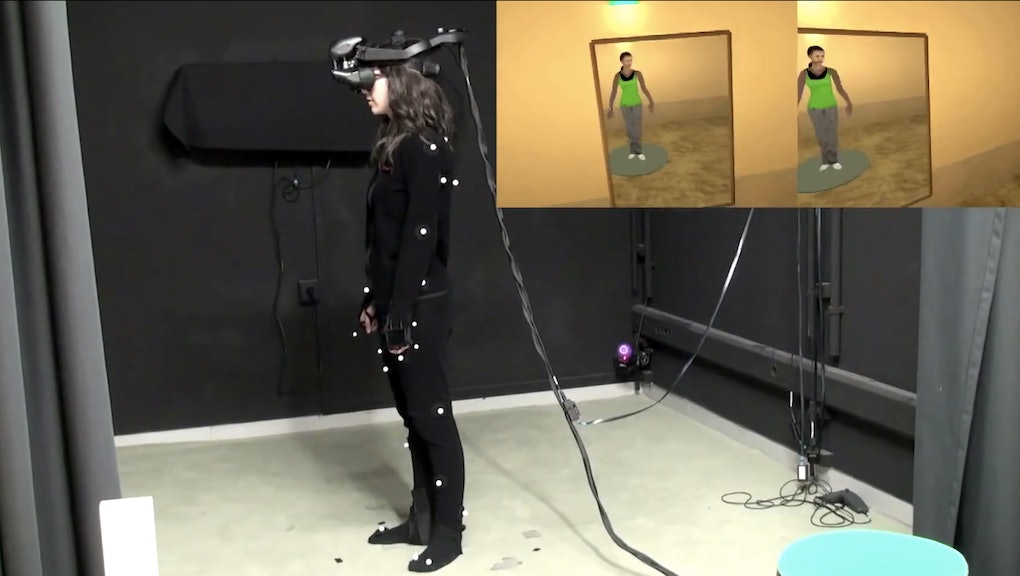 Empathy is a powerful thing.

A new scientific study confirms what many children are taught from an early age, that "stepping into someone else's shoes" will make you more sympathetic. The findings say a lot about how people's racial biases can be ameliorated by imagining themselves in a different skin color.

The study, "Changing bodies changes minds: owning another body affects social cognition," was written by a group of researchers from London and Barcelona and published this week at Trends in Cognitive Sciences. The researchers contend that white people become less racist when they "live" in a person of color's skin, even for a short period of time. "[Using] the brain's ability to bring together information from different senses," researchers say they were able "to make white people feel that they were inhabiting black bodies and adults feel like they had children's bodies," according to a press release. The results of such virtual body-swapping experiments are remarkable and have important implications for approaching phenomena such as race and gender discrimination.

How is this body-swap possible? The researchers conducted a series of three experiments — "Rubber Hand Illusion," "Enfacement Illusion" and "Full Body Illusions" — that created a virtual reality in which the participants' bodies were hooked up to sensory indicators that registered their feelings as they lived in dark-skinned bodies.

The scientific method and conclusion: "Light-skinned Caucasian participants" occupied both white and black bodies in a virtual environment, which they could also witness through a virtual mirror. The "participants' implicit racial biases were measured before and after embodiment," according to researchers, who found that "participants who embodied a black avatar showed a decrease in their implicit biases against black individuals, which was significantly greater than for those who embodied a white avatar."

Racism is learned behavior: Most people have the capacity to sympathize, but, the researches explain, human sympathy diminishes when there is a noticeable physical difference present, whether that be gender, race or ethnicity. What is extraordinary about the findings is that "self-association" with a person of a different race does not have to be reality — it can be an association and empathy stemming from the mind. "These changes occur via a process of self-association that first takes place in the physical, bodily domain as an increase in perceived physical similarity between self and out group member," the researchers note. "This self-association then extends to the conceptual domain, leading to a generalization of positive self-like associations to the outgroup."

This means that instead of being "blind" or insensitive to racial differences, the mind's ability to empathize with someone of a different skin color can result in racial awareness — which, on a broader scale, can lead to greater understanding and social change.

The study has its limitations, of course: For example, there's the fact that white people experiencing blackness in a virtual domain is a far cry from experiencing it in the context of the real world, with real social cues and outside prejudices. The decontextualized nature of the study, therefore, raises uncertainties regarding how these results would actually translate outside of the lab.

Still, the research is encouraging and offers parallels to what W.E.B. Du Bois calls a "second sight" or "double consciousness" that can induce racial sensitivity and kindness. And in a world where we're still fighting just to prove that #BlackLivesMatter, it is promising to know that certain small changes or experiences may be able to influence the way we view those who look different from us.