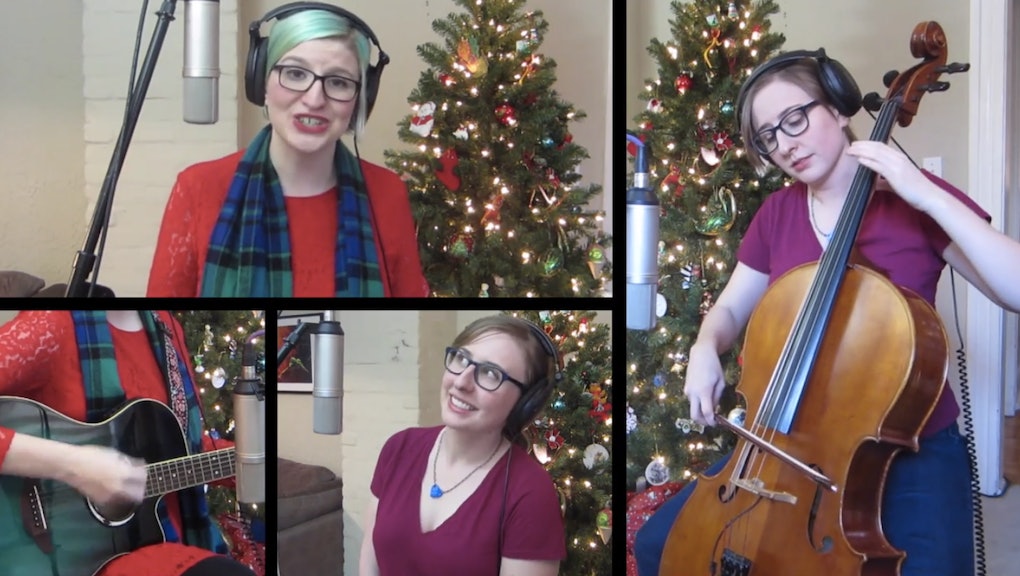 There is a time and a place for well-reasoned, nuanced debates about feminism. Sometimes, however, all you really want is a pair of hilarious women singing about bashing the patriarchy and pulverizing sexists while playing stringed instruments.

That time is now, thanks to the Doubleclicks, a musical duo made up of sisters Angela and Aubrey Webber. Hailing from Portland, Oregon, the sisters write songs "that are all at once snarky, geeky and sweet." This holiday season, they've gifted all of us with their version of a Christmas carol, only instead of sleigh bells and Santa coming down the chimney, they sing about a magic weapon for ridding the world of sexists and a fervent hope that slut-shaming dudes will be long gone this holiday season.

"The ability to make sexist assholes disappear / Is all I want for Christmas, it's all I want this year / I'm done with catcalls and with shaming / They've had their chance to learn, but the patriarchy's bullshit / And I want to watch it burn," the sisters sing. "Oh, do I seem too mad to you? God, I wonder why."

According to the Doubleclicks' YouTube page, they wrote the song for holidaybullshit.com, the aptly-titled website for the dark humorist's favorite game, Cards Against Humanity. Coming in at a neat two minutes and 45 seconds, the tongue-in-cheek ditty is the perfect song to passive aggressively play when your sexist family member or friend comes to visit this holiday season.

But it's not just the Doubleclicks. In fact, 2014 has been a very good year for funny feminist creations. In October, Elizabeth Simins started a "Womansplainer" website, which is the perfect service for any man who needs feminism explained to him. For $20, $50 or $100, Simins will answer any questions ("Are all feminists lesbians?") one might have about feminist theory.

Then there was the bell hooks hotline, a fake phone number that responds with an "automatically generated quotation from feminist writer bell hooks" when given to an unwanted suitor.

Other notable entries included #FeministHackerBarbie, a campaign that turned Mattel's utterly sexist attempt at making Barbie into a computer programmer on its head, as well as the Twitter account @LegoAcademics, which takes female scientist Legos and puts them in situations familiar to academics.

This holiday season, however, we'll continue hold on to our feminist phone lines and whistle The Doubleclicks' tune until the patriarchy is finally blown to smithereens.