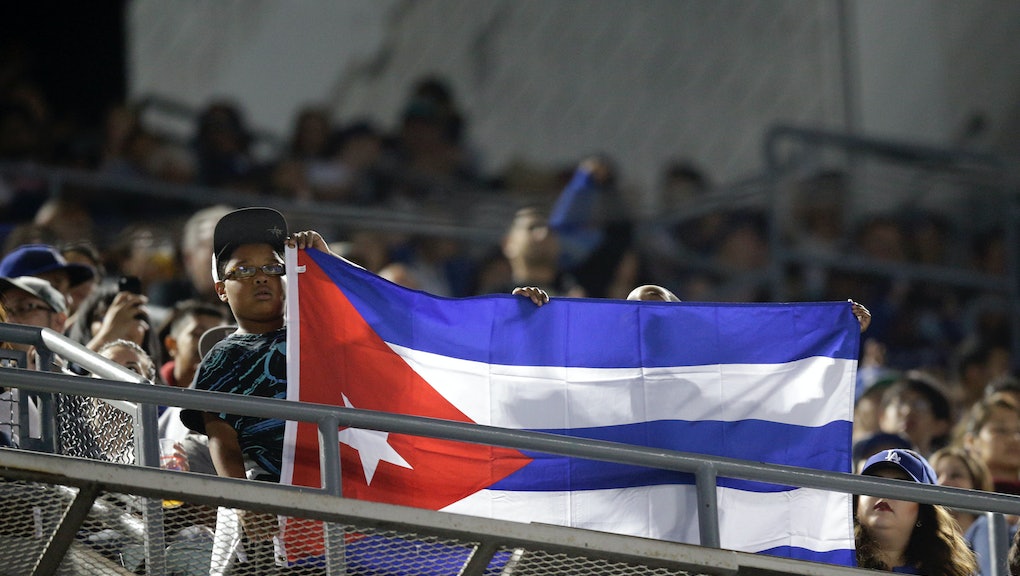 In response to President Barack Obama's announcement Wednesday that the United States is taking steps to mend its tattered relationship with Cuba, Republican senator and potential presidential hopeful Marco Rubio from Florida issued a statement to alert the world to Obama's folly. He promised to do everything in his power to combat the White House's unprecedented gestures toward easing restrictions on trade and travel to the country.

"Today's announcement, initiating a dramatic change in U.S. policy toward Cuba, is just the latest in a long line of failed attempts by President Obama to appease rogue regimes at all costs," said Rubio, who is the son of Cuban immigrants.

"I intend to ... make every effort to block this dangerous and desperate attempt by the president to burnish his legacy at the Cuban people's expense."

But as polarizing as Obama's actions appear when depicted by hardline Republicans, there's substantial polling evidence that he's not being particularly audacious with this move.

Rubio's politics should not be read as representative of the Cuban-American or Latino community. Historically, Cuban-Americans, many of whom fled Castro's regime, have constituted an influential conservative voting bloc that pushes for hardline policies isolating Cuba. But in recent years, the community has been developing a bluer hue. A Pew Research Center report from June found that over the past decade or so, the percentage of Cuban-Americans that lean toward or affiliate with the Democratic Party has doubled:

A recent survey by the Cuban Research Institute at Florida International University in Miami found that a majority of Cuban-Americans now oppose continuing the U.S. embargo of Cuba and support diplomatic relations with the country.

A great deal of this shift can be explained by way of demographics. Much like the generational rift on Israel within the Jewish community, younger Cubans are less animated by the memory of 20th century suffering and tend to be more liberal than their parents. In the FIU study, 90% of Cuban-American Millennials in Miami-Dade County supported diplomatic relations with Cuba.

According to an Atlantic Council poll earlier this year, Latinos and Americans overall are also generally supportive of thawing the Cold War freeze on Cuban-U.S. relations. The poll found that 62% of Latinos and 56% of people nationwide generally support normalizing relations or engaging more directly with Cuba:

This finding shouldn't be all that surprising. As the Atlantic's David Graham points out, while Cuba retains a stigma in the popular imagination and isn't generally viewed favorably, "in every Gallup poll since 1999, a majority of Americans have wanted to normalize relations with Cuba, with the number varying between 55 and 71 percent in favor. And bare majorities — or in one 2000 poll, a plurality — have also supported ending the U.S. embargo against the country."

So while Obama should certainly be lauded for putting an end to an utterly disastrous embargo on Cuba, it's not exceptionally politically ambitious. The public was ahead of the curve on this issue.