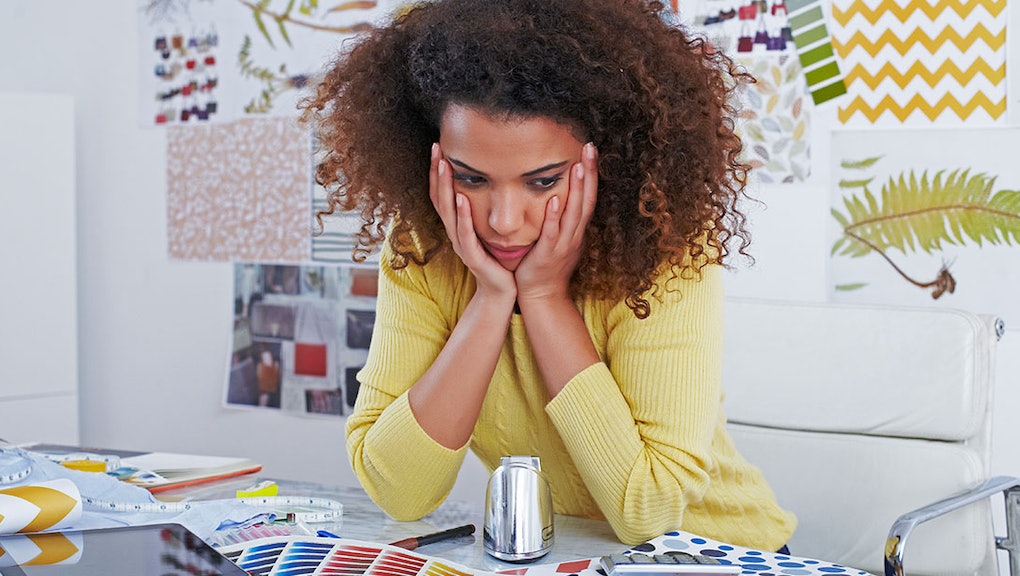 Fret away, worrywarts. Recent research from researchers at the Netherlands' Tillburg University suggests that worrying behavior is correlated with higher verbal intelligence.

In other words, people who worry more are also smarter. The team's working theory is that more verbally intelligent people focus on past and future events in greater detail, allowing them more room to fret about things.

Research Digest reports that the study, to be published in Personality and Individual Differences, asked a relatively small sample of 126 undergrads to "complete measures of worry, anxiety, depression, rumination, social phobia, dwelling on past social events, mood, verbal intelligence, non-verbal intelligence, and test anxiety." According to Research Digest, the last measure — how nervous the respondents were for an upcoming exam — was intended to separate the participants' generalized and "in-the-moment" anxiety levels.

After controlling for various situational influences such as anxiety over the upcoming test and their current mood, the team discovered that the students who were quicker to agree to statements like "I am always worrying about something" scored higher on the Wechler Adult Intelligence Scale. A similar effect was found among those prone to focusing on their own worries ("what am I doing to deserve this?").

Backed up by other research: With a relatively modest sample size and the somewhat hazy state of evolutionary psychology, this study is small but interesting. However it does line up with what other scientists have been saying. In 2012, another study published in Frontiers in Evolutionary Neuroscience found that both high intelligence and worrying behavior were linked to depletion of the nutrient choline in certain parts of the brain, indicating they may be evolutionarily linked.

"While excessive worry is generally seen as a negative trait and high intelligence as a positive one, worry may cause our species to avoid dangerous situations, regardless of how remote a possibility they may be," lead author Jeremy Coplan told ScienceDaily. "In essence, worry may make people 'take no chances,' and such people may have higher survival rates. Thus, like intelligence, worry may confer a benefit upon the species."

Congratulations, pessimists! Worrying might be a sign of brisk business in the grey matter department, and could have kept your ancestors from getting lost in the woods or walking into obvious traps. Unfortunately, that same never-ending anxiety would mean your intelligence is also a curse. But at least you're alive.

But before you get too excited: What exactly do you worry about, precisely? If you constantly re-live old social interactions in your head, beating yourself up for awkward faux pas and ruined jokes, there's also some bad news. The researchers correlated that behavior with lower Wechler scores, theorizing that more verbally intelligent people are better "at processing the non-verbal signals from individuals they interact with in the moment, leading to a decreased need to re-process past social encounters."

Nevertheless, the main takeaway is clear: worrying about past mistakes isn't going to help anyone, but if you find yourself constantly checking and re-checking your ideas and trying to keep 10 plates spinning at once, chances are you're also a smart person.