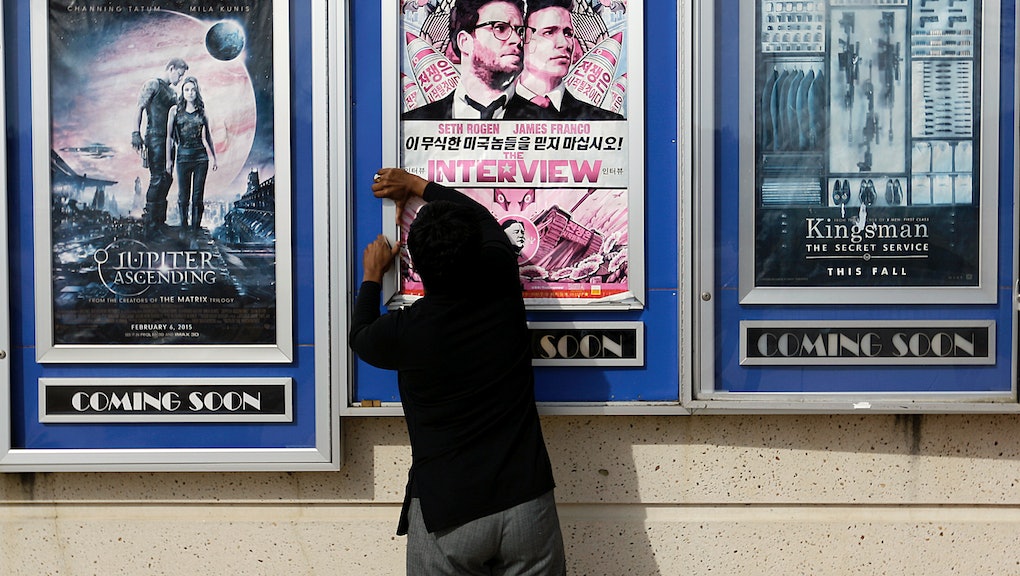 Sony Hackers Killed 'The Interview' — And More Movies Might Be Next

On Wednesday, Sony announced it will pull the plug on its North Korea-mocking Seth Rogen and James Franco flick The Interview after pressure from hackers caused five major movie theater chains to refuse to show the film. The studio decided to cancel the planned Dec. 25 theatrical release.

The company has had to deal with embarrassing revelation after revelation thanks to a group called the Guardians of Peace, which leaked personal information and emails from Sony employees. It's a decision that sets a worrisome precedent: Hack our company and we'll give in to your demands.

Or, as one comedian put it:

The background: The Interview made waves thanks to its premise, in which a famous television host, played by Franco, and his producer, played by Rogen, land a one-on-one with North Korean dictator Kim Jong-un. The U.S. government tasks the pair with covertly assassinating him.

The Guardians of Peace explicitly referenced the movie in a threat that included, "The world will be full of fear. Remember the 11th of September 2001."

The Department of Homeland Security said earlier this week that there's no credible threat to any theaters showing The Interview, but that didn't stop skittish theaters from canceling their showings and Sony from following suit.

This would seem to point to the idea that the North Koreans are not behind the attack. However, reports have begun to surface that they might actually be behind the cyber-infiltrations.

Either way, most of us are left wondering: Who are these people and what do they want?

What it means: Of course, these days a movie doesn't have to be released in theaters for people to actually watch it. The Verge and others have made the case that Sony would be better off distributing the movie online.

As these hacks have shown, even the most private data on the Internet can be leaked. Anyone who thinks that refusing to release The Interview is going to prevent people from seeing it eventually isn't thinking straight. Why not let it out officially, potentially charging viewers and actually making some money back?

But what's also worrying is that by giving in to the threat, a message is sent to groups like the Guardians of Peace. It worked once, why wouldn't it work again?

By not releasing The Interview, Sony is operating on the terms of cyberterrorists. And it's wasting some really unprecedented publicity.