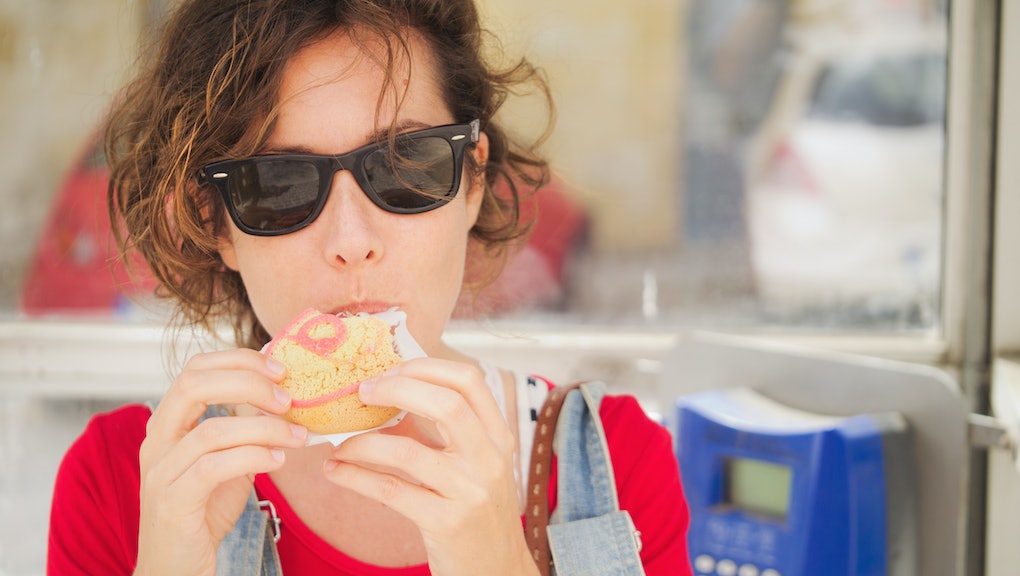 2014 was the year of the Cool Girl — and her massive appetite.

The Cool Girl "jams hot dogs and hamburgers into her mouth like she's hosting the world's biggest culinary gang bang while somehow maintaining a size 2, because Cool Girls are, above all, hot." The passage is from the famous "Cool Girl" speech in Gillian Flynn's much-praised book-turned-movie Gone Girl, but it might as well be the manifesto for one of this year's biggest food trends:

2014 was the year we wholeheartedly embraced obsessive snacking, from ever-zanier combos like Taco Bell's Waffle Taco and Lays' Wasabi Ginger chips to clothing covered in bacon and burritos. Our craving for sugary, salt-laced and carb-rich foods drove sales of snack foods way up. But it's not simply that we're eating more; we're also celebrating it more publicly than ever. And that celebration, whether we realize it or not, is the privilege of Cool Girls.

The Hairpin helpfully gave the trend a name: #Snackwave. "Snackwave is defined by exaggeration and extremism," Hazel Cills and Gabrielle Noone wrote in September. "You don't just eat cheeseburgers. You wear a shirt covered in them. You don't just eat pizza. You run a blog devoted to collecting pictures of celebrities eating pizza."

One look at pop culture reveals the extremism. Fast food-inspired high fashion collections like Moschino's and Jeremy Scott's served inspiration for svelte superstars like Beyoncé and Katy Perry to dress as pizzas come to life. In interviews, Jennifer Lawrence pledged her allegiance to Doritos and model Chrissy Teigen literally bathed in Skittles, a moment likely captured in between takes of her MTV show Snack-Off. These women are living embodiments of the Liz Lemons, Rory Gilmores and Grace Adlers before them: conventionally attractive heroines with appetites that would make a marathon runner sick.

But it's the current embrace of snacking by real women on social media that's turned the character trait into a trend. Trickling down to the Seamless-eating masses surfing the Web at home in their fashion sweatpants, young women are enthusiastically posting high-calorie #foodporn and tweeting their shameless binges, all while hitting "like" on the common Instagram meme:

On one hand, celebrating snacking is a stark contrast to the growing diet industry, which will surpass $586 billion in revenue by the end of 2014. And the women flooding Instagram with body-positive declarations are proudly celebrating their healthy relationship with calories and their bodies. Popular social media accounts like Hot Girls Eating Pizza aim to prove that we can have our pizza and eat it, too.

Well, at least hot girls can. If we tear away from our burgers for one moment and take a closer look, #Snackwave's positive message starts to crack like a taco shell.

More than a third of Americans are obese, and over 60% of women are considered overweight, many of whom simply can't afford to take such a cavalier approach to snacking. Wondering how Liz Lemon pulled it off? Recall that Tina Fey, patron saint of smart girls with a sweet tooth, famously languished behind the camera until she lost 40 pounds.

Not all women are granted the same snacking privilege. In fact, many have experienced public food-shaming by strangers, verbally harassed for daring to eat while possessing a body that doesn't resemble a swimsuit model's. There's a reason, after all, the Instagram account highlights "hot girls" eating pizza, not just any girls.

Of course, some women can eat pizza with minimal effects on their figures; everyone's bodies and metabolisms are different. But many cannot, and the boastful nature of #Snackwave, however positive in intent, has prompted equally damaging criticism over "large appetite plus small waistline" math that some say doesn't add up. The backlash is embodied by the viral Instagram account You Did Not Eat That, which calls bullshit on thin women broadcasting their candy-coated, oil-slicked eating habits on social media.

Women should be empowered to eat whatever they want, whenever they want. But a food fad championing foods for their toxicity has an unmistakable undercurrent of Cool Girl worship. It fetishizes the habit, creating as much pressure for women as the virtuous photos of kale juice and teeny salads do.

Snacking is fantastic, if you want to snack. If you want to eat those celery sticks, you shouldn't feel bad. If we're going to really dismantle society's unrealistic body standards for women, every woman's eating habits must be her own — free of judgment, shame or even praise from strangers and, especially, Instagram followers.

Down with #Snackwave. Long live snacking.