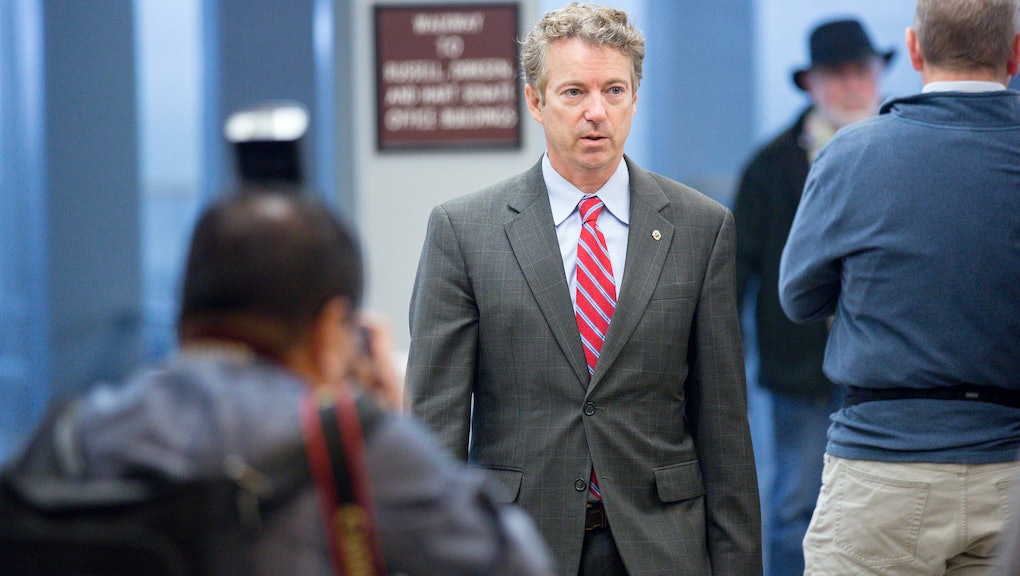 Republican Sen. Rand Paul seems as eager as anyone to get the 2016 presidential primary race underway. But if it's up to Kentucky's secretary of state, his potential bid might be in trouble before it even gets out of the gate.

In the past 48 hours, former Democratic Senate candidate and Kentucky elections boss Alison Lundergan Grimes has threatened to challenge Paul over the possibility that his name would appear on the same ballot twice: once for the Senate — he is up for re-election in 2016 — and again for the state's presidential primary.

If Grimes is successful, Paul could be made to choose between a surefire return to the Senate and beginning a long-shot campaign for the White House.

The legal basis: "The law is clear. You can't be on the ballot twice for two offices," Grimes told Lexington's WHAS-TV on Wednesday. "We'll look to the court for any guidance that is needed. And at the end of the day, we're not going to be bullied."

The text of the law supports her point unambiguously. Enacted in 1990, subsection 118.405 of the Kentucky election code prohibits statewide candidates from having their names appear on the ballot for two separate offices:

Kentucky Republicans have known about the potential problem for some time. WHAS reports that "House Speaker Greg Stumbo (D-Prestonsburg) declined to consider a [Republican-sponsored] Senate bill to [change the law] earlier this year."

Paul's lawyers are currently considering a court challenge, and some Republican operatives are discussing changing the state's primary apparatus from a vote to a caucus system. In the latter case, there would be no balloting, just a party-managed process of assessing support and doling out delegates.

Alternatively, there is no law prohibiting a candidate from standing in Paul's place and pledging to release his delegates to Paul's camp at the Republican National Convention in Cleveland that summer.

"There are avenues available to him, should he decide to run for both offices at the same time. I don't think we have abandoned any option, nor have we settled on any option," said Doug Stafford, one of Paul's top aides, when reporters asked about the issue earlier this month.

Revenge of Alison Lundergan Grimes? Adding some narrative spice to the stew here is the fact that Grimes recently lost a high-profile Senate race against incumbent Sen. Mitch McConnell, who will become majority leader when Republicans take over the chamber in January.

Naturally, Paul's supporters are already accusing Grimes of political chicanery. A number of Paul's most trusted staff helped run McConnell's campaign, which faced threats from both the tea party in the primary and Grimes' well-funded campaign this fall.

It's also worth noting that Grimes, despite her disappointing showing on Election Day, would be right at the head of the pack of potential replacements if Paul chooses to run for the White House over seeking reelection to the Senate. (Paul has formally announced his plans to run for a second term.)

The only possible hiccup in Grimes' gambit — and possible boon for Paul's cause — is Grimes' own 2015 re-election contest. Defeat in this heavily Republican state is always a possibility, despite Democratic Gov. Steve Beshear's popularity. If Grimes loses her race, then she won't have much of a chance to drag Paul down with her.