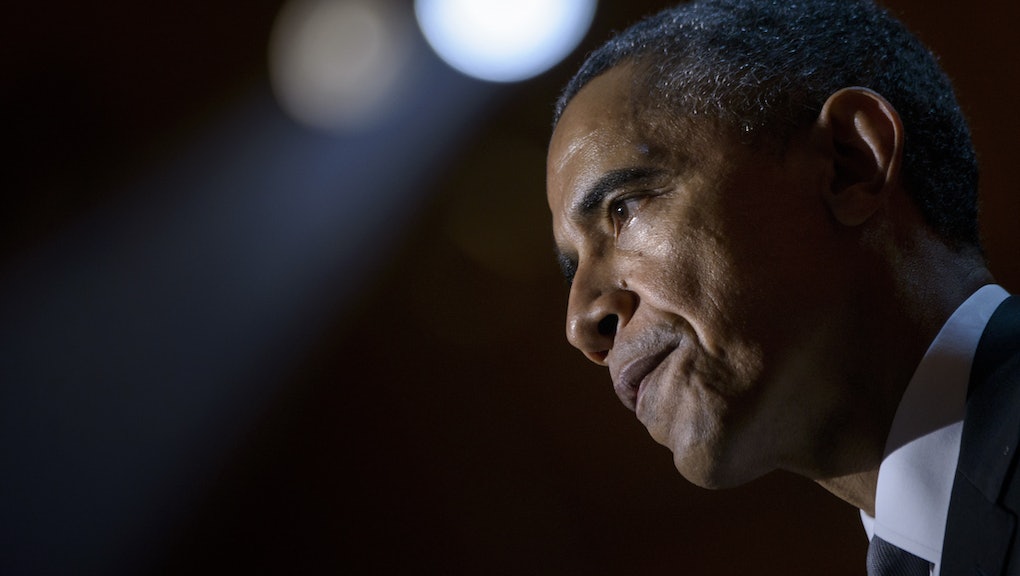 13 Startling Numbers Reveal the Reality of Black America Under Obama

When Barack Obama was elected president in 2008, the Los Angeles Times' Shelby Steele asked a question many Americans were grappling with at the time: "Does his victory mean that America is now officially beyond racism?"

It was a ridiculous suggestion in retrospect, more so given the past six years. If anything, Obama's presidency has shown how remarkably prevalent racism in America truly is. This isn't a problem anyone — even Obama — can magically solve.

It's not a phenomenon confined to bigoted sheriffs in New Hampshire, or racist fanatics coming "out of the woodwork" at tea party rallies. Nor is it something that "rears its ugly head" periodically, as when police officer Darren Wilson shot and killed unarmed 18-year-old Michael Brown in Ferguson, Missouri, in August, called Brown a "demon" and avoided charges.

Those are just the events that made news. In most cases, racism can be described as a matter of measurable, statistical inequalities present in our everyday lives, and arguably just as stark under our first black president as they've ever been.

Reading them only draws one logical conclusion: The implied promise of a "post-racial" society under President Obama is one of the great myths of the 21st century. Perhaps it's time to accept that the object of our collective hope is still a long way away.

Such inequalities take many forms, whether revealed by public opinion or disparate rates of imprisonment and employment. Yet somehow, there's still "debate" around their veracity. Conservative pundits and politicians tout the same tired lines day in and day out, insisting that if black people are falling behind, it's their own fault, not the result of entrenched or imposed inequality.

"There is a real culture problem here that has to be dealt with," Rep. Paul Ryan said earlier this year. Ryan was referring to the perceived failure of men in the "inner city" to "[learn] the value and the culture of work." Meanwhile, Fox News' Eric Bolling said on Jan. 22, "We have a black president, we have black senators. ... Is there racism? I don't think there's racism."

Thankfully racism's persistence doesn't depend on what Ryan, Bolling and company think. There are numbers, and plenty of them, that attest to the brutal extent of its systemic reach.

Here are 13 figures that illustrate problems that didn't magically go away for black Americans when Obama was elected:

The SPLC says Obama played a major role in inspiring this growth. The group quotes a Virginia KKK member as telling WTVR-TV in Richmond, "Since Obama's first term, our numbers have doubled and now we're headed to a second term, it's going to triple."

Nearly 100: The number of people murdered by registered members of online white supremacist network Stormfront in the past five years, as of April. The SPLC reports that the "bias-related" murder rate by users "[accelerated] rapidly" once Obama took office.

21: The number of times more likely a black male age 15-19 was to be killed by police than a white male the same age between 2010 and 2012, according to ProPublica.

4,347: The number of black men per 100,000 who were incarcerated in 2010. The number for white men that same year was 678, according to public affairs TV show Moyers & Company, citing the Pew Research Center.

39%: The percentage of black students enrolled in schools that were more than 90% minority in 2011 — a strong indicator of poverty, disadvantage and the various disparities that come with them, according to the Economic Policy Institute.

That's despite black students working three hours more at part-time or work-study jobs per week on average that their white peers, according Mic's Chris Walker.

The gap between the two has widened significantly since the Great Recession.

$98,305: The average wealth for black families in 2010. Investopedia defines wealth as "total market value of all [one's] physical and intangible assets," making it a strong indicator of whether a family gets richer or poorer as time passes.

The average wealth of white families in that same year was a staggering $631,530. The wealth gap between white and black Americans has widened steadily for at least the past decade.

$629: The median weekly earnings for a black full-time wage or salary worker in 2013, according to the Bureau of Labor Statistics. Compare that to $802 for a white worker. The New York Times reports both numbers have climbed since 1980, but the gap between the two has widened.

27%: The poverty rate for black Americans age 18-64 in 2012. The rate for white Americans that age was 9.7%, the Stanford Center on Poverty and Inequality reports. Both numbers have risen over the past decade.

33%: The poverty rate for black children — the highest rate of any group of children in the country, according to the National Center for Children in Poverty.