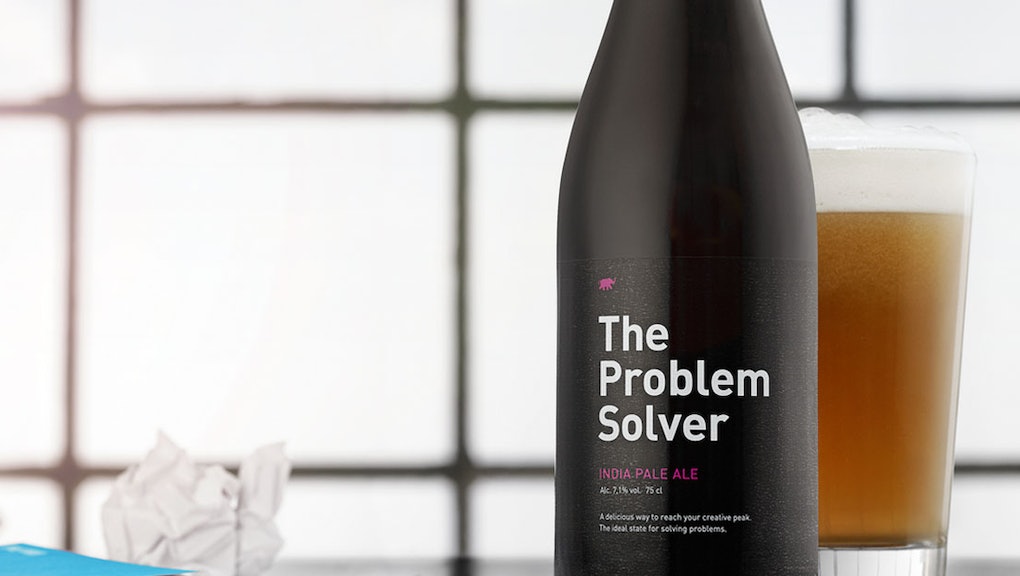 Throughout history, countless artists, writers and big thinkers from Bob Marley to Steve Jobs have credited various intoxicating substances for inspiring them to reach new intellectual heights. Now a new beer is claiming it can help drinkers reach a similarly perfect state of creative nirvana.

Working with Copenhagen-based Rocket Brewing, Danish agency CP+B has developed a beer that it says will enable drinkers to accurately reach a state of buzzed perfection while working on creative tasks. With labels that help the drinker accurately calculate their blood alcohol content (BAC) according to their weight, The Problem Solver IPA is marketed as a way to bolster creative thinking and help beer-drinkers moderate their alcohol consumption to the ideal level.

The theory goes that a BAC of about .075, just below the legal limit for driving, is the precise level at which relaxation and flexibility peak without seriously compromising focus or verbal ability.

Here's how they're marketing the tasty-looking brew:

The Problem Solver is a handcrafted Indian Pale Ale brewed to tickle taste buds and brain cells. It has a refined bitterness with a refreshing finish. The indicator on the bottle makes is easy to find your creative peak. Drink the amount that fits your weight to make sure you hit the magical 0.75%.

The scientific basis: The .075 BAC level comes from the University of Illinois at Chicago's Jennifer Wiley, who believes her research has identified the perfect level at which alcohol maximizes its contributions to the creative process. Men's Health reports that her 2013 study, published in Consciousness and Cognition, used a sample of 40 21- to 30-year-olds given either a vodka-cranberry drink or nothing and then asked them to solve verbal puzzles such as "Which word goes along with the previous three?" The group who was estimated to have a BAC of about .075 solved puzzles about 3.7 faster than their dead-sober comrades.

According to Wiley, alcohol "manipulates focus," producing feelings of relaxation and flexibility that increase creative problem-solving skills. Psychology Today's Sian Beilock adds that alcohol probably benefits out-of-the-box thinking by inhibiting working memory. She argues that "people's ability to think about information in new and unusual ways can actually be hampered when they wield too much brain power."

So basically, a BAC of .075 makes you a little dumber in a good way by allowing you to bypass your filters and inhibitions.

Harvard's Dr. Alice Flaherty concurs in an excerpt from her book The Midnight Disease highlighted by PRI:

When your alcohol level first starts to rise the first thing that it inhibits is some of the inhibitory systems ... There have been a bunch of studies showing that alcohol doesn't actually help creativity. What it does is it lowers your judgment — so that you think what your writing is more creative. It reminds me a little of William Stafford, who said that all you have to do to get rid of writer's block is just lower your standards.

Drink up? Unfortunately, there's a caveat: PRI's Adam Wernick cautions that alcohol might help in the short term but "pretty quickly your work is going to deteriorate." That probably applies double if you over-indulge, something The Problem Solver's brewers freely admit.

"Caution: Enjoying the right amount will enhance your creative thinking. Drinking more will probably do exactly the opposite," the site warns. So enjoy ...  just do it responsibly.

For now, Co.Design reports that the beer is only being served at CP+B, a Copenhagen craft beer store and some local creative meet-ups, meaning that for now you'll just have to rely on your own good judgment when imbibing and creating. But that doesn't mean some crafty home-brewers won't be close behind with their own "Creativity Cream Ale."