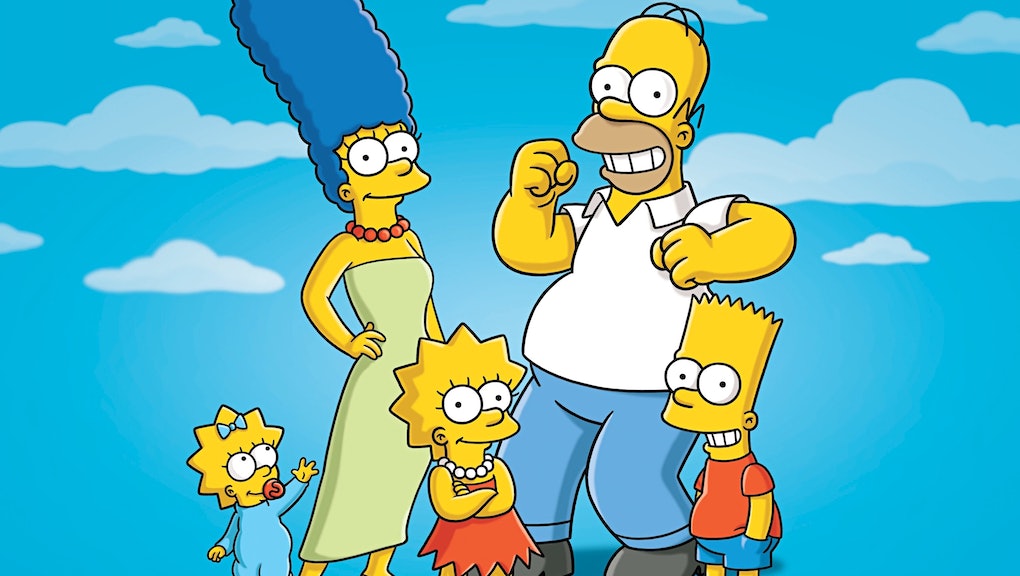 This week marks the 25th anniversary of American cultural landmark The Simpsons, the longest-running primetime animated series in the U.S. It's no exaggeration to say that an entire generation of Americans grew up with The Simpsons.

It would be almost impossible to put all of the show's funniest jokes in one list (there are hundreds), and every fan you'd ask would come back with different answers. Here are 15 classic gags that are among the most hilarious, some of which were written more than 20 years ago.

1. Homer gets his hand stuck in the toaster. ("Treehouse of Horror V")

Simpsons diehards will probably say "Treehouse of Horror" episodes don't count. But this gag has a great payoff that somehow manages to make Homer look even stupider:

In other episodes, Homer's had his hands trapped in different vending machines at the same time:

Sometimes, Homer's stupidity seems less amusing and more exasperating to everyone around him — like when he broke the will of two FBI agents simply trying to convey the concept of witness protection to him:

When Mr. Burns bets $1 million with a rival over the outcome of the annual Springfield/Shelbyville nuclear power plant baseball game, he tries to cheat by hiring an entire team of '90s-era MLB stars as ringers. His plan quickly falls apart when virtually every single one of them falls victim to horrible mishaps while training or on the way to the game, culminating in Ozzie Smith entering Springfield's famous Mystery Spot:

And fellow MLB player Steve Sax falls into a much more mundane but just as deadly dilemma when he's pulled over by the notoriously incompetent Springfield Police Department: "I heard some guy got killed in New York and they never solved the case. But you wouldn't know anything about that now, would you, Steve?"

Keep your fancy-schmancy terms to yourself, Frenchie. Moe doesn't park in some high-falutin' garage. He parks in a car hole and he's damn proud of it. But he could just be bluffing.

This clip is a great example of The Simpsons' uncanny ability to coin hilarious one-liners, as well as how it generated a seemingly unending series of made-up words that entered the popular lexicon. "D'oh!" is the most famous of these, alongside other winners like "meh," "cromulent" and "kwyjibo."

"Cape Feare" was nominated for an Emmy. It boasts one of the funniest segments in TV history: Villainous ex-Krusty sidekick Sideshow Bob humiliatingly steps on a rake that hits him in the face, then again... and again... and again.

The rake-stepping goes on for around half a minute, just long enough that it ceases to be funny, becomes annoying and then becomes funny again. Later in the episode, the viewer briefly sees a frustrated Sideshow Bob encounter another field of rakes with the same problem.

This one speaks for itself:

When Homer accidentally spills an ant colony into a zero-gravity spacecraft, one of the ants floats right onto a live video feed. Spineless news anchor Kent Brockman doesn't miss a step bending over backwards after seeing what he thinks was live video of gigantic insects assaulting the planet — a line that launched an Internet meme favorite:

"Ladies and gentlemen, er, we've just lost the picture, but, uh, what we've seen speaks for itself. The Corvair spacecraft has been taken over — 'conquered,' if you will — by a master race of giant space ants. It's difficult to tell from this vantage point whether they will consume the captive Earth men or merely enslave them. One thing is for certain, there is no stopping them; the ants will soon be here. And I, for one, welcome our new insect overlords. I'd like to remind them that as a trusted TV personality, I can be helpful in rounding up others to toil in their underground sugar caves."

You won't be able to get this out of your head either.

Krusty the Clown has endorsed a lot of dubious products over the years, but this SUV ruled unfit for "highway or city driving" is among the worst:

Top of the line in utility sports / Unexplained fires are a matter for the courts!

She blinds everybody with her super high-beams / She's a squirrel-crushing, deer-smacking, driving machine!

Famous actor Troy McClure — voiced by the late, great Phil Hartman — has really fallen on some tough times, between his rapid decline into B-list status and his disturbing sexual fetish involving fish. But his latest career move, starring in a Planet of the Apes parody featuring a techno "Dr. Zaius" song, is questionable even by his standards:

This pitch-perfect parody of The Music Man features the one-off character Lyle Lanley, a shady, town-hopping monorail salesman who promises to put Springfield on the same level as "Ogdenville, Brockway and North Haverbrook!"

It's hard to pick just one Ralphism, so here's a supercut featuring everything from "Hi, Super Nintendo Chalmers" to "I love you because you kill people":

Sometimes, The Simpsons drops all pretenses of logic:

At a chili cook-off, Homer is pretty sure he's outwitted Chief Wiggum by eating his "Guatemalan insanity pepper"-laden dish with a mouthful of wax, preventing him from actually tasting the eponymous chilies. But he soon learns that the real danger isn't the heat, it's the trip:

Ultimately, Homer goes on a spiritual journey/hallucination that sees him meet a talking shamanistic fox, destroy the sun and ultimately realize Marge is his soulmate. It's a touching ending to an episode that also contains one of the series' biggest "can't unsee" moments: