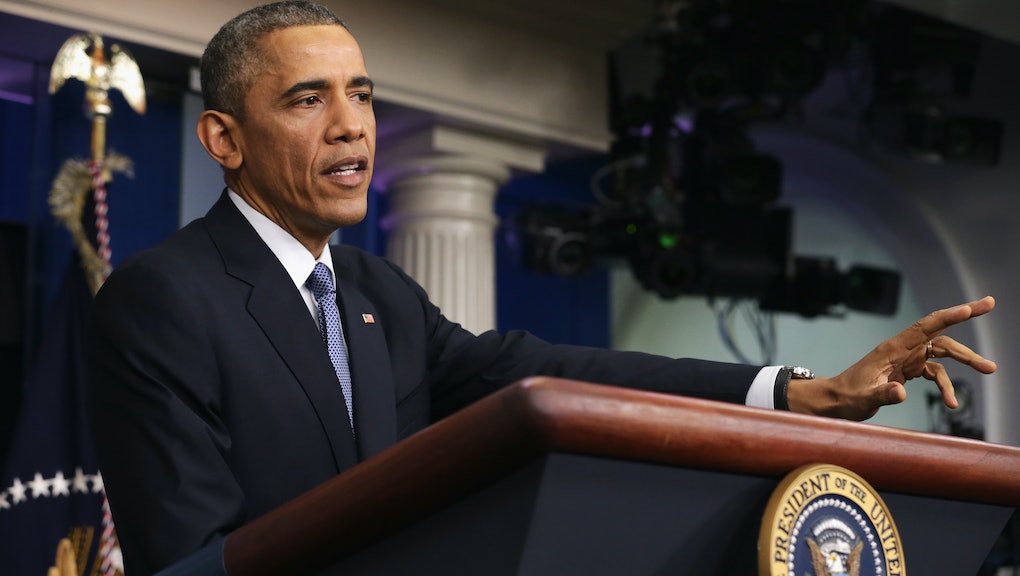 In One Video, Obama Sums Up Why You Should Care About Sony's 'The Interview' Hack

President Barack Obama said at a press conference Friday that Sony's decision to bow to the threats of alleged North Korean hackers and cancel the release of its satirical movie The Interview was "a mistake."

Taking questions from reporters before leaving for a holiday vacation in Hawaii, the president made a forceful argument against Sony's decision to scrap the movie, saying the decision set a troubling precedent that would encourage similar attacks in the future and encourage self-censorship among media and news companies concerned about being targeted by hackers.

"We cannot have a society in which some dictator someplace can start imposing censorship here in the United States," Obama said. "That's not who we are. That's not what America's about. ... I wish [Sony had] spoken to me first."

Watch the president's comments on Sony and North Korea here:

The hack: The first signs of the attack came on Nov. 24. The Verge reported: "Computers at the company have been completely unresponsive, showing a glowering CGI skeleton, a series of URL addresses and a threatening message from a hacker group that identifies itself as #GOP."

The entire Sony email database was shut down, and previously secure information ranging from the social security numbers and salaries of employees to a slew of deeply embarrassing and offensive email exchanges between top executives were stolen and subsequently leaked to the public.

Investigators quickly set their sites on North Korea, who in July had complained to the United Nations about a forthcoming Sony comedy, The Interview. The nation was offended by its depiction of a bumbling American TV team traveling to the country on CIA orders to assassinate Supreme Leader Kim Jong-un.

On Tuesday, the hackers delivered a more serious threat.

"The world will be full of fear," they said in an email. "Remember the 11th of September 2001. We recommend you to keep yourself distant from the places at that time. (If your house is nearby, you'd better leave.) Whatever comes in the coming days is called by the greed of Sony Pictures Entertainment."

Despite an assurance from the Department of Homeland Security that there was "no credible intelligence to indicate an active plot against movie theaters within the United States," the top 5 chains in North America quickly backed down. Regal Entertainment, AMC Entertainment, Carmike Cinemas, Cineplex Entertainment and Cinemark all said they would not screen the movie.

One day later, Sony announced that it would not release the movie on Christmas Day, nor would the studio make it available on disc or online.

The FBI's findings: Earlier Friday, the FBI revealed the results of an investigation into the hack that turned up evidence of the North Korean government's involvement. The report highlighted three pieces of information:

Technical analysis of the data deletion malware used in this attack revealed links to other malware that the FBI knows North Korean actors previously developed. For example, there were similarities in specific lines of code, encryption algorithms, data deletion methods and compromised networks.

The response: The FBI's investigation and findings belie any suggestion that this is simply an "entertainment" story. If the North Korean government in Pyongyang did commission the hack, as the federal government has now formally alleged, it will and should be treated as an act of state-sponsored terrorism.

Pressed on how and if the U.S. would go about its reprisal, Obama did not provide specifics, but promised, "We will respond proportionally, and we will respond at a place and time that we choose."

Obama's statement today was crafted carefully and delivered a strong message to the North Korean government. Major media companies should take his cue, especially Sony, which should find a way to release The Interview now.