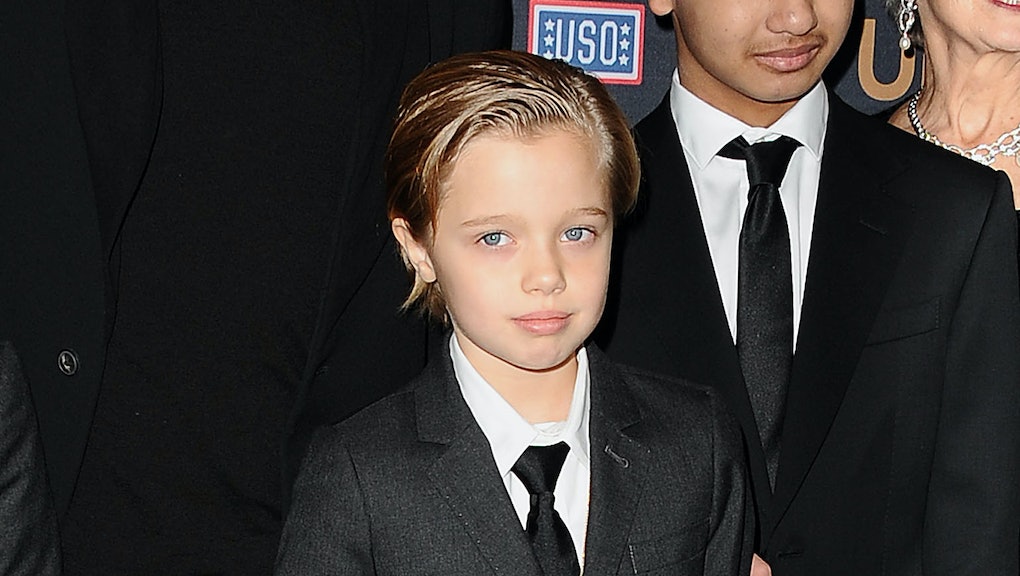 What Our Fascination With John Jolie-Pitt's Gender Says About Us

At last week's premiere of Unbroken in Los Angeles, one person stole the spotlight: Brad Pitt and Angelina Jolie's third-eldest child, who, donning a suit, announced to the world a newly chosen name, John.

In fact, John has reportedly been going by that name since he was 3 years old, which is a credit to his supportive family. And while this recent red carpet outing sparked the media's serious discussion of John's gender, the anecdote is part of a broader and increasingly important conversation about how we continue wrestle with the complex relationship between gender and kids.

Questions abound: Can children play with gender? Should children be allowed to choose a new gender from the one they were assigned at birth? At what age is it ethically viable for a child to choose their gender?

Gender noncomformity has dominated parenting discussions, and educational policies. From school rules determining who can use which restroom, play on which athletic team and how teachers should talk about LGBT issues in the classroom, the debate is here to stay. Schools are trying to figure out how to accommodate trans and gender nonconforming children while providing a comfortable learning environment for all.

In a world where trans youth are at a greater risk for homelessness and harassment than any other community, it's more important than ever to create safe spaces for all kids.

Yet more youth are coming out as trans or as questioning their gender than ever before. They're also coming out at much earlier ages. Dr. Johanna Olson, a medical specialist who specializes in trans youth health care in Los Angeles, sees between one and five new trans kids every week. In an interview with CBS News, she said the increase in trans youth patients "is tremendous. We've had something like a 330% increase over the year of 2013. It's just phenomenal." It's not necessarily that there are more trans kids in number, but now they feel more confident and empowered to express themselves earlier.

Because gender is seen as so foundational to the human experience, debates over transgender and gender nonconforming youth quickly turn towards ethics. Many wonder whether children have the "right" to determine their own gender, even if that gender changes as they grow up. What happens, one may ask, if a child takes hormone blockers to prevent puberty?

Trans and gender nonconforming youth like John represent the reality of gender fluidity. All children, whose prepubescent bodies are not noticeably male or female yet when clothed, are part of this fluidity. Some argue this is why color-coding gender in pink and blue has become so entrenched in marketing, to enforce these divisions that don't necessarily exist.

Bottom line: The public fascination with John is really not about John at all, but rather is about the arbitrary nature of what distinguishes a "boy" from a "girl." The Jolie-Pitt clan has always been about the unity of the human family across all kinds of supposed barriers or boundaries. They have made their own modern family, across race, ethnicity and gender. John is just the latest example of how accepting people and loving them for who they are enriches families and society as a whole.

Discussing gender and children stirs up a host of questions. But in John Jolie-Pitt, we've got our answer, and he's super debonair.