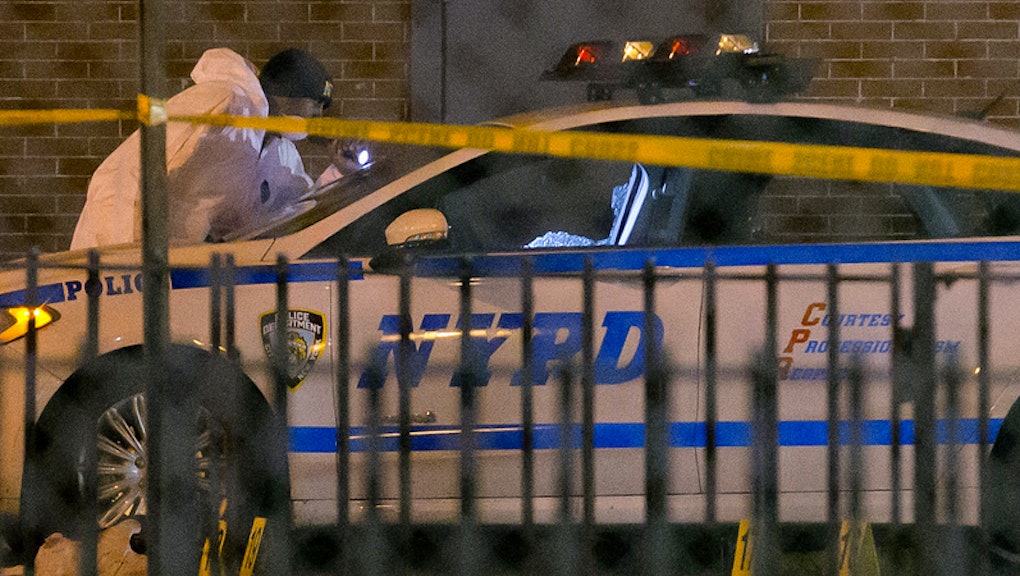 Two New York Police Department officers are dead after being shot while seated in their patrol car. In a press conference following the shootings, Commissioner William J. Bratton declared that the officers "were, quite simply, assassinated."

Officers Wenjian Liu and Rafael Ramos were parked in Brooklyn's Bedford-Stuyvesant neighborhood when a lone gunman approached them from behind, deputy chief Kim Royster told the New York Times. "It looks like they were shot in the upper body," Royster said. Following the execution-style shootings, the first on-duty deaths of New York police officers since 2011, the 28-year-old suspect, identified by the NYPD as Ismaaiyl Brinsley, fled into a subway station where he died from a self-inflicted gunshot wound to the head.

The Guardian reports that the man had shot his girlfriend on Saturday morning. According to the Baltimore Sun, she remains in critical condition. According to Commissioner Bratton, the NYPD had been faxed a warning from Baltimore police about apparent threats the man had made, but they were too late. "The tragedy here is that just as the warning was coming in, the murder was occurring."

The slayings come after weeks of building tensions between New York police and protesters after a grand jury failed to indict a police officer in the chokehold death of Eric Garner. Following the publication of the shooter's unconfirmed motives by the New York Post, the Reverend Al Sharpton issued a statement condemning the shootings: "I have spoken to the Garner family and we are outraged by the early reports of the police killed in Brooklyn today. The Garner family and I have always stressed that we do not believe that all police are bad, in fact we have stressed that most police are not bad."

Members of police unions are less inclined to withhold judgment:

Some local politicians see the shootings as an opportunity to vent frustrations with anti-violence protests that have gripped the city since the Staten Island grand jury's decision not to indict the officer who killed Garner. Brooklyn Republican State Senator Martin Golden said in a statement that "the Mayor needs to act swiftly to ensure that members of the NYPD are safe on the job. We cannot allow our fellow men and women in uniform to be targets of violence. The time for sitting on the sidelines while our city is torn apart is over. Its time for the Mayor and his administration to act. When our police are victims, everyone loses."

In a press conference at Woodhull Hospital, where the two officers were taken after the shooting, Mayor Bill de Blasio declared that "our city is in mourning. Our hearts are heavy ... Every New Yorker should feel that they were attacked, that our entire city was attacked, by this heinous individual. This is an attack on all of us, on everything we hold dear." The mayor became visibly emotional while describing one slain officer's 13-year-old son, "who couldn't comprehend what had happened to his father."

As de Blasio made his way to that same press conference, police showed little interest in the his message of unity, turning their back on the first-term mayor:

Until the suspect is identified and any motives confirmed, however, both sides of what has become a heated debate would do well to heed the words of former New York congressman and mayoral candidate Anthony Weiner: