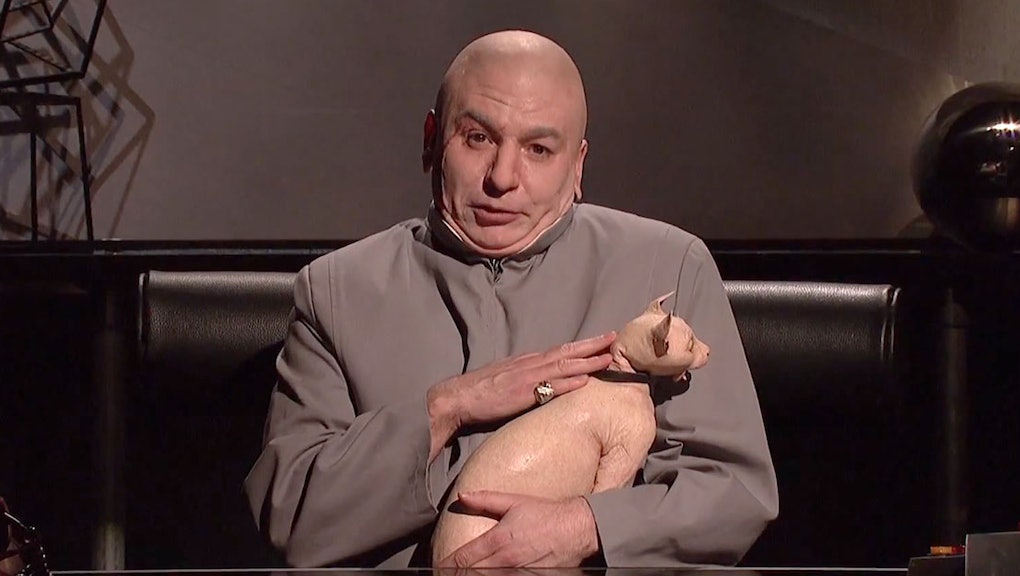 The recent Sony hacks and the ensuing problems with The Interview have raised a lot of questions, specifically: What is actually going on? The whole situation has been so confusing that only one man could really provide us with any answers: Dr. Evil.

On this week's episode of Saturday Night Live, former cast member Mike Myers stopped by to take over the show's cold open as one of his characters from the Austin Powers movies, and he shed some light on this supremely perplexing Sony situation.

"Hello, I'm Dr. Evil. I've preempted this program because I'm furious that North Korea and Sony Pictures have both given evil organizations a bad name. I mean, what the F, people. It's just so pathetic to see you two fight over a silly comedy. It's like watching two bald men fight over a comb ... who cares?"

Myers also took a few jabs at his own movies and raised a question to the hacker group Guardians of Peace that we've probably all been thinking through this whole debacle.

"First of all, the name. When you guys were sitting around and pitching it, was one guy like, 'I've got an idea, let's call ourselves the Guardians of Peace, or the GOP.' Hello!? Way to go a-holes. There's already a GOP, and they're already an evil organization."

While the sketch might not have been the most biting critique of the Sony hacks, it did \add an important dose of humor to one of the strangest news stories of the year.