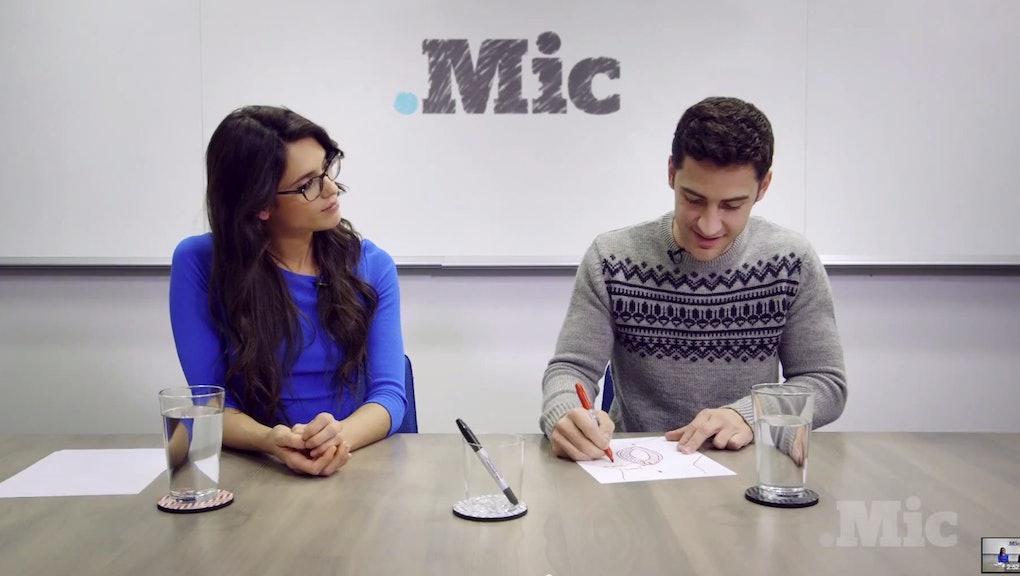 We Asked Men to Draw Vaginas to Prove an Important Point

If men don't know basic facts about a woman's body, how can they legislate it?

Sounds simple enough, and yet this message continues to fall on deaf ears in Congress, where the overwhelming majority of elected officials are still white men.

Take former Arkansas Gov. Mike Huckabee, who suggested that women need birth control because they can't control their libidos. Or former Sen. Rick Santorum (R-Pa.), who claimed there is a link between breast cancer and abortion (pro tip: there isn't). And who could forget former Rep. Todd Akin (R-Mo.) and his infamous "legitimate rape" theory.

America's male elected officials continue to aggressively legislate women's bodies in the year 2014, even though they often seem not to know basic facts about women.

To illustrate why this is a really serious problem, we decided to conduct a special experiment, asking men from Mic to do one simple thing: Draw a vagina. The goal? See how much educated men really know about women's bodies.

The result? It went about as badly as you might have imagined.

First, there was the "No Man's Land":

Then, the very scientific "Pee hole":

Although that was perhaps not quite as bad as the "baby hole":

Or the "vagine bottom:"

And then, there was this very detailed masterpiece:

The real takeaway?  Funny as the video may be, our lawmakers' lack of knowledge about women's bodies shouldn't be laughed off. Clearly, and unfortunately, the average male doesn't know the first thing about a woman's body, and some are suffering the very real negative consequences of this ignorance. Need proof? In 2014 alone, approximately 75% of anti-choice bills — laws that legislate only a woman's autonomy — were sponsored by men.

While the outgoing 113th Congress is the most diverse in history, it's still an old boys club (more than 80% male, about 80% white and an average of 60 years old).

If this video teaches us anything, it's how hard we need to continue to work to change that.