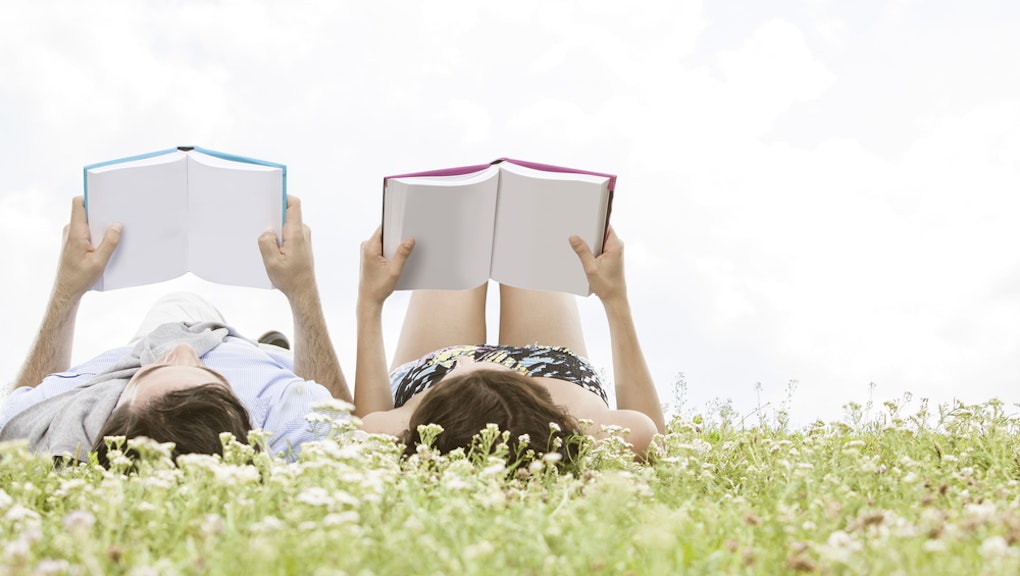 2014 has been a gamechanger for relationships. From Tinder taking over to "ghosting" replacing official breakups, how we date and fall in love have gotten more complicated — and literature has taken note.

Instead of following the tired tropes of traditional romance, this year's new novels, non-fiction and short stories got honest about the not-so-easy reality of modern love. It's often the not-so-pretty parts of relationships that define us, from blinding lust to painful divorce, awkward dates and partnerships without desire.

These 11 passages captured the ups and downs, complications and moments of pure bliss, in the most inventive, non-clichéd ways. Love isn't easy — it's complicated, confusing and even painful. But that's the beautifully honest truth.

1. "What if loving something means you should mostly feel frustrated and thwarted? And then a little ruined, too, by the pursuit? But you keep coming back for more?"

- Chang-rae Lee, On Such a Full Sea

This short story collection released in January made a splash in the literary world for what the New York Times called Lee's preoccupation with "the oft-told tale of the desperate, betraying, lonely human heart."

2. "All we are is eyes looking for the unbroken or the edges where the broken bits might fit each other."

- Ali Smith, How to Be Both

This modernist novel by can be read in different orders and is narrated by two protagonists, each of whom offer modern, radical perspectives of language, art and love. Because what we need from love isn't simple and straightforward.

3. "I deserved kisses. I deserved to be treated like a piece of meat but also respected for my intellect."

- Lena Dunham, Not That Kind of Girl

Dunham is famous for getting naked for her hit TV show Girls, but she strips down in her memoir too by sharing the raw emotional process of dating in your 20s. It's OK to want a sexual relationship, it's OK to want love and wanting one doesn't necessarily imply wanting the other.

- Caitlin Moran, How to Build a Girl

This sexual coming-of-age story is Moran's first fiction, after her inspiring memoir How to Be a Woman. By writing from the perspective of a teenage girl, Moran uncovers some of the complex truths about love and sex that's easy to forget as you grow up.

5. "To love someone is to know that one day you’ll have to watch them break unless you do first and to love someone means you will certainly lose that love to something slow like boredom or festering hate or something fast like a car wreck."

- Catherine Lacey, Nobody Is Ever Missing

In Lacey's novel, released in the summer, the narrator, Elyria, takes a one-way flight to New Zealand, leaving her husband to figure out what happened in her disappearance. Their complicated relationship lends deep insight to the interwoven natures of love and fear. Because love isn't happy-go-lucky all the time.

6. "My intention had not been to find her, for I had been busy being lonely with someone else."

These short stories offer multiple perspectives on love, from this experience of a rebound to a story about an automaton who must reinvent language to accommodate his discovery of love. These piercing stories observe human vulnerability with startling honesty, reminding us that love doesn't always appear in the time or form we expect it.

7. "It felt very good to have him walking beside her. Good like rest and quiet, like something you could live without but you needed anyway. That you had to learn how to miss, and then you'd never stop missing it."

When Lila seeks shelter from the rain in a church, she begins a relationship with the minister that sparks a debate that will reshape the town. As Lila tries to reconcile her marriage with her husband's religion, readers learn about the process of loving and forgiving, one that anyone in a loving relationship will recognize.

8. "We project our feelings onto other people, but there is always a dynamic that creates those inventions. The fantasies are made between people, and the ideas about those people live inside us."

This novel tracks one woman's struggle to be seen in a world twisted by perception, prejudice and desire. Hustvedt explores how desire and truth contradict to create new opinions of those we love. Nobody's perfect, but that's what makes love thrillingly dynamic.

This best-selling novel from the author of Cloud Atlas is the electric story of a runaway teenager with psychic abilities. As her story progresses, the overlapping characters and intricate plot shed light on the complicated nature of human relationships.

10. "First we only want to be seen, but once we're seen, that's not enough anymore. After that, we want to be remembered."

A finalist for the National Book Awards, this dystopian novel shows how relationships can sustain us even in the darkest of times. Love isn't necessarily what we expect it will be, but it can be just what we need.

11. "They never discussed it, but both came to understand it as a promise: He would always make sure there was a place for her. She would always be able to say, 'Someone is coming. I am not alone.'"

- Celeste Ng, Everything I Never Told You

This debut novel tracks how a family comes together after the disappearance of their daughter. When parents have to refocus on their marriage and putting together the pieces, we realize how love isn't a one-time achievement but rather a complicated process. But that doesn't mean it's not worth it.