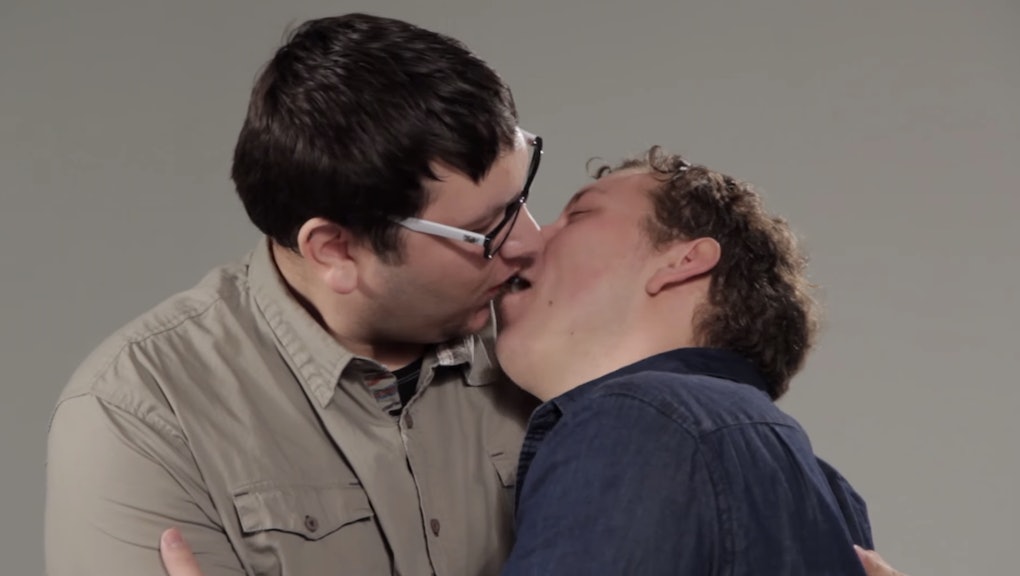 Kissing: It's like one step above a hug, right?

Maybe. But can American straight bros kiss without it "being gay"? Does such an intimate expression have to embody all those traits too often negatively associated with the derogatory phrase "that's so gay" in American culture: Awkward, gross and, worst of all, emasculating?

This is what BuzzFeed attempts to discover as it films three sets of straight men kissing. For all three — the recent acquaintances, the gym buddies and the friends since high school — it's not only their first time kissing one another, but also their first time kissing another male. A take off the viral "First Kiss" videos that hit the Internet earlier this year, the results of the video, "Guys Kiss Guys for the Very First Time," are quite revealing about male friendship.

Before kissing, all the bros explain their feelings about the imminent kiss. Most guys expressed indifference — "I don't think it's going to be that crazy, to be honest" — which could be either a sign of liberal tolerance of same-sex intimacy between two men, or it could be a masculine expression of "playing it cool" so to not expose one's homosexual panic about kissing another man.

That's the problem with this video: Part of the shock and appeal of this video, and a large reason why it was produced, was to play upon cultural homophobia in America — where, unlike in many European cultures, it is not common for two male friends to hold hands or affectionately peck each other on the cheek or lips. It's the same form of latent homophobia that drives buddy or teen comedies, from the American Pie film series to anything James Franco and Seth Rogen do for attention, including remaking Kanye's "Bound 2" music video.

Because the video hinges on the cultural sentiment of internalized homophobia to draw views, the well-intentioned message gets lost in the mix. It's really significant to take stock of the guys' reactions after the "first-time" experience. Post-kiss, the six guys really think the whole thing was no big deal: "He's just my buddy. I gave him a kiss. That's it," one said. Another adds: "I don't think it's a big deal. I think we need to chill out."

American millennial culture has in many ways embraced the sentiment these guys expressed in the rise of the "bromance" culture. "The only guy I was ever attracted to was Justin Timberlake — and I don't know Justin Timberlake," one bearded-bro said at the beginning of the video. As Mic's Jared Keller wrote in a piece about affection in male friendships for Pacific Standard, quoting a recent study in British journal Men and Masculinities, "Ninety-eight percent of the heterosexual men interviewed had shared a bed with another man, while 93 percent had cuddled or spooned with one, evidence of ... 'expansion of changing conceptions of masculinity in contemporary culture.'"

The takeaway, as the video proves, is that straight guys kissing straight guys doesn't make them "gay," literally or metaphorically; it is a sign of affection. What the very creation of the video indicates, however, is that American culture has some deeply ingrained homophobic tendencies. But when two male friends can lightly kiss without it being awkward or gross, or making either of them feel like less of a man, then we've reached a new level of acceptance.