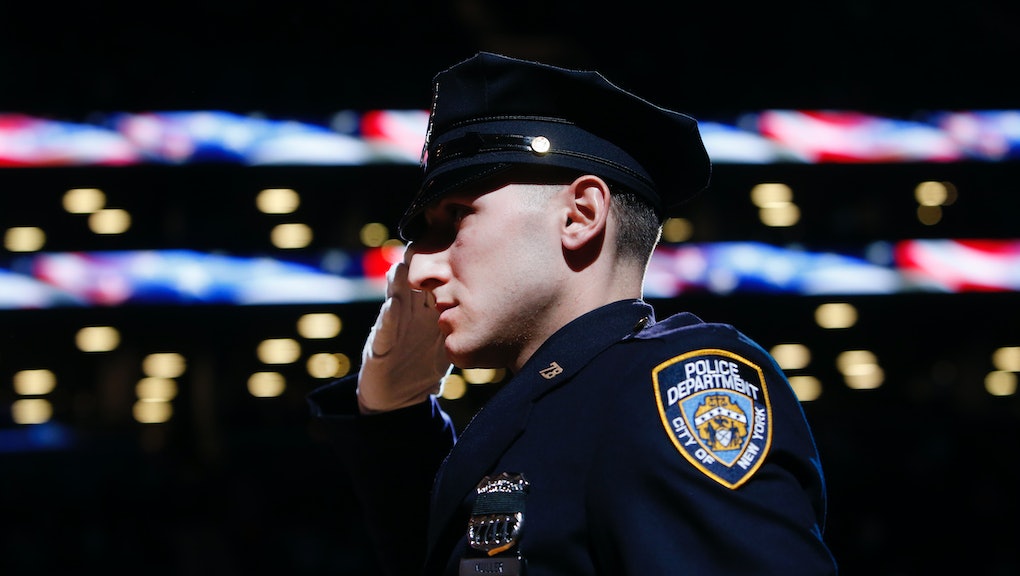 On Saturday, two New York City police officers were shot and killed in the middle of a Brooklyn neighborhood. Mayor Bill de Blasio called the attack an "assassination," while Police Commissioner Bill Bratton mourned the officers, saying, "Two of New York's finest were shot and killed with no warning, no provocation." A candlelight vigil held on Sunday night drew friends, family, colleagues and community members.

Most reports on 28-year-old Ismaaiyl Brinsley, the suspected gunman, painted a portrait of instability and violence. CNN noted that he "posted messages of self-loathing and despair" on social media profiles, while the Los Angeles Times reported that he had a history of arrests and potential mental health issues.

Despite this, the blame game began in full force within hours of the shooting, and the deaths of two police officers were transformed from tragedy into political currency. Fingers were pointed at seemingly everyone besides the shooter himself — neither government officials nor community members were spared, and harsh words flew in both directions.

Patrick Lynch, president of the Patrolmen's Benevolent Association, delivered a searing indictment of the mayor on Saturday. "There's blood on many hands tonight," he said. "That blood on the hands starts at City Hall in the office of the mayor."

The tension stems from the protests surrounding Eric Garner's death; Lynch has accused de Blasio of throwing police officers under the bus and took umbrage with the mayor's admission that he has had to explain to his son Dante, who is black, "how to take special care with any encounter he may have with police officers."

Former New York Gov. George Pataki also tweeted on Saturday that he was "sickened by these barbaric acts, which sadly are a predictable outcome of divisive anti-cop rhetoric of [de Blasio]."

Pataki didn't limit his criticism to de Blasio, however. He also name-checked Attorney General Eric Holder, despite Holder's statement condemning the murders. Pataki's harsh words were apparently in response to the Justice Department's actions surrounding the cases of Michael Brown and Eric Garner; Erick Erickson, editor of RedState.com, told Fox News that Holder's "anti-police rhetoric" had contributed to a climate of fear of police in America.

Even Rand Paul found himself dragged into the melee. Conservative blogger Charles C. Johnson tweeted that Paul's "anti-cop rhetoric" played a role in the killings, while the Daily Beast argued that the senator's efforts at "breaking bread" with Rev. Al Sharpton over police militarization may now come back to hurt him.

Sharpton has long faced criticism for his political and community activism, and Saturday's police shooting has only stoked the fire. Sharpton stated that he received death threats after the killings, while former NYPD commissioner Bernie Kerik told Fox News that Sharpton "[has] blood on [his] hands."

Not content to keep things in New York, various conservative commentators went all the way to the top and blamed President Obama for the NYPD deaths. Former New York Mayor Rudy Giuliani charged that Obama's "propaganda" of telling people to "hate the police" played a role. Erickson put it this way:

The Police Union also blamed protesters fighting against police brutality for the attack, noting that along with Mayor de Blasio, protesters also have "blood on their hands." The group released a statement on Saturday declaring that the NYPD has become a "wartime" police force and will "act accordingly."

This is nothing but finger-pointing to score cheap political points. The overt politicization of the tragedy is perhaps unsurprising, but that doesn't mean it's not damaging. It's similar to the ridiculous blame liberals heaped on Sarah Palin for creating a "climate of hate" after congresswoman Gabby Giffords was shot by Jared Lee Loughner in 2011: reactionary and not entirely rational.

It's natural to want to find somebody to blame after a senseless act of violence, especially when the alleged gunman deprived the public of justice by trial through his suicide. But rhetoric like this only serves to push calmer, more thoughtful voices out of the conversation.

In the wake of the Michael Brown and Eric Garner grand jury decisions, there's a very real tension between police departments and the communities they're supposed to protect in America. The conversation that revolves around these issues needs to continue, but it can't if this sick political blame game is deployed at every turn.

As Brooklyn Borough President Eric Adams said, "Blood is on the hands of one individual — a sick man who did a sick act."