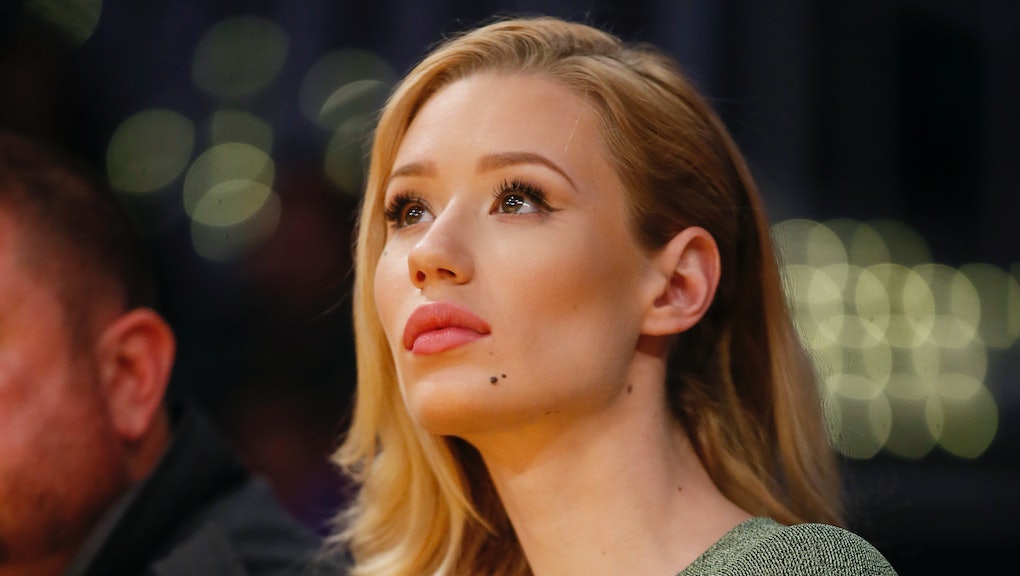 Whenever women with large platforms speak out, some men resort to despicable silencing tactics. Tossing around death threats and sexually harassing their targets, these perpetrators believe that the mere suggestion of violence will be enough to stop women from participating in public forums.

That disturbing trend continued last weekend. Following a Twitter feud between rappers Iggy Azalea and Azealia Banks, hackers threatened to release Azalea's rumored sex tape Monday unless she apologized to Banks for her cultural appropriation within hip-hop and an insensitive response to the Eric Garner case.

It's a sick, desperate way to engage a woman over her public remarks and cannot be tolerated.

The threat emerged from the Anonymous-inspired account TheAnonMessage, which was none too thrilled with how the Australian-born rapper responded to Banks' appearance on radio station Hot 97. During the interview, Banks railed against the dilution of black culture in music and cited Azalea's ignorance as part of the problem — because she remains dismissive about her complicity in cultural appropriation.

Soon after her remarks aired, Azalea decided to address them directly (albeit in a way both clueless and non-responsive to the crux of Banks' critique).

But that's not where it ended. In the hours that followed, others would co-sign with Banks. Among them was rapper Q-Tip, who made an amicable effort to educate Azalea on the social and political history of hip-hop. It was a refreshingly productive continuation of the conversation, but that wasn't enough for TheAnonMessage — one of the largest hacktivist Twitter accounts with upward of 750,000 followers. Instead, the group outright attacked Azalea, calling her a "trashy bitch," and promised her a "one-way ticket to a life of suffering" if she didn't comply with their demands.

The hackers have since been suspended by Twitter, but the damage has already been done. Azalea maintains that no sex tape actually exists. Even if one does, it shouldn't be used to shame or bully her because she's ignorant about racism and cultural appropriation. Using Azalea's sexuality as a weapon won't move her toward accountability and understanding about race and anti-blackness in America, and it derails the conversation entirely.

Unfortunately, this has become all too familiar. The attack against Azalea hearkens back to the aftermath of Emma Watson's speech at the United Nations in September. The actress declared herself a feminist and used her platform to help kick-start the He For She campaign. And although she made an honest effort to engage men around the world to increase their engagement with a broader movement for gender equality, the brutes of 4chan threatened to release Watson's nude photos if she persisted. The whole thing ultimately proved to be a fluke, powered by male trolls on the Internet, but it came just after dozens of celebrities had their nude photos stolen and released online.

As Mic's Elizabeth Plank wrote, this is indicative of a troublesome double standard.

"Just like other crimes against women, nude photo scandals are not about sex, they are about power. ... It's because dangling a picture of a naked man's body over his head would not have the same commanding effect," she said. "The driving ideology is that while he has nothing to be ashamed for, a woman does. We also don't inherently devalue men's bodies the same way we do women's. We still view a woman's body or sexuality as something that she needs to control or hide. Our society gives power to nude photos of women because we inherently view women's bodies as degrading."

These attempts aren't only targeted at rich and famous women like Watson and Azalea; they're also routinely directed at other women online. According to a Pew Research Center study, roughly a quarter of women ages 18 to 24 have experienced sexual harassment and stalking on the Internet. On the whole, women encounter these online ills much more often than their male counterparts. Just as most other men are given the benefit of a lively discussion about their viewpoints, women deserve the same opportunity to engage without being physically or sexually threatened.

No matter how problematic Azalea may be, using her alleged sex tape for blackmail enshrines misogyny by using a woman's sexuality as a weapon for public shaming. Ignoring or endorsing such behavior only reinforces an already toxic cycle — one that continues undermining women everywhere.