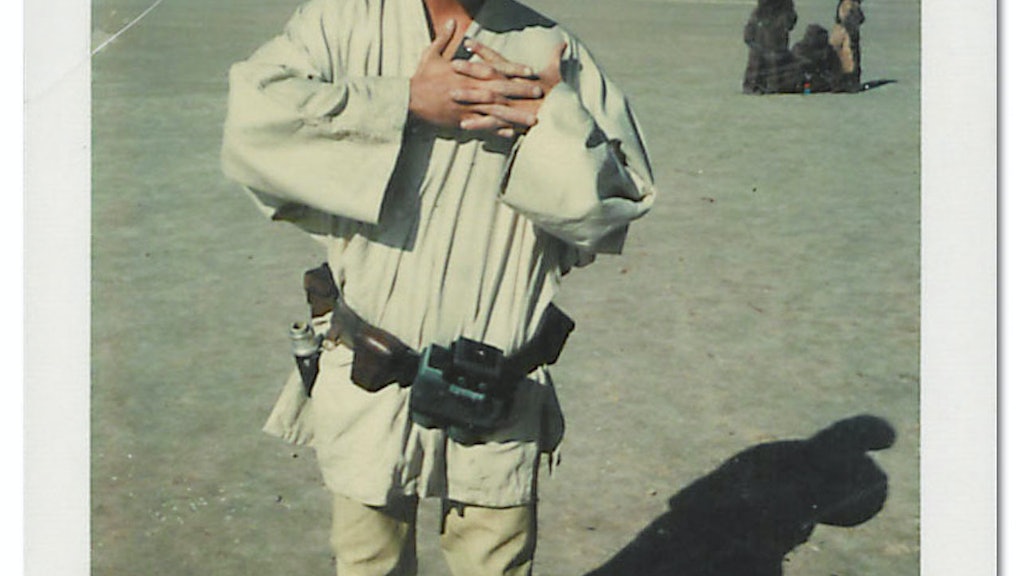 Ready for a throwback to a long time ago, in a galaxy not so far away?

Star Wars fanatics and vintage lovers will go crazy over the On-Set: Star Wars Episode IV: A New Hope exhibit at British Film Institute Southbank. From candid shots of cast members to original script pages, the set gives a stunning backstage look at what was happening when the cameras weren't rolling.

The images are from the personal collection of Ann Skinner, who was the continuity supervisor on the original set of Star Wars. And while we might have to wait until December 2015 for the next Star Wars movie to hit theaters, at least we have these photos to get a glimpse of things behind the scenes. On-Set: Star Wars Episode IV: A New Hope is an incredible peek at the creative process behind putting together a movie that has become a cornerstone of pop culture — it's important because many forget all the parts that have to come together to pull off something so grand.

Here's Mark Hamill, who plays the iconic Luke Skywalker, chilling while on the set of Tatooine. To get that real-dry landscape, they filmed the desert planet's scenes in Tunisia.

Skinner captured these photos of Skywalker's comrades at the Tosche Station on Tatoonie. The station served as a power and distribution center along with being Luke's hot spot to hang out with Fixer (Anthony Forrest), Camie (Koo Stark) and Biggs (Garrick Hagon).

According to Yahoo! Movies, scenes with these minor characters were cut from the film.

What's even more exciting is the inside look at some of the film's villains. Seeing these baddies out of character, both Darth Vader (David Prowse) unmasked and Grand Moff Tarkin (Peter Cushing) cracking a smile, is humorous considering their heinous ways in the stars.

Thankfully they were pretty wicked in the movies — or else Luke wouldn't have had any enemies to use his Jedi fighting skills against.

The script pages themselves have notes scribbled in the margins, showing Skinner's close attention to details and her dedication to making the scenes as cohesive as possible.

On top of the notes she wrote on her script, she also used the photos she took as guiders for setting scenes. If you look closely, you can see her jottings regarding Hamill's position as he's getting attacked by the sand people.

These annotations uncover how careful Skinner was to secure the movie's continuity. Audience members are quick to notice inconsistencies between scenes. With how often watched and critiqued the Star Wars installments are, if mistakes were made they would easily be noticed.

There's also her note about making sure Princess Leia (Carrie Fisher) keeps her bracelet on her right arm for different takes.

The exhibit also shows several shots from the garbage pile scene where Luke Skywalker and company skedaddle down a garbage chute to escape from gunfire.

They may have avoided death by blast rays, but have to fend off the tentacle-whipping dianoga beast submerged under all the rubbish. And if things weren't bad enough, they almost get pulverized when the trash compacter starts running.

Here's the talented Skinner herself, whose strong eye for detail helped ensure the amazingness of Star Wars.

The exhibit, which is just part of BFI's United Kingdom-wide sci-fi season, "Days of Fear and Wonder," runs in the Southbank location's atrium until Jan. 4, 2015. If you can visit, check out collection in person. For those of us who can't, at least we have more than enough time to watch all the Star Wars installments before the next one comes out.