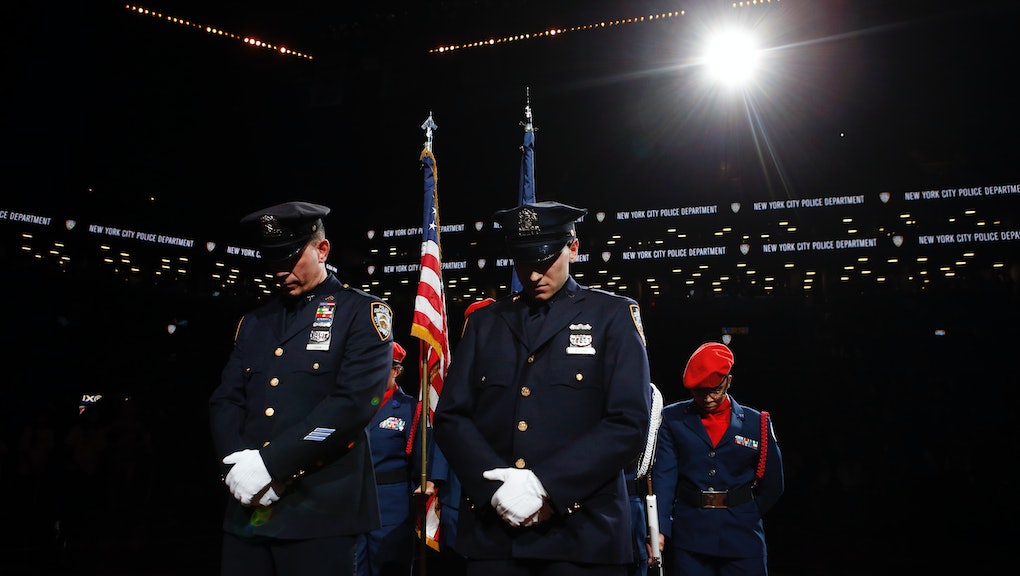 The shooting of two New York City police officers, Rafael Ramos and Wenjian Liu, while sitting in their patrol car on Saturday shocked the city and the nation. But it took less than 24 hours for politics to take over.

This animosity, especially towards a community still frustrated over the Garner case, incited a similarly, if smaller, display of callousness as some took to social media to dismiss and marginalize the officers' deaths. While many rightfully mourned the death of the two police officers who were gunned down for simply doing their jobs, others applauded the shooter for giving the NYPD "what they deserve."

There's one with both of these reactions: As many other protesters and activists have pointed out, these cruel, callous responses misunderstand and misrepresent what it really means to call for justice.

The death of a police officer is never something to be celebrated in the pursuit of justice, let alone as retribution for a totally unrelated crime. Putting a target on the back of all police officers because of the poor judgement of some members of the force is no better than making unfair and unreasonable assumptions about an entire group people because of the color of their skin. Black lives matter, but so do the lives of police officers.

Those who are politicizing the deaths of police officers as an ostensible win for #BlackLivesMatter are missing the point of the movement for police reform entirely. The goal of the protests isn't to eliminate the police force, or to exact bloody vengeance from every police officer who walks the streets. It's to reform an inherently broken system that's plagued by institutionalized racism, inequality and the frequent use of unnecessary force by officers who aren't held accountable by their superiors or the courts, not to arbitrarily mow down hardworking men and women who strive to uphold the law.

If we want to fix that problem, our efforts should be channeled into bridging the gap rather than further widening it. Turning against the system will not fix the system, and the eye-for-an-eye strategy of this shooting incident does not result in clear-cut justice – it results in more deeply cut divisions. While singling out a scapegoat may appear to be a band-aid for an open wound, it doesn't lend itself to healing.

That's because the police aren't the problem: We are. The underlying issue in the Michael Brown and Eric Garner incidents, among others, isn't the police. It's the racism that's deeply and subtly embedded into every institution that composes American civil society, and the racial attitudes that are often manifested in awful police officers (and some good ones) as the primary agents of state force.

As the Atlantic's Ta-Nehisi Coates so aptly puts it, pointing to the police as the problem ultimately just points the finger back at us:

While it may be tempting to push the blame off of ourselves and onto the police, it's important to realize that the police aren't a separate entity. They are a part of the system in which we are all implicated.

Consider this: In 1988, NYPD Officer Eddie Bryne was brutally executed by four men with automatic weapons while protecting the home of a witness against an alleged crack dealer. Rather than eliciting a horrifying backlash against high-risk neighborhoods by law enforcement, or celebratory cheers by those already suspicious of the police, Byrne's death served as a rallying cry to New York authorities and citizens and sparked the city's crackdown on drugs.

There's nothing to suggest that Ramos and Liu were deserving of their brutal execution, or that activists around the country are celebrating this heinous crime. But even if they were, "bad cops" are not the problem that #BlackLivesMatter is trying to address. They are merely a symptom of a larger problem. And you don't cure an illness by fighting one of the symptoms; you have to fight the disease itself.

Correction: Dec. 22, 2014: A previous version of this article included video which misidentified protesters at a Dec. 13th rally in New York City, the same day as the peaceful #MillionsMarchNYC. The video is certainly from that day, but the contingent of protesters featured in that video are black bloc anarchists. We regret the error.