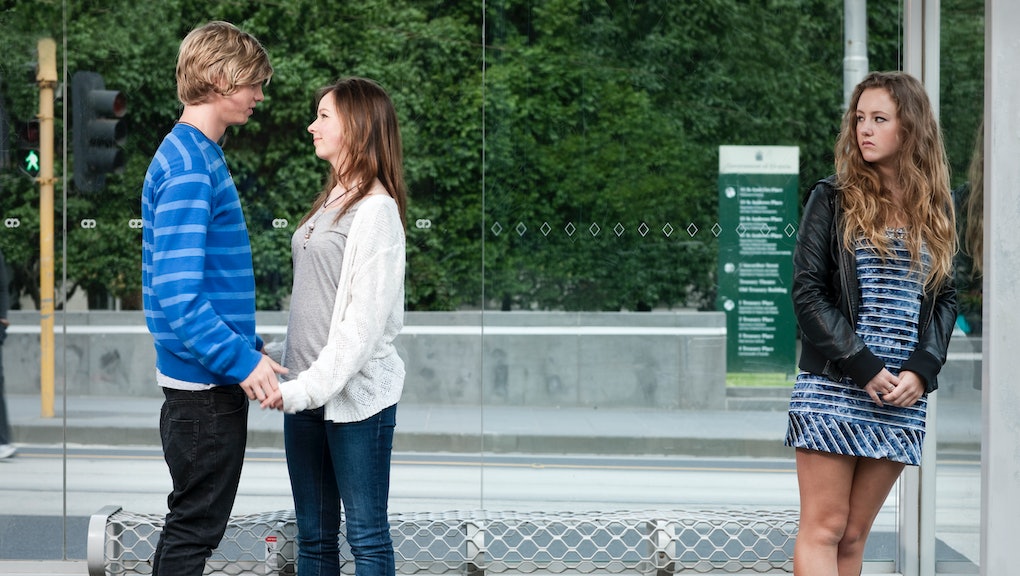 One Surprising Sign Your Relationship Is In Great Shape, According to Science

When it comes to OkCupid relationship questions, some are thankfully straightforward. But one classic OkCupid query isn't as simple as one would think:

Wait, can jealousy ever be a good thing? While plenty of OkCupid users have wondered this aloud, a recent study actually gave us a surprising answer: Yes, it can.

Jealousy has an unexpected upside. The study, published in the Journal of Social and Personal Relationships in November, found that when we're suspicious of temptations around our partner, we switch into "mate-guarding" mode": keeping an eye on them, seeing if anyone else expressed romantic interest in them, spending extra time with them.

Researchers examined 100 heterosexual couples in moments when they suspected their partners were tempted by others and witnessed them spring into "mate-guarding" behavior. The surprising result: The "mate-guarding" was linked to higher commitment on the part of the "guarded" person the next day.

As social psychologist Benjamin Le put it to Science of Relationships, "After you try to protect your relationship, your partner feels more attached to that relationship, for better or for worse."

"Suspicion and jealousy ... are associated with your partner having elevated relationship commitment," he said. Jealousy itself isn't ideal, but if your reaction to jealousy is to draw your partner closer to you, that could have a positive impact on the relationship.

Jealousy can also serve as a wake-up call. As a 2013 study by social psychologist Mark Attridge stated, jealousy is "an emotional response to the real or imagined threat of losing something of value from a romantic relationship." When we realize someone sees value in something that's ours, we step up to prevent it from being stolen. From an evolutionary standpoint, the threat of "mate poaching" serves to remind us what's important to fight for.

It's still better to be trusting than jealous. Jealousy in a relationship isn't a healthy trait to seek out, said Michael Broder, psychologist and author of Can Your Relationship Be Saved?

"I've seen more relationships break up over jealousy than anything," Broder told Mic. Plus, being suspicious of a partner can lead someone to think they can really control the other person — a surefire fallacy. "If someone is going to stray, they'll find a way to do it. I've never seen anyone keep someone monogamous just by laying a trip on them," Broder said.

Jealousy, according to human development and family studies professor Lauren Papp, is only healthy in small doses. Possessive behavior that goes beyond your basic mate-guarding is proof of insecurity about the relationship, which is bound to do more harm than good. While some people think jealousy is a sign of caring, it's often a sign of mistrust, Broder noted.

It's what you do with jealousy that matters. We're only human. "If you had a partner who did not find others to be attractive, either he's lying or there's something wrong with him, because it's just the nature of things," Broder said.

Suspicion and jealousy can be channeled for positive purposes: Instead of seeking control, solid couples will use it to open an honest dialogue about whom they find attractive. "If you can share with your partner that you find people attractive, it strengthens the intimacy bond," said Broder.

That's obviously not an excuse to get possessive, stalkerish or angry. But it could be an opportunity to draw a little closer to your S.O. That twinge of jealousy you feel guilty about might be a good excuse to step up and prove to your boyfriend or girlfriend you're in it to win it. After all, it worked for Chuck and Blair...