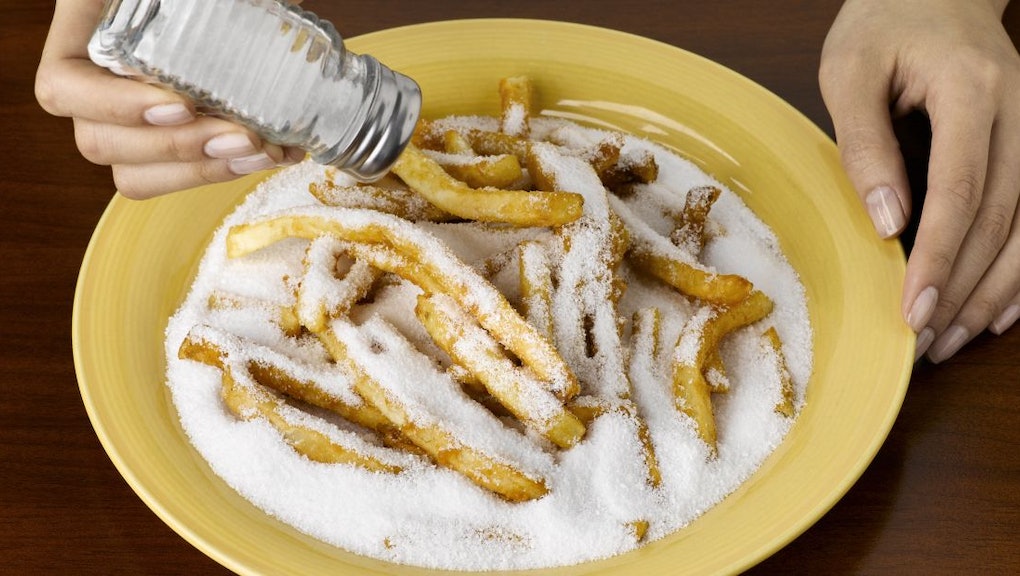 2014 brought bad news for coconut water drinkers, not to mention diet soda addicts and those who love "Skinny Girl" drinks. But when it comes to salt, enthusiasts could be happy about the latest science. Apparently, twice the recommended amount of salt could be good for you.

Newsflash: More salt might actually be good for you. Several studies released this year shook up the conventional wisdom about salt: Too much sodium in our diet increases risk for high blood pressure, stroke, heart disease and more.

But a study published in the New England Journal of Medicine in August found that the salt intake recommendation from the Centers for Disease Control and Prevention might actually be too low, leading to risk of cardiovascular events and mortality (more so than high levels of salt intake).

The study, which tested 101,945 participants from 17 countries over the course of three years, found that individuals who consumed less than 3,000 milligrams (or 3 grams) of sodium per day had a 27% higher risk of dying from a heart attack or stroke than those who consumed 3,000 to 6,000 milligrams (3 to 6 grams) of sodium daily. In other words, more salt could be better for you.

The authors also concluded in a separate study that the more you reduce your sodium intake, the less of a benefit you will see as far as blood pressure is concerned. Sodium is indeed associated with blood pressure, they found, but the relationship can't be charted with a simple, conclusive line.

More good news: Another study published in the American Journal of Hypertension this year found that the average daily sodium intake of most Americans, which is double the recommended amount, is actually associated with better health outcomes.

Not everyone's ready to shake off those health concerns. The American Heart Association, which recommends less than 1,500 milligrams (1.5 grams) of sodium per day for heart health, rejected the findings published in the New England Journal of Medicine. The American Heart Association president and Harvard Medical School professor Dr. Elliott Antman expressed doubts over the study's "methodological issues," namely its use of urine to measure sodium.

But Dr. Andrew Mente, one of the leading authors of the study, told Mic that the current recommendations are unsafe based on his findings. The criticism of the study, he said, was coming from those didn't want to see their own positions questioned and said that the issue was being politicized.

The study is not the first of its kind to rile up heart experts. In 2013, the Institute of Medicine, which advises Congress on health issues, concluded that there was not sufficient evidence to prove that reducing sodium intake below 2,300 milligrams reduced the risk of heart disease.

Within the same week, the journal that published Dr. Mente's research released a study concluding that salt kills 1.65 million people a year worldwide, and it attributed the death rate to sodium consumption above 2,000 milligrams (or 2 grams) a day. This study was embraced by the American Heart Association.

Can we pour it on in 2015? Clearly, cardiology experts will be rethinking the recommended sodium intake for the next few years. Salt's been in the nutritional spotlight since the 1980s, when science took its first stabs at sodium consumption recommendations. Since then it's only become a more hot-button issue, as low-sodium fad diets took hold and processed foods simultaneously became increasingly common staples in Western diets.

The jury is still out on salt's health impacts, but there's a good chance we can feel good about how we're eating salt already.

Americans consume double the recommended amount of sodium, according to the American Heart Association; but that's actually close to what we should be having, according to the new studies. Said Dr. Mente, "Until we get more data, people should be consuming between 3 and 6 grams per day ... which is what 75% of the population is eating anyway."