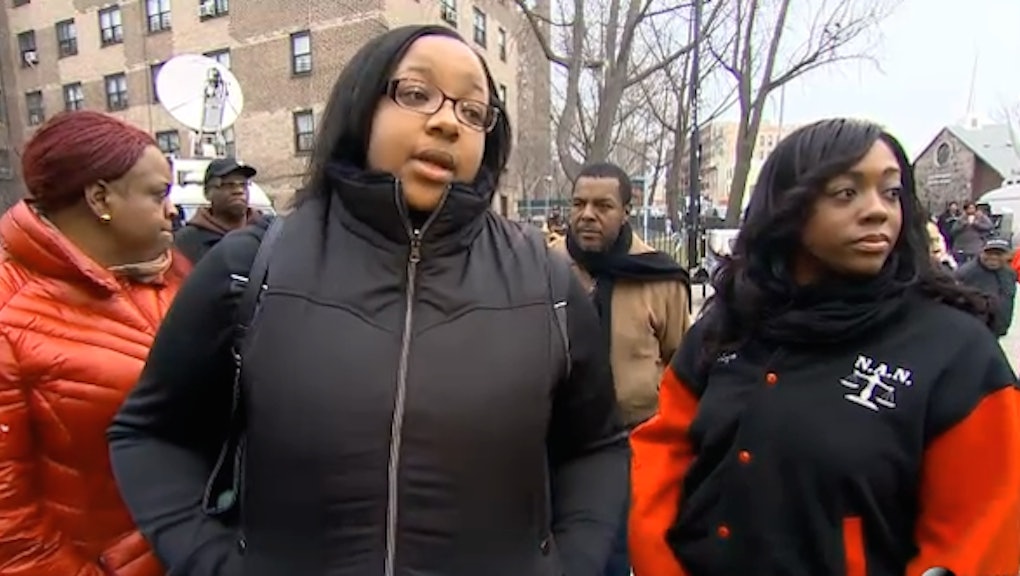 The news: In the wake of Saturday's assassination-style "execution" of two NYPD officers by a man who claimed to be retaliating for the death of unarmed Staten Island resident Eric Garner at the hands of that same agency, the nation is still reeling to figure out what the brutal crime means.

But one person who has suffered the same pain as the families of Officers Rafael Ramos and Wenjian Liu has been quick to express solidarity: Emerald Garner, the late Garner's daughter.

On Monday, Emerald Garner came to the New York City Police Memorial with a wreath to pay her respects to the two officers who died in the line of duty. She told reporters that even after the death of her father, she held no grudge against the department that took his life. Instead, Garner spoke of the importance of avoiding senseless violence.

The response: "I just had to come out and let their family know that we stand with them, and I'm going to send my prayers and condolences to all the families who are suffering through this tragedy," Garner told ABC News. "I don't feel conflicted because I was never anti-police. Like I said before, I have family that's in the NYPD that I've grown up around, family reunions and everything, so my family, you know, we're not anti-police."

Garner's mother, Gwen Carr, echoed her words over the weekend, telling reporters that "I'm standing here in sorrow about losing these two police officers. That was definitely not our agenda. We are going in peace and anyone who is standing with us, we want you to not use Eric Garner's name for violence, because we are not about that."

The takeaway: By expressing sympathy for the families of the slain officers, Garner's family is making a powerful statement on the necessity of non-violent change. The last thing New York needs is a "wartime" mentality.

It's also a reminder that despite the blame game police unions and their conservative allies are already playing, peaceful protesters don't deserve to have fingers pointed at them for the actions of a killer who spoke for no one but himself. As tensions between police and protesters rise, innocent people are getting hurt. The public deserves cops that respect civil rights, and the police deserve to expect to survive their shifts.