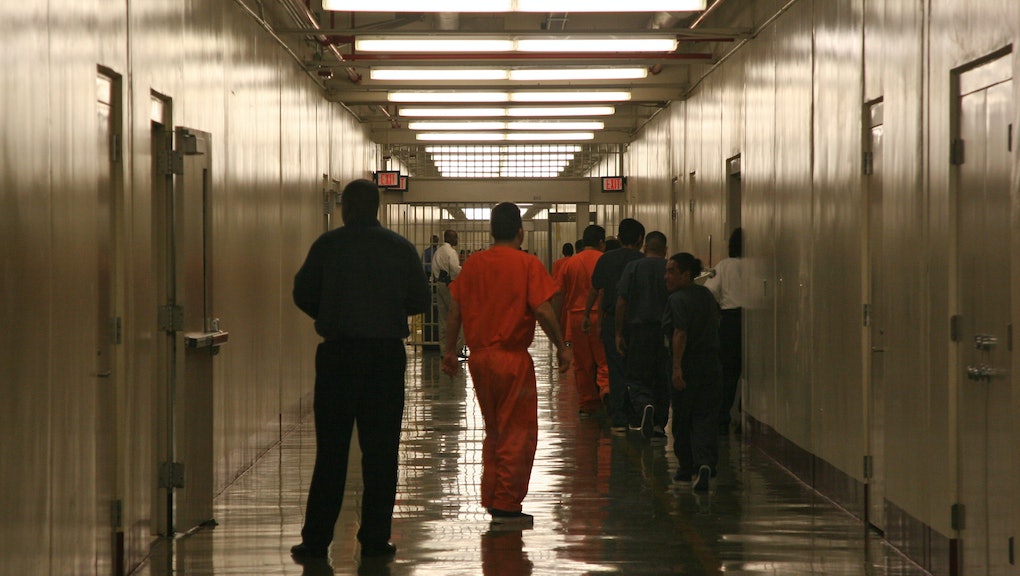 You've never seen America's incarceration rate quite like this.

Thanks to one Twitter user, we now have a clear and troubling illustration of the rate of imprisonment in the United States. Stretching from 1980 to 2013 and sourcing its numbers from the Bureau of Justice Statistics, the GIF shows the number of prisoners per 100,000 American residents. Although the incarceration rates differ from state to state, the nationwide trend is clear: America's incarceration rate has skyrocketed, and our prison population has become absurdly bloated.

While it's common knowledge that the United States has a disproportionately high incarceration rate — it's the highest in the world, about five times the average for the industrial world — the GIF throws the pattern of growth into sharp relief. In 1980, for example, the numbers were relatively low across the entire country, but by 2013 the map was full of various shades of red.

The difference, Schoenfeld notes, is that the U.S. "imprisons more types of criminal offenders, including non-violent and drug offenders, and keeps them in prison longer." With the violent crime rate on the decline — it fell from 747.1 per 100,000 inhabitants in 1993 to 386.9 in 2012, according to the FBI — non-violent crimes, particularly drug-related ones, are lurking directly below the surface of America's skyrocketing incarceration rate.

In fact, the first few years tracked by the GIF directly coincide with the rise of the Reagan-era "War on Drugs" — an effort that has been deemed a failure by many accounts, chiefly because of its connection to the country's high imprisonment rate. According to the Bureau of Justice Statistics, the adult arrest rate for drug possession or use increased by 138% between 1980 and 2009, while the juvenile arrest rate increased 33%. As the Washington Post reported in 2008, "Of the 1.5 million Americans arrested each year on drug offenses, half a million are incarcerated."

But it doesn't affect everyone equally. Minority populations, particularly men, are disproportionately affected by mass incarceration. According to the Pew Research Center, black men were six times more likely than white men to be incarcerated in federal and state prisons or local jails in 2010 — an increase from 1960, when they were five times as likely as white men to be imprisoned.

The connection between the drug war and incarceration plays a role in this discrepancy, too. Despite the fact that white and black populations use marijuana at roughly the same rate, black Americans are 3.73 times more likely to be arrested for its possession, according to the American Civil Liberties Union. Drug offenses accounted for 27% of the total growth among black inmates in state prisons between 1990 and 1999, versus 14% of the growth among white inmates, the Department of Justice reported.

As legal scholar Michelle Alexander told NPR, "Our system of mass incarceration functions more like a caste system than a system of crime prevention or control."

It has very real consequences. Schoenfeld highlights the high cost of incarceration, and she's not wrong. As of 2011, it cost almost $29,000 per year to incarcerate someone in a federal prison — money that could be better spent on social programs, education or any number of other initiatives.

The real price, however, is paid by inmates themselves. Discrimination based upon the possession of a criminal record is real, and can include employment and housing discrimination as well as a lack of voting rights and access to jury service.

"Once you get into the system, you're pretty much locked in, unless you really have the resources around you to pull [yourself] up," James Cannon Jr., an ex-offender who now works as an advocate against felon discrimination, told the Huffington Post. "And not many people who fall into a criminal lifestyle have the support to get back up."