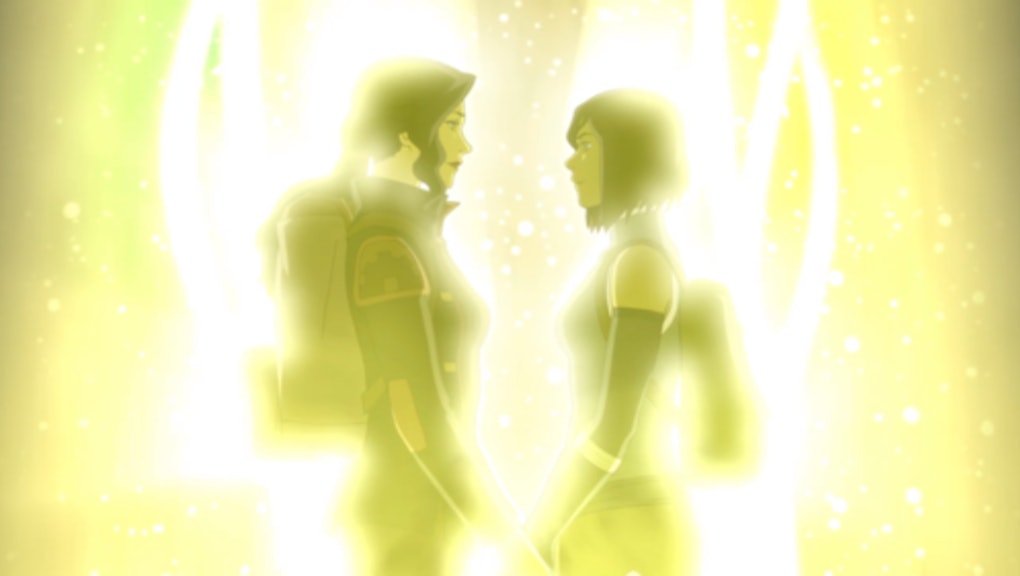 There's always room for a happy ending — especially when it makes a statement about inclusion and love.

And during the closing moments of Nickelodeon anime sensation The Legend of Korra, the show's writers delivered big time. In the series finale, it's made abundantly clear that two of the show's main characters, both of whom are women of color, have fallen in love.

It's a refreshing end to the action-adventure series, which went beyond offering empowering portrayals of women to pointedly acknowledge that a broad spectrum of romantic relationships indeed exist. And the manner in which it was depicted shows that it's possible to discuss queer identities with children in a way that's both accessible and age-appropriate.

Before the big reveal that they're indeed a couple, the series depicted a developing kinship between the title character and her group of friends as they navigate the ups and downs of a fantasy universe. Korra, the show's central heroine, is a warrior and spiritual figure who has been designated to help maintain balance in a world filled with unrest and social ills. Supporting her along the way is her small group of friends, which includes two brothers and another female friend, Asami.

Through many tribulations and triumphs, Korra ultimately concedes defeat toward the end of a battle that was virtually impossible to win — and during which a new portal opened to the spirit world. In that moment, she and Asami decide to go together.

And they go, looking longingly into each others eyes, holding hands, united in their love for each other.

This almost never happens on an animated television show created for children. But that didn't stop the show's creators from allowing the final frames to beautifully reveal a truth that had been bubbling beneath the surface for quite some time.

After the episode aired last weekend, many fans reacted with amazement and others were left wondering if they actually witnessed a same-sex couple emerge from the Nickelodeon series. Putting an end to all speculation, the show's creators both penned personal reflections online about it.

"You can celebrate it, embrace it, accept it, get over it, or whatever you feel the need to do, but there is no denying it. That is the official story. ... Korra and Asami fell in love," co-creator Bryan Konietzko wrote. "Were they friends? Yes, and they still are, but they also grew to have romantic feelings for each other."

He noted that the potential storyline was loosely conceived as the series was first written, though not as the endgame. But because that plan involved a same-sex relationship, they thought they'd never get away with depicting it on a children's network. So, instead, they allowed the characters to develop in a way that was natural and authentic — just as people do in real life. And it arrived at this groundbreaking moment, which challenges heterosexual norms on television, especially for female lead characters.

"I love how their relationship arc took its time, through kindness and caring. If it seems out of the blue to you, I think a second viewing of the last two seasons would show that perhaps you were looking at it only through a hetero lens," Konietzko wrote.

Adding to this dynamic and diverse portrayal is the reality that both characters in this couple are visibly women of color. Korra's depiction is inspired by Inuit tradition on the show, with Asami representing elements of culture in Hong Kong. The layers of diversity present — a show with strong females, people with various ranges of ability and the strong presence of people of color — keep in line with the creators' intent for the series to seamlessly address issues of justice, equality and cross-cultural understanding.

The power of this moment cannot be understated. It sends another strong message that it's possible for TV networks to make diversity a hallmark of children's programming and, really, all shows. In that sense, Korra has indeed been legendary.