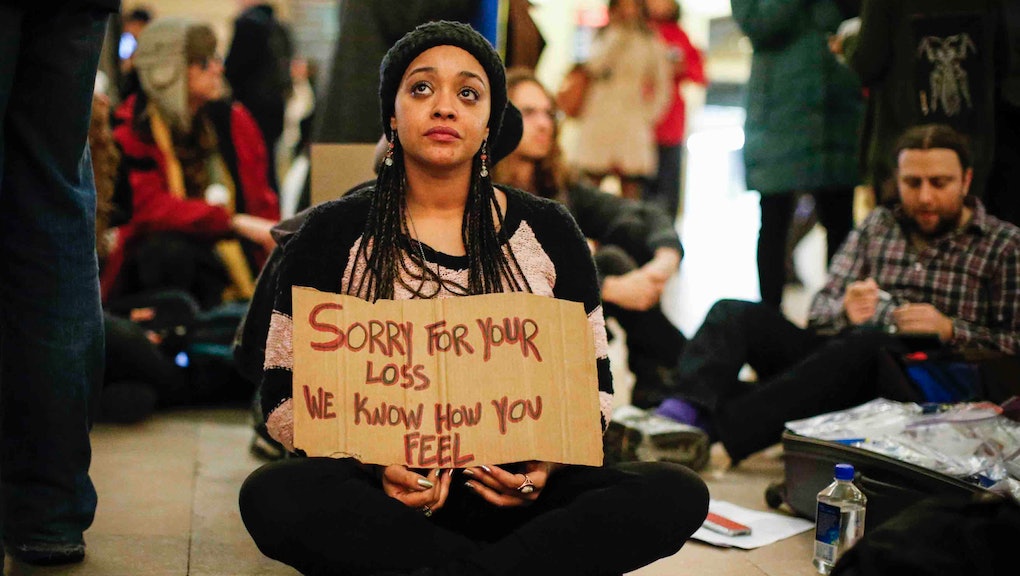 Why New York's Police Protests Must Continue — Now More Than Ever

New York City is on edge.

In the weeks since the non-indictment of the police officer who put Eric Garner in a fatal chokehold, the city has been awash in countless protests and quickly become the epicenter of a national clash over police brutality and discrimination.

On Saturday, the shocking murder of two New York City Police Department officers sitting in a patrol car in Brooklyn prompted a dramatic shift in the city's atmosphere, leading Mayor Bill de Blasio to call for a suspension of protests until after the officers have been laid to rest.

While de Blasio's call for calm is well-intentioned, his shift in focus from the actions of the police to those of protesters lends legitimacy to the misguided notion that the killings were in any way connected to the protests against police brutality.

The mayor versus the NYPD: The officers' deaths also provided ample opportunity for some extraordinary politicking. Soon after the shooting, Pat Lynch — the inflammatory president of the Patrolmen's Benevolent Association, the largest and most powerful police union in New York — tied the gunman to protests and the mayor, claiming that there was "blood on many hands tonight," including "those that incited violence on the street under the guise of protest" and that it started in "the office of the mayor."

Another police union, the Sergeants Benevolent Association, echoed the sentiment:

When de Blasio entered a hospital to pay his respects to the slain officers, a number of police officers literally turned their backs on him.

De Blasio's reaction to these theatrics has been driven by a fear of the police and desire for political self-preservation. On Monday, hours after Police Commissioner Bill Bratton said that "the targeting of these two police officers was a direct spin-off of this issue of these demonstrations," de Blasio opted to ask citizens to "put aside protests" and politics for the time being.

The protests should continue: While on the surface de Blasio's remarks come across as a high-minded attempt to establish unity in a city defined by widening rifts, his bid to quiet protesters lends credence to the narrative that the protesters are in some way responsible for the actions of an isolated, unhinged gunman. The last few weeks of protest have been about racial discrimination and corruption in criminal justice, not generalized anti-police sentiment. The tragedy of two police officers murdered by a lone actor should not in any way temper that agenda.

De Blasio's suggestion that their protests would in some way be disrespectful to the deaths of these police officers subtly conflates the #BlackLivesMatter movement with hostility toward the police as an institution. In other words, de Blasio has chosen to embrace the NYPD's politicization of the officers' deaths, as they launch a bid to seize control of a narrative that they feel has stained their profession. There's an irony here: de Blasio's request to set aside politics has injected politics into what was otherwise considered a senseless tragedy.

The mayor's attempts to woo the police should not be surprising. In America, police officers are esteemed in much the same way as members of the military. For exactly the reasons that Democrats find it so difficult to be critical of war without being smeared as anti-military, de Blasio has backpedaled on the issue of reevaluating law enforcement practices in the wake of the officers' deaths and chosen to be deferential to the NYPD.

De Blasio's balancing act: Prior to last weekend, de Blasio's struggle to maintain a consistent stance on his administration's response to the Garner protests was already evident. After the announcement that the officer who killed Garner would not be indicted, de Blasio offered solidarity with protests and spoke eloquently about his personal concern with discrimination in law enforcement, most strikingly by voicing concern over the fate of his biracial son in a city that often brutalizes its black youth.

But de Blasio has also been fighting in federal court for legal cover to arrest protesters en masse without warning, according to Gothamist.

Another contradiction became apparent right after de Blasio was elected, when he selected Bratton as police commissioner, who was a chief architect of New York's notorious stop-and-frisk policy in the 1990s — the very policy de Blasio promised to dismantle during his mayoral campaign.

There's no doubt that de Blasio's job is extraordinarily difficult right now. The city is reeling, and the mayor needs the support of the police to govern effectively. But de Blasio's tacit link of legitimate citizen dissent to the brutal murder of two police officers casts a shadow over a deeply important cause and mode of free expression that is under no obligation to slow or quiet down.