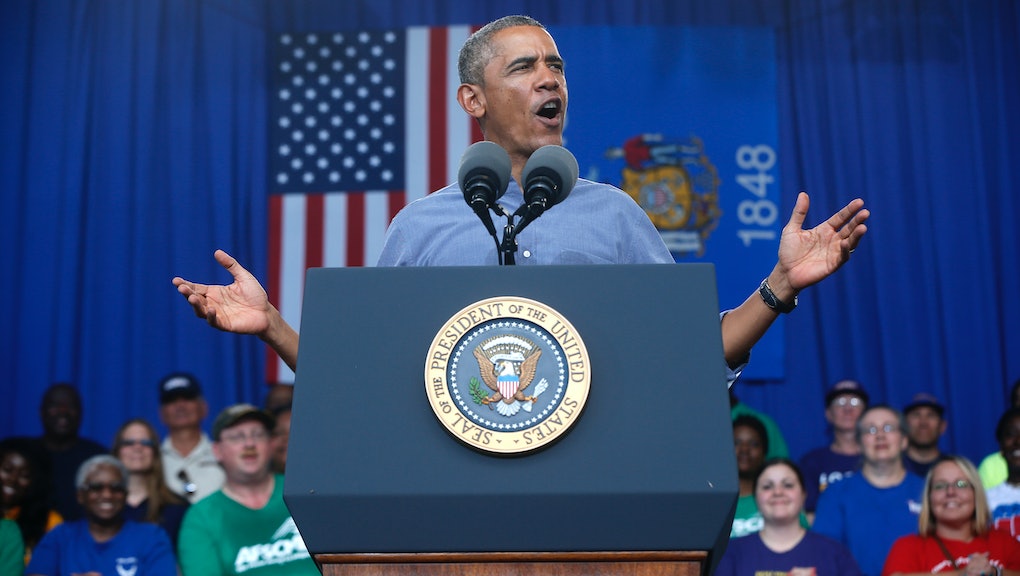 Entering his seventh year in the White House, President Barack Obama might be the most photographed human being on the planet.

But for every shot of a baby kissed or foreign dignitary greeted, there are a few dozen more photos that don't land next to the headline of the day. And, unlike even a decade ago, those stray snaps — some funny, others poignant and a whole lot just plain weird — are available with a minimal amount of digging.

So, as 2014 draws to a close, we went back and gathered some of the best overlooked presidential photography of the past year. Many of the photos below come from the prolific Pete Souza, the official White House photographer. Enjoy!

Tossing a political football in the Oval Office, Jan. 6

Studying the lunch menu at the Coupe restaurant in Washington, D.C., where he met with "five young people" to discuss Obamacare, Jan. 10

Taking the lead in a frank discussion with Ukraine's post-revolution prime minister, Arseniy Yatsenyuk, in the Oval Office

Squaring up to Jaren Paul Suber, a 14-year-old Make-a-Wish recipient from Texas, March 20

Signing items backstage at the Palais des Beaux Arts in Brussels, March 26. Never mind the (stuffed) giraffe in the box.

Shaking hands with Pope Francis on March 27. During his visit, Obama and the pope discussed the U.S. relationship with Cuba. Francis would eventually write letters to both Obama and Cuban President Raul Castro urging new conversations. On Dec. 17, the governments announced the framework for reopening diplomatic ties after more than a half-century. The Vatican (along with Canada) hosted talks, with Francis and his staff working closely with the negotiators.

Saying goodbye to a departing Secret Service agent, June 23. The agent's son, faceplanting into couch, is not impressed.

Getting back to business after speaking with a new and very excited group of 2014 White House spring interns, April 16

Gazing into the distance, alongside the Easter Bunny, as Cam Anthony sings the national anthem before the annual Easter Egg Roll, April 21

Contemplating a bobblehead doll of himself, May 14

Speaking with World War II veteran Kenneth "Rock" Merritt aboard Marine One after departing a ceremony marking the 70th anniversary of D-Day at the Normandy American Cemetery and Memorial in Colleville-sur-Mer, France, June 6

Stepping off Air Force One in Dallas to greet an ecstatic and awed Texas Gov. Rick Perry, July 9

Feeling the love at Milwaukee Laborfest at the Henry Maier Festival Park in Milwaukee, Sept. 6

Checking out some Gap swag for the first daughters during a trip to New York, March 11

Cuddling with a koala at the beginning of the G20 Summit in Brisbane, Australia, Nov. 15