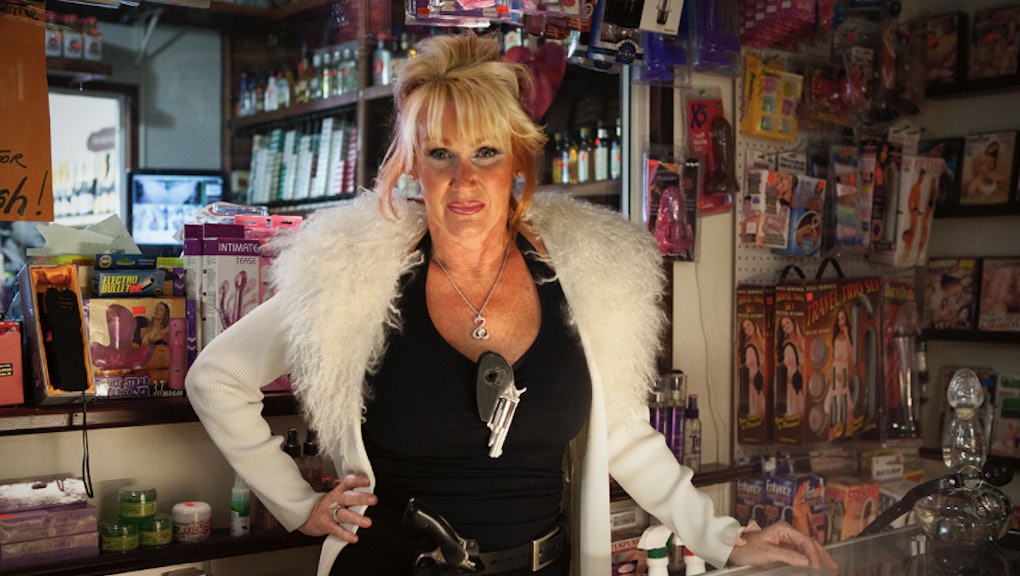 Forget what you think you know about gun culture in America.

Men, as it turns out, aren't the only ones toting their weapons.

Exhibit A: Photographer Shelley Calton's photo series "Concealed," which features women proudly posing with their guns. The subjects are diverse, including a school teacher, a stay-at-home mom and even a criminal court judge. But the women share an ability and overt willingness "to protect themselves and their families should the need arise," Calton told Mic.

A freak accident became inspiration. Calton grew up in Houston, which, as she writes on her website, "was synonymous with an induction into Texas gun culture. [Guns were] a part of growing up in my household."

While guns were omnipresent during her childhood, Calton writes they played a "minimal role" in her adult life. That changed when a friend had a harrowing encounter with an accidentally discharged gun.

"A friend's startling experience in a hair salon, of a woman's handgun accidentally going off and the bullet ricocheting around the salon, was a catalyst for my renewed interest in firearms in today's culture and specifically in women who carry concealed handguns," Calton told Mic.

Calton began photographing women within her circle and expanded outward from there, capturing women in Texas with handgun licenses.

These women aren't your typical Southern belles. "They are comfortable, confident and proficient with their guns, as many practice shooting regularly. They hope to never have to pull their guns, but are prepared to do so," Calton told Mic.

The women's unapologetic passion for firearms is mirrored in their bold, forward-facing poses. Their facial expressions seem to challenge viewers, as if to say, "You got a problem?"

Gun enthusiasts would certainly say no, no problem at all. If anything, these women are proof that guns can be empowering parts of a feminist, alpha-female movement.

Whether you agree with that argument, one thing is certain. These photos upend traditional notions of who, exactly, is locked and loaded in America. While gun ownership remains predominantly male-oriented — 3 out of 4 gun owners are men — women, like those featured in "Concealed," aren't shying away from firearms.

If anything, they're confidently emerging from the shadows, embracing their pieces. They're ready to pull the trigger if need be. And they don't care if that makes you uncomfortable.