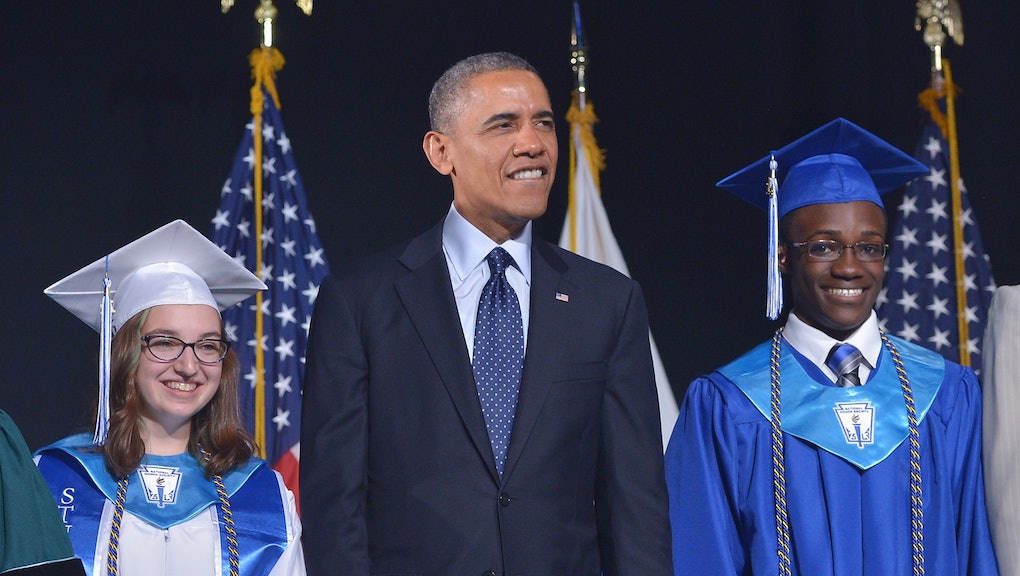 Earning that spot at the top of the class wasn't a fluke, but you might have achieved it for unexpected reasons.

Your innate understanding of calculus? Your ingenious take on English literature? Probably not.

It's not all about your IQ. In the U.S., we've considered intelligence the primary indicator of academic potential. But some experts think it's time to let go of the notion that brains and book smarts always go hand in hand.

The first IQ test, the basis for the Stanford-Binet Intelligence Scales, was originally developed in the early 20th century to expedite the placement of children in special education programs. "One way or another," said Poropat, "intelligence tests were always designed to measure academic performance, and personality tests never were."

It is about discipline. Conscientious people are disciplined about achieving goals. High levels of open-mindedness relate to curiosity and acceptance of new ideas. Someone with both traits approaches challenges with a determined yet flexible attitude. In other words: They try and try again.

Poropat said his findings, published in August's Learning and Individual Differences, have surprised other psychologists, who have trouble consciously uncoupling intelligence and academic success. Teachers, however, don't bat an eye. Educators can more easily distinguish personality traits that other people might associate with intelligence. Openness is a good example. How often do intellectual voracity and high intellect not overlap?

"We intuitively think that [openness and intelligence] ought to go together," said Poropat. "But what it seems to be is that they're not the same thing, and what matters is how one apply these qualities — if you're not interested in deep learning, no one's ever going to see the extent of your intelligence."

Being born brilliant doesn't cut it. Poropat's work lends statistical support to a school of thought embraced by researchers and thinkers who want to redefine the relationship between success and intelligence, both in the classroom and in the workplace.

People either have a fixed mindset or a growth mindset, according to Stanford University psychologist Carol Dweck, who frames intelligence as a quality that can be enhanced through persistent effort. While those with fixed mindsets believe success hinges on innate, unchanging ability — you have it or you don't — people with growth mindsets implicitly see intelligence as something to hone. As a result, they care less about seeming smart and more readily flirt with failure, an attitude that primes them for success.

And then there's the school of "grit," the word psychologist Angela Lee Duckworth uses to characterize perseverance and passion for long-term goals (see video below). While looking at study habits of Scripps National Spelling Bee contestants a few years ago, Duckworth saw that deliberate, focused practice did indeed make perfect. The more time kids devoted to structured studying, the further they got in the spelling bee. Regardless of whether they enjoyed reciting Greek roots ad nauseam (and they didn't, Duckworth found), the best spellers just kept going. That's grit in action.

When it comes to theories of success, the list of scientists and other public intellectuals in the "personality matters most" camp gets long. The positive psychologist Martin Seligman has tried to make character-building a benchmark of education reform. Then there's Malcolm Gladwell, who's argued against the "talent myth" and depicted exceptional success as mainly the product of enormous time commitment. Even self-described "tiger mom" Amy Chua, a champion of academic merit if there ever was one, hammered home the primacy of perseverance.

The ticket to success? Get more conscientious. Teachers can help students change their behavior — the clearest indication of personality — which in turn improves students' chances of success, in school and afterward. Poropat thinks this is where his work meets real life.

He doesn't bemoan brilliance as useless or even advocate for a personality-based college admissions system (though a number of high schools and colleges have moved in that direction). Choosing which students receive stock rejection letters, Poropat believes, should rest on something less subjective, and fraught with bias, than personality assessments.

But perhaps it's time to challenge the viewpoint underlying the common belief that aptitude deserves praise and attitude gets a pat on the head. While it doubtlessly takes more than plugging away to break ground in particle physics, MENSA membership may be no more critical to the nebulous idea of "success" than an irrepressible, can-do spirit. Becoming a genius is a futile goal, but anyone can get "grit," and that's a worthwhile aspiration.