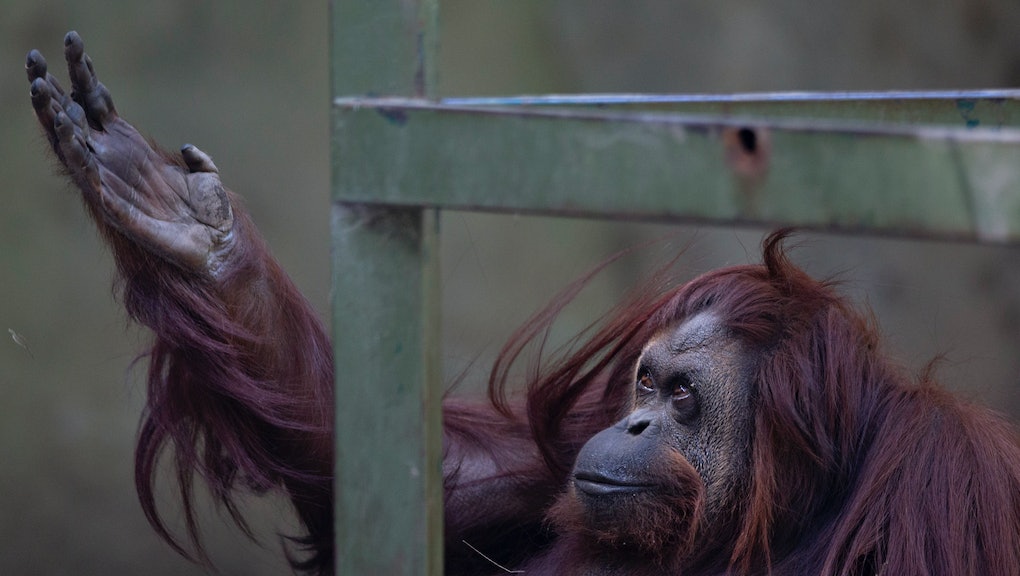 Sandra's not a human, but she is a person, according to an Argentine court.

Sandra is a 29-year-old Sumatran orangutan, born in Germany but housed at the Buenos Aires Zoo. The Association of Officials and Lawyers for Animal Rights (AFADA) filed a habeas corpus petition last month arguing that Sandra had been wrongly imprisoned, earning a court victory this week that could become the most important precedent for animal rights in legal history. The court ruled that Sandra, as a "non-human person," is owed some of the rights afforded to human beings, including the right to be freed from the zoo and transferred to a sanctuary.

This is the culmination of decades of work: Great apes are often the subject of animal rights campaigns, thanks to their high intellect and perceived emotional cognizance. Orangutans in particular display signs of advanced thinking, tool use and culture — the word "orangutan" actually means "forest man" in Malay and Indonesian languages.

Greater understanding of great ape intelligence has led to initiatives like the Great Ape Project, which tries to gain personhood rights for orangutans, chimpanzees, bonobos and gorillas who are currently suffering in low-quality captivity. The movement has gained support from people like biologist Jane Goodall and philosopher Richard Dawkins.

The victory in Argentina could pave the way for similar successes elsewhere. "This opens the way not only for other great apes, but also for other sentient beings which are unfairly and arbitrarily deprived of their liberty in zoos, circuses, water parks and scientific laboratories," said AFADA lawyer Paul Buompadre, as reported by La Nación.

A similar case in New York saw lawyers for the Nonhuman Rights Project argue that a chimpanzee named Tommy, who was being kept in a cage in warehouse, has similar personhood rights. That case was thrown out.

As Reuters explains, People for the Ethical Treatment of Animals filed suit against SeaWorld in 2011 likening the captivity of five orcas to slavery. It was also dismissed. While these kinds of cases can range from legitimately argued to publicity stunt, the outcome is often the same. Judges are often hesitant to make radical decisions — and it doesn't get much more radical than granting an animal personhood.

That's why this Argentine case is so important. It could be an outlier, or it could present a new avenue for activists to pursue rights for apes like orangutans on an international level.