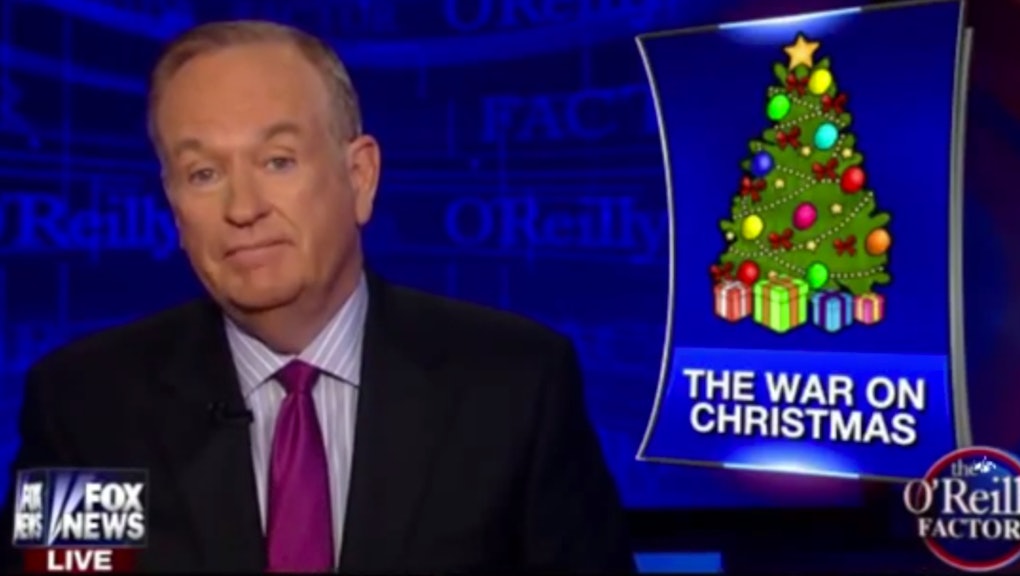 7 Times It's Appropriate to Say There's a "War on Christmas"

For yet another holiday season, the usual suspects are barking again about the so-called "War on Christmas."

It seems as though some conservative Christians, especially those of the pundit variety, just can't seem to accept that a vast array of secular and religious traditions are borne of the winter months. Instead of recognizing them, these types somehow believe that Christmas should always be front and center. And they feel threatened whenever that presence seems to slip, even a tiny bit.

But it's about time they got a long-overdue reality check. The country's prevailing holiday celebration, and the faith that it represents, is far from being under attack within our borders. Believe it or not, that doesn't mean that a "War on Christmas" doesn't actually exist. And to clear up any confusion, here are a few instances in 2014 when it will actually be appropriate to use that phrase:

1. The ongoing drug wars in Mexico

Thousands have been killed or kidnapped over the course of eight years, a result of conflicts between the drug cartels themselves and the government's attempts to clamp down on their influence. That includes the recent mass kidnapping of more than 40 students from the Ayotzinapa Normal School in Iguala, which was directly tied to police officers in the region. The current situation has sparked many major protests.

2. The insurgency in Iraq and Islamic State operations

Islamic State forces have wreaked havoc in the region, leaving thousands dead and beheading both local and foreign workers that they've taken hostage. The United States has conducted air strikes against the militants since August, and the U.N. Security Council has issued a resolution strongly denouncing Islamic State operations. The situation itself has claimed more than 16,000 civilian lives this year, according to the Iraq Body Count project.

3. The conflict in eastern Ukraine

Following Russia's annexation of Crimea in February, civil unrest and violence escalated between separatists and the Ukrainian government. Although a ceasefire was signed in September, per a report from Reuters, more than 1,300 civilians and combatants have been killed in skirmishes since.

4. The civil war in South Sudan

Peace within South Sudan's oil-rich borders remained fragile for a few years after the nation won independence in July 2011. Internal conflicts rose between rebels and a divided government during 2013, the result of a multimillion-dollar financial scandal. The ensuing battles have since killed more than 50,000 people, and a recent attempt at peace talks collapsed yet again. Now oil investor China just announced plans to deploy 700 combat troops to South Sudan as part of a U.N. peacekeeping mission.

5. The ongoing civil war in Somalia

There's been little to no stability in Somalia for decades. The latest chapter began nearly six years ago as the fragile government has battled a sizable force of rebels, which has since merged with al-Qaida. Meanwhile, Somali pirates have attacked and seized numerous ships moving near the country's coast, which hit a peak in 2011. Despite the establishment of a new Somali parliament in 2012, the first in nearly 20 years, some insurgents still remain today.

6. The conflict in the Central African Republic

Beginning in December 2012, rebel forces took on the government because of a breakdown in peace agreements amid widespread corruption. In a relatively short time, the Central African Republic's government was overthrown, prompting a wave of killing, pillaging and looting across the country. With revenge killings targeting Muslims, many have fled the predominately Christian country. And according to a recent report from Save the Children, thousands of child soldiers are involved in sectarian conflicts.

7. Another civil war in Libya

Divisions remain over how the country's government will take shape in Libya. This year, NATO-backed rebel forces that helped overthrow Moammar Gadhafi began fighting with each other, with one faction part of the newly established parliament in the country. According to the Libya Body Count project, upward of 2,700 have been killed this year.

So while the blowhards peacefully enjoy Christmas dinners and gift exchanges, their counterparts elsewhere in the world cope with widespread conflicts that ravage countries and claim lives. If we're being true to reality, it would be best for everyone to abandon the phrase "War on Christmas."

Unless, of course, anyone ends up talking about one of the many armed conflicts actually happening around the world during Christmastime.