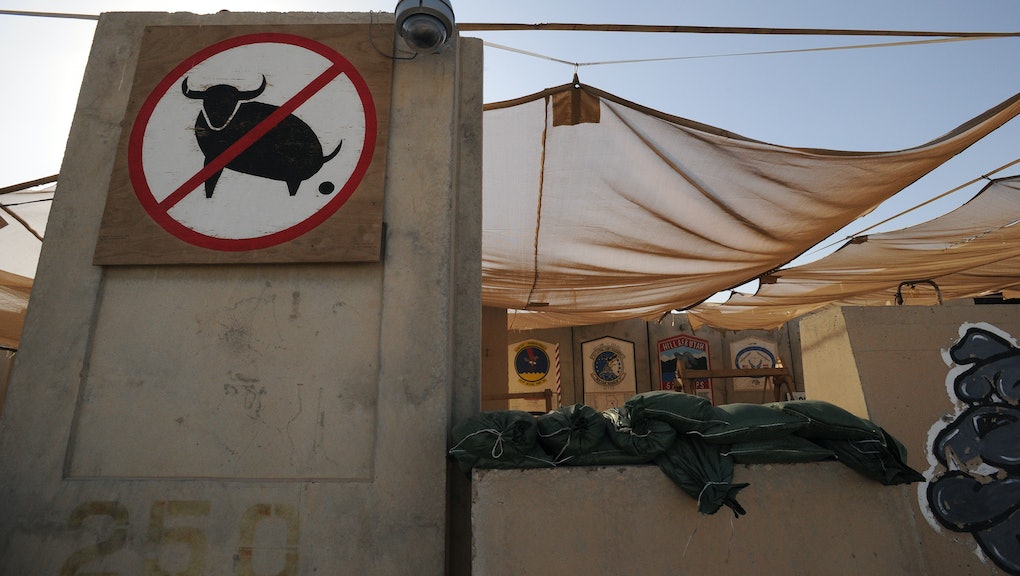 "This is fucking bullshit."

When 19-year-old teenager Colin Andersen uttered those words in front of a cop in Brighton, Michigan, this summer, police officers didn't take kindly to his anti-police sentiment. In fact, they disliked it so much that they wrote him a disorderly conduct ticket in the whopping amount of $200.

According to the Daily Press & Argus, Andersen claims to have made the statement "under his breath" after one of his friends was asked to stop skateboarding. No children were present, and Andersen wasn't accused of doing anything else. When he appealed the ticket in court, he lost.

Now he's ignited a local firestorm about freedom of speech. Libertarian congressional candidate James Week II, the ACLU and local activists have all taken his side. A "This is fucking bullshit" rally was held in May near where the words were spoken loudly and frequently.

"What got me to start arguing a little bit, they were asking all of us to leave because he got a ticket," Andersen told the paper, which ranked the incident among its Top 10 stories of 2014. "That's not fair. We're just standing around."

The truth is, "fucking bullshit" is protected speech — whether you like it or not. ACLU Michigan deputy director Rana Elmir told the Daily Press & Argus that "courts across the country have consistently ruled that cursing is speech protected by the First Amendment, regardless if people are within earshot."

American citizens even have the right to swear at the cops. After a man swore at a Boulder County deputy sheriff in 2011, the Denver Post reports he won a $20,000 settlement over the resulting ticket. "If it is a situation where somebody is unhappy and vocalizing they are unhappy, the courts have decided that police officers have to be able to take it," said Boulder County Sheriff Commander Rick Brough. This December, Georgia resident Amy Barnes won a $100,000 lawsuit after being arrested for telling Atlanta cops "fuck the police."

Generally, profanity is protected under the First Amendment unless the speech in question is deemed inordinately likely to incite criminal behavior. Cases like Cohen v. California (1970) have repeatedly affirmed the right to peacefully use free speech. Writing for the majority opinion, Justice John Harlan argued that "words are often chosen as much for their emotive as their cognitive force."

As Mother Jones reports, the ACLU has successfully defended "around a dozen" individuals against profanity-related charges, including one case involving the Pittsburgh police and 200 tickets that resulted in a $50,000 settlement in 2009. In 2011, a judge threw out North Carolina's ban on public profanity. A similar law in Middleboro, Massachusetts, was shot down in 2012.

Speech can be implicitly restricted, the same way that an adult bookstore can be limited in where it opens. (Wearing inappropriate clothing at a school assembly is such an exception.) But even conservatives like Fox News' Judge Andrew Napolitano agree that profanity is usually protected speech.

Why you should care: In short, the courts probably would not look favorably upon the officers who fined Andersen if he appealed the decision.

And they shouldn't. Banning profanity would put American municipalities in pretty bad company. Vladimir Putin's Russia recently banned swearing in arts or media, while prominent backers of similar measures in the United States include people like Bryan Fischer of the notoriously anti-gay hate group American Family Association. While urging the U.S. to adopt a similar law to Russia's in May, Fischer argued that the Founding Fathers "would be absolutely aghast" at the notion "that they were crafting a document that would allow the unlimited use of the F-bomb in polite society."

Swearing may be rude or unwise, especially when the police are involved. But the idea that the government should be able to enforce restrictions on peaceful speech to please "polite society"? That's fucking bullshit.