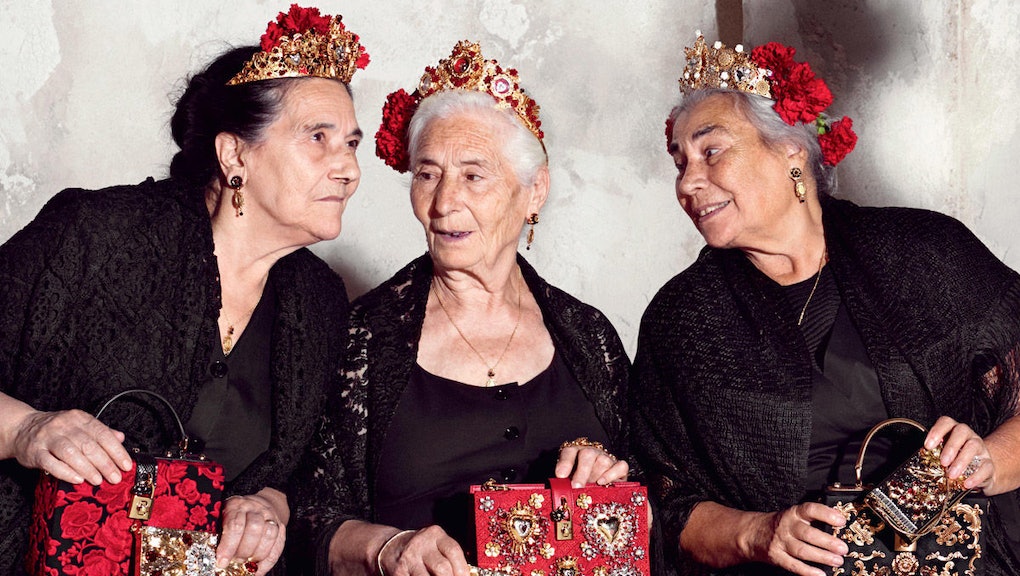 If there's one constant in the fashion industry, it's that models seem to get younger by the day. Kate Upton was just 19 when she landed that Sports Illustrated cover, and the industry's beloved Karlie Kloss got her start at 15.

But Dolce & Gabbana just gave us a positive, if not perfect, reminder that youth isn't a requirement for style.

The Italian brand cast several older women ("grandmas," as most fashion outlets are calling them, because that sounds more adorable) in its spring/summer 2015 ad campaign. And in an industry that consistently sidelines older women, that's a big deal.

In the ads, Dolce & Gabbana plays up the Spanish theme hard with eye-catching matador costumes and sexy black lace dresses. But that's all delightfully overshadowed by the nonnas in tiaras and floral crowns, even getting into the dance action in the video shoot.

Seeing gray hairs and imperfect, lined faces is practically revolutionary for a fashion ad shoot, even more so for a high-end brand like Dolce & Gabbana. These women get to showcase gorgeous accessories same as the rest of the models, and their youthful vitality shines though all the dark clothing. For an industry fixated on youth and ever-unrealistic beauty standards, Dolce & Gabbana's inclusion is refreshing.

It's also smart for the brand. "The older population is underrepresented in the fashion media and is currently underserved by the apparel industry," said Kansas State University's Joy Kozar, whose 2006 research found that older female shoppers responded more positively to older models and were more likely to purchase the clothing advertised. Women want to see themselves reflected in advertisements.

That said, while the Dolce & Gabbana photos are refreshing, they're far from perfect. The adorable grandmas are still off to the side as the younger men and women swirl around them; they don't get to be the ones with sex appeal. When it comes to appearances, no one would mistake them for the actual models like Bianca Balti and Blanca Padilla, whose bodies fit all of fashion's tight aesthetic requirements (tall, smooth, thin, etc.).

Fashion brands and magazines can go further — and they're starting to. Model Carmen Dell'Orefice, 83, posed for Harper's Bazaar Thailand this year, 68 years after her first Vogue shoot. The Row chose 65-year-old Linda Rodin, and American Apparel cast 62-year-old Jacky O'Shaughnessy for ad campaigns in 2014, the latter posing in lingerie.

There's no lingerie to be seen on these nonnas. But we hope more fashion brands realize that allowing gray hairs and wrinkles in ads won't ruin their cred — it can only help. We've got our fingers crossed for even more "grandmas" (and mothers, aunts and women of all ages) in fashion in 2015.