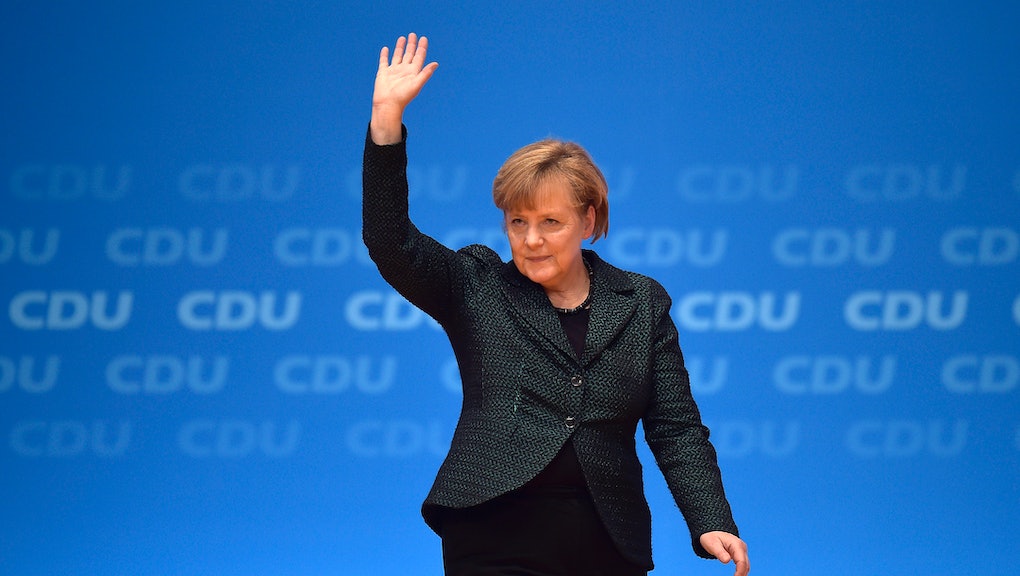 If You Want to See the Future of the US Economy, Just Watch What Happens in Germany

For German workers, everything changes on New Year's Day.

Chancellor Angela Merkel's coalition government is set to enact the country's first-ever minimum wage law. Laborers will be guaranteed no less than $10.37 an hour (8.50 in euros) as Germany joins the U.K., France and the Netherlands in an expanding group of Western European nations with wage floors higher than the U.S.'s $7.25 federal minimum.

The effects of the new law could provide U.S. policymakers with important information about what happens when a major global economy jump-starts its working class with higher hourly wages.

Why do we care about Germany? Despite some recent sagging, the Germans have one of the most robust economies in the world. The country is a manufacturing colossus that dominates eurozone fiscal debate. The German economy also has more in common the U.S., in simple math and international standing, than any other country in the world.

The cost of living is, both anecdotally and in more complex terms, roughly on par with the U.S. On a key indicator like rent prices — especially important to wage workers — Germany, especially in its big cities, is actually much more affordable. Tax rates on the highest-earning German are almost identical to their American counterparts. Corporate taxes are about 10 points higher in the U.S.

But small- and medium-size business owners are anxious and — much like opponents of the campaign to "raise the wage" in the U.S. — warning that they will have to cut down on staff to keep their profit margins up.

What could go wrong? "Job cuts, declining investment and higher costs are the price that companies and citizens will pay for what is supposedly a great social achievement," lobbyist Mario Ohoven told Reuters this week.

For American activists, this is a familiar argument.

"The proposed increase [to $10.10] far outstrips the productivity growth of minimum-wage workers and would force employers to curtail hiring," the conservative think tankers at the Heritage Foundation wrote in December 2013. They neglect to account for the nonpartisan Congressional Budget Offices's estimate that a similar spike would help bring 900,000 people out of poverty, increasing consumer spending power and lowering government benefit burdens. But anyway.

What could go right? To start, the minimum wage is a winning political issue. Chancellor Merkel, a Conservative Christian Democrat, forged her current governing coalition by promising Germany's more economically liberal Social Democratic Party that she would institute a wage floor.

In the U.S., a CBS News/New York Times poll from earlier this year found that more than half of Republican voters (52%), along with 86% of Democrats and 62% of Independents, supported raising the federal minimum wage. Ballot initiatives in four Republican-dominated states were passed by significant margins on Election Day.

The best case against the "higher wages means fewer jobs" argument comes from the University of California at Berkeley. Researchers there compared the jobless rates in neighboring counties with uneven minimum wage rates and found no real affect.

"We found in these cross-border comparisons that employment did not decline on the higher wage side of the border,'' said Michael Reich, director of Berkeley's Institute for Research on Labor and Employment and one of the report's co-authors.

At least one county with a higher minimum wage "saved on hiring and turnover costs, as well as the costs of not being able to fill all their vacancies," Reich reported.

Optimistic German economists are banking on the same results.

"The minimum wage increases costs for employers but can also have positive effects like filling vacancies and providing job stability," said Enzo Weber, from Germany's Institute for Employment Research. He also suggested that better wages could attract workers to previously undesirable jobs, which would cancel out any initial layoffs.

Looking into the crystal ball: As a rule, elected officials don't lose their jobs by going to bat for higher wages. At least not on Election Day itself. Defying heavily-funded business and conservative groups, who work day and night to defeat any candidate who might push legislation that threatens to take a sliver off corporate profit margins, can end a political career well before the voting booths open.

But the grassroots campaign to raise the minimum wage continues to gain steam. What proponents need now is more and more relatable evidence. Studies are useful, but nothing beats real world success stories. If Germany can enshrine a significant minimum wage — their first ever — and retain their place as a global economic powerhouse, then it will be that much more difficult to argue against the U.S. doing the same.