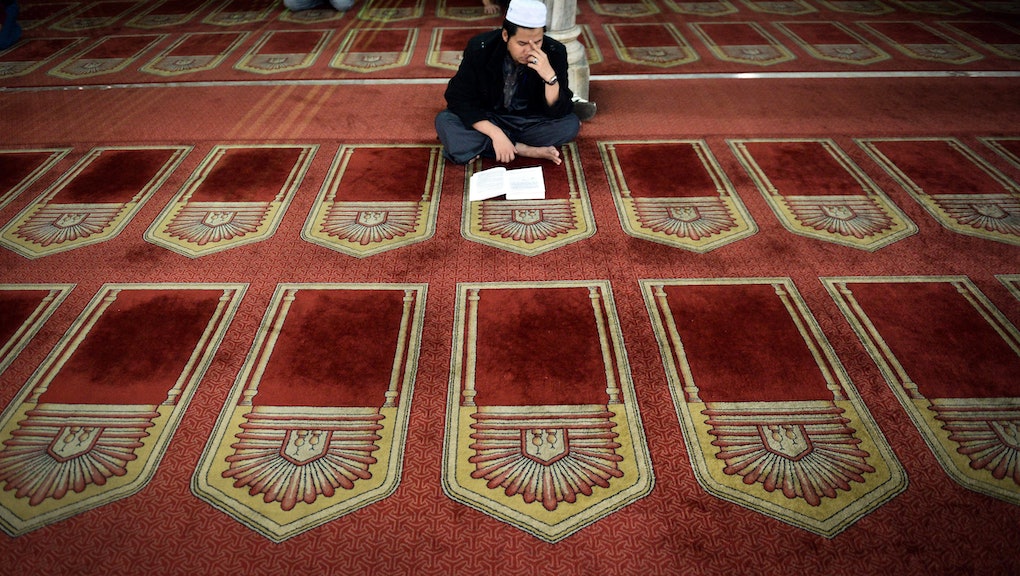 Why Does This Group of Outspoken Atheists Fear Muslims and Love War?

Despite the steady decline of religiosity in the U.S., the general public is still not fond of atheists and their ways. Polls show that atheists are one of the most mistrusted groups in America, so much so that the public considers adultery less of a sin than godlessness when sizing up a presidential candidate.

While there are a number of reasons for this discomfort, one is the legacy of the influential and controversial so-called "New Atheists," a band of belligerent public intellectuals including evolutionary biologist Richard Dawkins, the neuroscientist Sam Harris and the late but still influential journalist Christopher Hitchens. The trio has pushed so fervently for a venomous strain of atheism that their rise to fame has alienated many potential sympathizers and has come at the expense of the broader movement for secular life. Together they have cultivated an absolutist version of atheism that has produced many more enemies than friends.

While atheists tend to be particularly progressive and peaceful, the New Atheists harbor a deeply militarized attitude toward the religious. Their combative demeanors have afforded them an outsized amount of airtime and a disproportionate role in shaping the debate about atheism. The most recent incarnation of this was a dramatic, much-discussed showdown between Harris, actor Ben Affleck and New York Times columnist Nicholas Kristof on HBO's Real Time with Bill Maher, during which Harris and Maher — whose values overlap heavily with the New Atheists — waxed poetic about the existential threat that Islam poses to liberal society.

The troubling global politics of the firebrand New Atheists, which have centered on advocating for a broadly secular West to rid the world of Islam, is essential to understanding their failure as a movement. Harris's heated rhetoric on Real Time about how Islam represents the "mother lode of bad ideas" typifies the coarse and hysterical thinking that the New Atheists have encouraged about cultures and ideas they don't understand — and reveals their conviction that the quest for an enlightened global civilization is at war with Islam.

Islamophobia and endless war: The leading New Atheists did not make names for themselves in a philosophical vacuum. All three are deeply political animals who captured the public's attention when arguing against religion in the context of Islamism and war in a post-9/11 landscape. Few people deny that militant Islamist fundamentalism is a serious problem, but the New Atheists have responded to Islamist extremism by arguing that Islam itself — the faith of about one and a half billion people the world over — is a civilizational menace that must be stamped out to cure the world of its greatest source of savagery. As Luke Savage notes in an insightful article for Jacobin, for this mission they have "variously embraced, advocated, or favorably contemplated: aggressive war, state violence, the curtailing of civil liberties, torture and ... genocidal preemptive nuclear strikes against Arab nations."

Savage's essay pulls together many of the most extraordinary moments of their fear of Islam. Sam Harris once wrote in his book The End of Faith, "Islam, more than any other religion human beings have devised, has all the makings of a thoroughgoing cult of death." On another occasion, he wrote, "While the other major world religions have been fertile sources of intolerance, it is clear that the doctrine of Islam poses unique problems for the emergence of a global civilization." Dawkins (who admitted in 2013 to never reading the Quran) has deemed Islam "the greatest force for evil today," and said that for him "the horror of Hitler is matched by bafflement at the ovine stupidity of his followers. Increasingly feel the same about Islamism."

In a statement that typifies the colonialist mindset of all three of them, he once wrote, "All the world's Muslims have fewer Nobel Prizes than Trinity College, Cambridge. They did great things in the Middle Ages, though." Before his death, Hitchens popularized the term "Islamofascism" amid a crusade to convince the Western public that Islam was, at its core, a violent, totalitarian faith and the greatest threat the modern world has ever faced.

Harris and Hitchens have used this anxiety about the threat of Islam to buttress an ethos of war and imperialism (Dawkins has not engaged in this, although his rhetoric has not helped). Harris even contemplates the prospect of a preemptive nuclear strike: "What will we do if an Islamist regime, which grows dewy-eyed at the mere mention of paradise, ever acquires long-range nuclear weaponry? ... The only thing likely to ensure our survival may be a nuclear first strike of our own." In a section of The End of Faith entitled "What Can We Do?," Harris proposes a firm helping hand from the West:

"Some form of benign dictatorship will generally be necessary ... But benignity is the key and if it cannot emerge from within a state, it must be imposed from without. The means of such imposition are necessarily crude: they amount to economic isolation, military intervention (whether open or covert) or some combination of both."

For his part, Hitchens was one of the most vociferous and effective champions of George W. Bush's Iraq War. He expressed "pleasure" in killing jihadists and disappointment at low death tolls in Iraqi cities after the U.S. invasion. On Iran, he once said: "As for that benighted country, I wouldn't shed a tear if it was wiped off the face of this earth."

The New Atheists sound like security analysts: brimming with data points, and lacking any  acquaintance with lived experience in the  Muslim world.

Rebels with the wrong cause: The New Atheist pugilists have been driven by a rigid and ultimately misguided understanding of how religion functions in deeply religious societies. They believe that militant Islamist extremism and a literalist reading of the Quran represent a distillation of the "true" Islam, and so they seek its extinction.

On Real Time, Maher and Harris cited polling results showing how many Muslims in various countries support the death penalty for apostasy or the restriction of free speech, ideas that they understandably find troubling. But they sound like many security analysts: brimming with abstract data points, and lacking any discernible acquaintance with lived experience in the so-called Muslim world. A keener observer might realize that polls should be read beyond their literal results and represent a form of cultural signaling about local norms rather than immutable, doctrinal political convictions. Likewise, they might question the reliability of polls on Islam in the very countries they criticize for their limitations on free speech.

Religions are fluid, composed of worldviews that are always infused with local cultural, political, economic and historical realities. While the New Atheists love to argue that Islamist extremism is about Islam in its purest state, it's in fact about geopolitics; the language of religion is used to rally its followers, but so too is the language of anti-imperialism.

The one and a half billion Muslims of the world constitute an immeasurably diverse set of communities, with people who claim the same god nonetheless believing contradictory things about how society should be run. In today's world, no more than an extremely small minority of adherents of any faith advocate for the death of innocents or global theocracy. Among adherents who do so, it should be ascribed to those specific people rather than "true doctrine," since clearly most followers take no such things away from the same religious texts. To compulsively exaggerate the existence of religious extremism is unseemly for any serious thinker, and to encourage the use of force to deal with this exaggerated threat is an imperial impulse, not a civil one.

Steeped in paranoia about a world governed by Sharia law, the work of the New Atheists emanates from an intellectually totalitarian vision of an enlightened society. Their insecurity drives them to discard the hard questions of how to better society with secular values. Instead, they insist that the world must pledge allegiance to their idiosyncratic set of notions about meaning in the universe. Their fear leads them to argue for free thought by caricaturing, smearing and arguing for the extinction of thoughts that they feel uncomfortable with.

The less unhinged beliefs of the New Atheists about the value of a world without superstition and social conservatism and with more robust secular ethics are laudable. Organized religion in every region of the world has a record of justifying some terrible things. But they'd be better served by remembering that religion, like food or fashion or art, can be both bad and good, changes over time, is inextricable from human history, and is best understood through a pluralistic lens. You can ask people to try your cup of tea without smashing theirs.