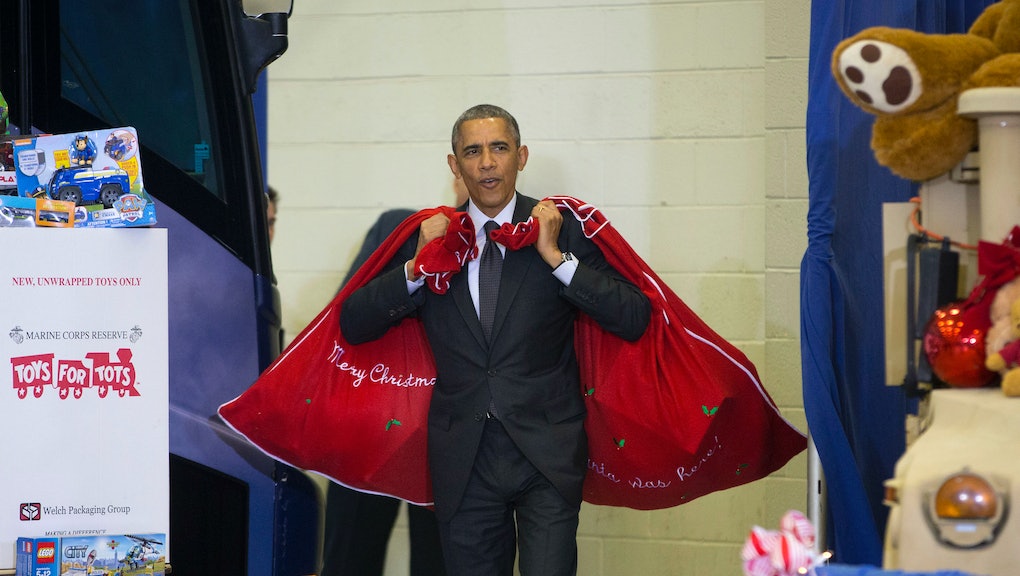 Christmas Eve is here and Santa Claus is off to the races, mushing his magical reindeer across the skies, plonking down presents under carefully lit trees and depositing, where need be, heavy lumps of coal in the stockings of the sinners.

So as you bide your time ahead of the inevitable (but lovely! Thank you, Santa!) gifted sweater, here's a last-second wish list for some of America's most deserving political figures. Because going on what we've seen the past eight days, they certainly did not get any of this stuff for Hanukkah.

You've got be naughty to be nice, former President George W. Bush's deputy tells us as he bounces around defending the vicious and deadly torture carried out by CIA agents during his time as White House second banana. But if you suggest his naughty dealing were, say, extralegal, he'll be quick to blame someone else.

"It wasn't torture," he said of the torture, "in terms of it wasn't part of the program — just some rogue agents acting on their own in ways that the administration can't be held accountable."

For Christmas... we ask Santa to deliver the old man a free, all expenses paid trip to that fairytale city in the Netherlands: The Hague, where a nice, warm and secure room awaits along with a war crimes trial in the New Year.

The president finished out 2014 on an unexpected high. His approval rating has soared back to 48%, or as Mitt Romney might break it down, all the moochers plus 1%. But in returning to this exalted space, Obama has stomped a fair many Republican toes. The GOP's riotous response to his immigration actions — which spared something like 5 million hard-working people from being deported — was both remarkable and totally predictable given the post-election warning issued by House Speaker John Boehner (R-Ohio).

For Christmas... we ask Santa to grease the wheels of government by gifting, for possible regifting, a bottle of the North Pole's finest merlot. Boehner is a known fan, and given Obama's new imperative to work with a Republican-controlled House of Representatives and Senate, a shared drink might be a good place to start.

Don't feel bad if you don't remember his time in office. Almost no one outside his family or circle of paid advisors has any clue what he did during two terms in office. Alas, Pataki has become a thing, not so much again as for the first time, simply by sending out a bunch of tweets. And in the time-honored American tradition, he's done it by appealing to the very worst in people.

And on the subject of that still-mysterious Sony hack attack?

"At the very least, we should declare cyberwar on North Korea," Pataki told New York radio station AM 970. "I don't know to what extent their society or economy is dependent on the ability to communicate electronically," he continued, expertly arguing against his own plan just a sentence after delivering it.

For Christmas... we ask Santa to deliver the governor a new venue to broadcast his dishonest, divisive and grotesquely ambitious palaver. Perhaps a Tumblr?

With the Republicans taking control of the Senate in the New Year, it's time for this Princeton Tiger to really earn his stripes. The run-up, though, has been a little bit messy. His plan to block Obama's immigration actions during a debate on the spending bill sputtered out and cleared the way for the White House to confirm more than 20 political appointees who would have been held up by Cruz's Republican colleagues in 2015.

Is it possible Cruz isn't quite as smart as he thinks? No, no, probably not. But he could definitely be better informed.

For Christmas... we ask Santa to drop off one of the recently-discovered secret "U.S. Senate Handbooks." The more you know.

All the latest polls agree: Hillary Clinton is primed to run roughshod over the Democratic field if she decides to run for its presidential nomination in 2016. Of course, anyone could have typed the same sentence — just swap "2008" for "2016" — eight years ago. At about this point in the nominating process back then, then-Sen. Barack Obama trailed then-Sen. Hillary Clinton by 11 points. So while Clinton leads the field by more than four times that number today, there are still roads to travel.

For Christmas... we ask Santa to bring Clinton a very honest ("Objects in mirror are much closer than they appear!") rear-view mirror. She'll need it for the tricky trail ahead.

The junior senator from Kentucky delighted Twitter again this year, "airing grievances" against this or that Washington character as part of the Festivus tradition. Paul mostly took aim at the usual suspects, tweeting out a laundry list of silly government expenditures. But he pulled his punches right when things were getting fun:

What? C'mon! Paul and Rubio have been clawing at each other's throats since Obama revealed his planned rapprochement with Cuba. Rubio, a Floridian with Cuban roots, immediately attacked the deal, calling it a "concession to tyranny." But Paul isn't so sure. Actually, he's totally sure — that Obama is doing the right thing. A day after Rubio did the rounds lambasting the White House, Paul told a West Virginia radio station he believed that "the 50-year embargo just hasn't worked" and that new, open trade was a better option. By Sunday, Rubio was making the rounds, citing the Cuba deal as part of "the Obama-Paul foreign policy."

For Christmas... we ask Santa to bring Paul some boxing gloves. Calling a timeout during the holidays was a lovely gesture, but in a few days it's going to be time to brawl.

Running for president is no small chore. And, as fellow governor Rick Perry learned a few years ago, the debate stage is the last place you want to be outed for being a little short on detail. That in mind, Christie has, per the Associated Press, spent "recent months" studying topics like "Ukraine and Russia, the Islamic State group and Iran" and then partaking in "detailed question-and-answer sessions."

For Christmas... we ask Santa to bring Chris Christie a two-year subscription (print and digital) to Foreign Policy, a very thorough and informative magazine about international news. The governor can decide if he wants a third year after the 2016 presidential election.

If you had asked a political pundit in July to name the five or six people most likely to be the running mate of the 2016 Democratic presidential candidate, a whole bunch of them would have named Gov. Jay Nixon, the austere, tough-on-crime governor from Missouri.

By Aug. 9, unarmed black teen Michael Brown was dead, shot and killed by a white police officer in suburban St. Louis. In the aftermath, Nixon went AWOL. When he did speak, he always seemed to make things worse. In the run-up to the grand jury's decision not to indict now-former Officer Darren Wilson, he seemed more concerned with protecting property than the lives of his constituents. Predictably, things went very, very badly.

For Christmas... we ask Santa to bring Jay Nixon a Wayback Machine, but for real life. Because if there is any politician who needs a re-do on the past six months, it's the governor of the state of Missouri.

What else is there to say?

For Christmas... we ask Santa to bring the vice president some window shades. That way he can enjoy a look at the outside world and not become a meme in the process.