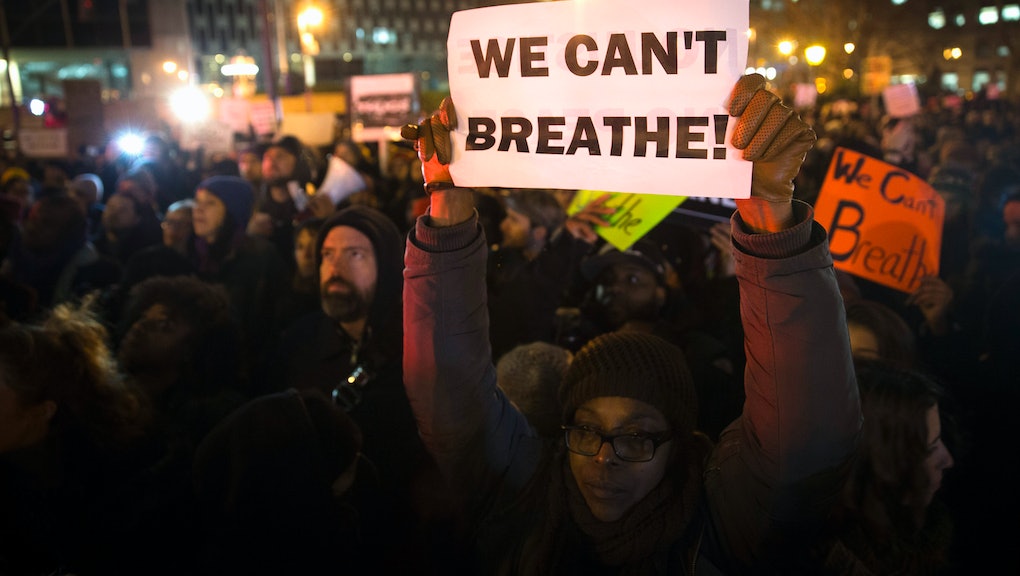 The recent deaths of unarmed black men at the hands of police in Ferguson, Missouri, and Staten Island, New York, managed to produce those rarest of media moments: Public scrutiny is focusing on trends and systems rather than isolated individuals and events.

Instead of fixating on the unknowable racial prejudice of the police officers involved in these incidents (was Officer Darren Wilson a secret or unwitting racist? What about the grand jury that declined to indict the officer who choked Eric Garner?), the debate has focused on the discriminatory nature of policing and criminal justice, and possible ways to reform them.

But a discussion of racial injustice in the criminal justice system only goes so far. The conversation sparked by the deaths of Brown and Garner must reckon with the pervasiveness of racial discrimination in a host of other American institutions that groom much of the black youth for a kind of second-class citizenship. Stark disparities in good housing, education and employment opportunities for white and black America are inextricable from the different encounters they have with the law enforcement and criminal justice system.

It's not only a matter of racism, but systemic, modern-day segregation. And Missouri is a perfect example of it.

An abandoned education system: A New York Times report paints a dark portrait of the school system that Brown made his way through during his brief life.

Just over a week before his death, Brown graduated from Normandy High School and had plans to attend a for-profit trade school that, according to internal documents, specialized in training the "Unemployed, Underpaid, Unsatisfied, Unskilled, Unprepared, Unsupported, Unmotivated, Unhappy, Underserved!" By the standards of his school district, Brown was a young man who had bright prospects.

The Normandy school district is the lowest-performing and among the poorest and most segregated in Missouri, according to the New York Times. Its operations were in such a poor state of affairs that it recently lost its state accreditation. Among black men who attended Brown's high school, half graduate and a quarter make it to a four-year college.

By contrast, the neighboring school district of Clayton — the same area where a grand jury declined to indict the officer who shot Brown — is overwhelmingly white, socioeconomically stable and high-performing in education. The district is regularly ranked in the top 10% in the state, and 84% of its students matriculate into four-year universities.

The New York Times investigation surveys the failure of St. Louis County, which contains both school districts, to desegregate its schools in the past half-century or so since the Supreme Court's 1954 Brown v. Board of Education ruling. While the county's education administrators agreed to integrate schools voluntarily, little changed until the 1980s, when a federal judge made a binding ruling that systematized transfers between racially homogenous school districts in the county. Black students' performances rose and the program was widely celebrated. But this peaked in 1999 when the program was made voluntary, transfers thinned and schools sunk back into patterns of segregation.

"Decades of public and private housing discrimination made St. Louis one of the most racially segregated metropolitan areas in the country," the New York Times report concludes. "A network of school district boundaries has, to this day, divided students in racially separate schools as effectively as any Jim Crow law."

Bigger than school: St. Louis County's tradition of segregated education is but one element of the segregated nature of life in the area. It's not just schools that tend to be predominantly white or black, and predictably possessing or lacking resources on that basis, but also neighborhoods, workplaces and public spaces.

The predominantly black community of Ferguson, which can be characterized much in the way an archetypal destitute inner city neighborhood might be — high rates of poverty and unemployment; derelict lots; bleak horizons for the youth or anyone attempting social mobility — embodies the limitations posed on people when segregation is so thoroughly entrenched in an area.

Ferguson is particularly noteworthy in this respect because it was once a white, middle-class suburb. Shallow explanations of how Ferguson came to be what it is today will attribute it to individual racial prejudice (white people just don't want to live in the same neighborhood as black people and flee the area upon their arrival), but just as policy plays a critical role in discrimination in education and criminal justice, so it does with housing.

As the Economic Policy Institute's report, the "Making of Ferguson," explains, government and real estate practices are essential to explaining how Ferguson became an economically depressed community in St. Louis over the course of the last few decades. A laundry list of the main policies to blame include:

— Federal and local requirements for, and enforcement of, property deeds and neighborhood agreements that prohibited resale of white-owned property to, or occupancy by African-Americans.

— Municipal boundary lines designed to separate black neighborhoods from white ones and to deny necessary services to the former.

— Urban renewal plans whose purpose was to shift black populations from central cities like St. Louis to inner-ring suburbs like Ferguson.

"But these explanations are too partial, and too conveniently excuse public policy from responsibility. A more powerful cause of metropolitan segregation in St. Louis and nationwide has been the explicit intents of federal, state, and local governments to create racially segregated metropolises. Many of these explicitly segregationist governmental actions ended in the late 20th century but continue to determine today's racial segregation patterns."

Where do we go from here? Ferguson is a quintessential example of the constellation of policies that have segregated communities across the country along the boundaries of race and class, and in the process established swathes of concentrated poverty that are virtually impossible to grow out of. These socioeconomically stagnant pools are the foundation for misguided policing theories that hold that entire segments of the population (i.e. poor people of color) are hopeless and thus best managed through constant surveillance and repression.

When contemplating the discriminatory elements of the criminal justice system, it's important to embed them within the broader context of pervasive segregation. Chances are that less innocent black men will be killed if they live in neighborhoods populated by people from a wide variety of backgrounds with an equal stake in the future.