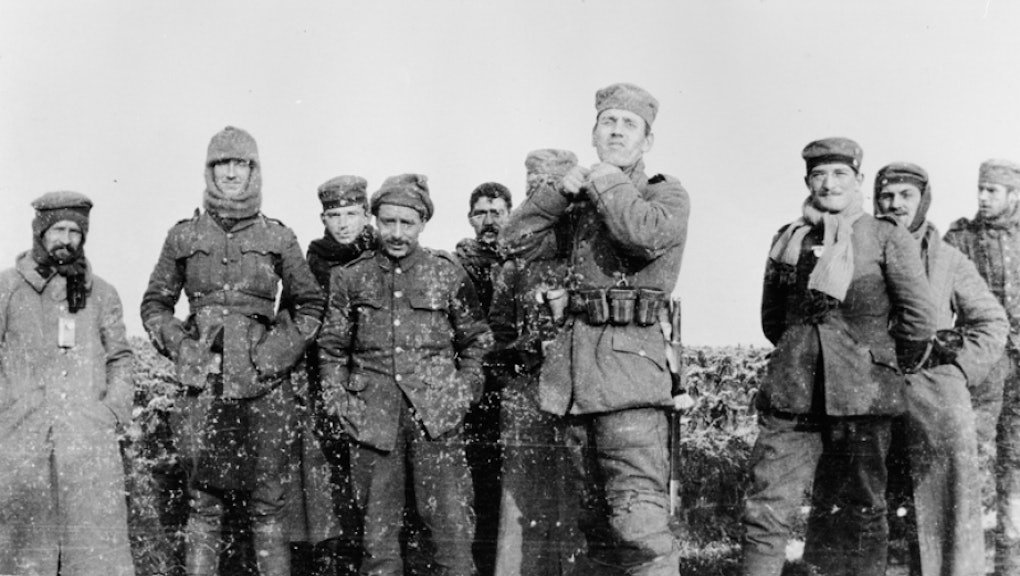 100 Years Ago, British and German Soldiers Showed the World the True Meaning of Christmas

It's one of the most surreal and most heartwarming stories to come out of World War I.

On Christmas Day 100 years ago, the bloody fighting on the Western Front screeched to a halt. An estimated 100,000 British, German and Belgian soldiers laid down their guns and celebrated Christmas in the muddy, bloodstained cold of No Man's Land, an unprecedented sliver of peace and humanity in the middle of an brutal, soul-crushing conflict.

"Late on Christmas Eve 1914, men of the British Expeditionary Force (BEF) heard Germans troops in the trenches opposite them singing carols and patriotic songs and saw lanterns and small fir trees along their trenches," writes historian Amanda Mason of the Imperial War Museum. "Messages began to be shouted between the trenches. The following day, British and German soldiers met in no man's land and exchanged gifts, took photographs and some played impromptu games of football. They also buried casualties and repaired trenches and dugouts."

The organic peace couldn't have come sooner. Previous battles in Europe had consisted of short battles in discreet locations, but World War I introduced the modern world to trench warfare, where side would battle for endless months over hundreds of miles of bloody morass without making a single gain. The spontaneous "Christmas truce" of 1914 was a welcome respite to the constant booming of bombs and artillery, poor sanitation and miserable conditions, making both German and British troops wading miserable by the closing weeks of the year.

"All I'd heard for two months in the trenches was the hissing, cracking and whining of bullets in flight, machine gun fire and distant German voices," Alfred Anderson, a British veteran and the last survivor of the "Christmas truce," recalled in 2004. "But there was a dead silence that morning, right across the land as far as you could see. We shouted 'Merry Christmas', even though nobody felt merry. The silence ended early in the afternoon and the killing started again. It was a short peace in a terrible war."

The Christmas truce has become something of legend for British and German historians, but it wasn't exactly a universal moment of human solidarity. The impromptu cease-fire was not observed everywhere along the Western Front: The fighting continued and casualties did occur on Christmas Day, and some officers expressed concern that the truce would undermine fighting spirit. According to researchers, the truce came to a close on Dec. 25 after German sniper fire killed two British soldiers on the front lines.

But for the soldiers who observed the short, surreal peace with their own eyes, it represented something remarkable: A triumph of common values over the bitter hostility of war, a testament to the power of humanity in a dark hour of history.

"First the Germans would sing one of their carols and then we would sing one of ours, until when we started up 'O Come, All Ye Faithful' the Germans immediately joined in singing the same hymn to the Latin words Adeste Fideles," recalled rifleman Graham Williams to the New York Times in 2005. "And I thought, well, this is really a most extraordinary thing ­— two nations both singing the same carol in the middle of a war."