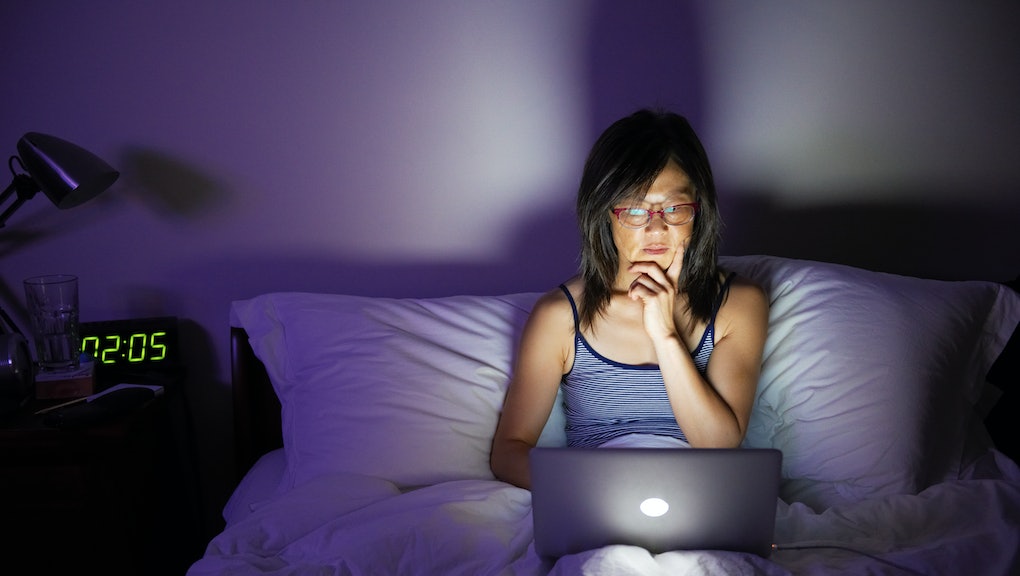 Is Too Much Choice Ruining Dating? Science Might Have the Answer

Michelle has been "online dating" for three years — except she's never actually gone on a date.

"I find it insanely overwhelming," the 24-year-old New Yorker told Mic. "At what point do you stop swiping?"

Michelle's case might be extreme, but the sentiment behind it is common. With so many choices in dating, particularly with the rise of online sites and apps, what should make dating easier than ever seems to make it impossibly stressful.

That feeling of too many choices can be diagnosed, almost perfectly, by psychology's famous "paradox of choice." There's a scientific reason that modern dating can feel so exasperating. We have so many choices that we can't feel satisfied about our choices — or choose at all.

The more choices we have, the more difficult choosing can be. While some daters thrive on more choice, it's clear that for many, more options yields more stress. And we do actually have more choice than ever, with millennials concentrating in urban areas at a higher rate than any other generation, and marrying at a significantly lower rate and at later ages than previous generations (hence more singles).

"I would love fewer options in an ideal world," said Abby, 25, and dating in New York City.* "It can certainly get confusing and monotonous at times" to monitor so many apps and possible partners.

As one tweet summed it up, "Sometimes I worry that the love of my life is on a different dating app."

That worry comes from a real place, scientifically. Increased choice not only leads to anxiety but to "choice overload," whereby "participants become cognitively overwhelmed as choice sets of potential partners grow larger." A 2008 study found that the more dating profiles participants browsed, the more prone they were to "memory confabulations," i.e., misremembering details of particular profiles.

An overwhelming number of options can also lead us to muddle our dating criteria. "Large choice sets cause participants to make mating decisions that are less closely aligned with their idealized mating decisions," observed a 2012 paper, "choos[ing] partners who diverge more from participants' own stated preferences."

Browsing more choices also ends up eating more time. A 2009 study on online dating concluded that "more search options triggered excessive searching," making it harder for participants screen out inferior options and hone in on what they really wanted. According to one measure, we now spend more time on Tinder than we do on Instagram or Facebook.

With so many possible choices, we risk not making a choice at all. Enter the "paradox of choice."

The theory was demonstrated by an experiment conducted by Columbia University professors in 2000 (later highlighted famously in psychologist Barry Schwartz's 2003 book The Paradox of Choice). The researchers presented grocery store shoppers with six jam samples on one table, and 24 jam samples on another. Twenty percent more customers were drawn to the table with 24 choices. But only 3% of those people actually purchased the jam; at the table with just six jams, 30% of shoppers did.

While "an extensive array of options can at first seem highly appealing to consumers," concluded the researchers, it might actually reduce their subsequent motivation to buy the product. Hence the "paradox" of choice.

By that logic, modern dating is a never-ending conveyor belt of jam jars, with a seemingly unlimited variety and a bottomless supply. This leads some daters to abstain from actively dating, like Michelle. For more of us, it casts over dating a level of indifference, one that ultimately yields less action.

By that logic, modern dating is a never-ending conveyor belt of jam jars, with a seemingly unlimited variety and a bottomless supply.

"With so many options, there is a lot of apathy," said Leah, 26. "You will match with so many people that you never even message with. ... You realize that the majority of people that you 'match' with probably barely looked at your profile, or haven't quite committed to dating, or are already dating tons of other people, and your 'match' becomes far less significant."

Daniel, 27, confirmed that that mentality influences his dating approach: "I often think that given fewer options, I'd be more likely to raise the ante and give something a real opportunity that I otherwise would not."

That tendency to resist choice when options are plentiful is fundamentally human, says science. A recent study on mate selection found that fewer choices for female mates actually makes men more likely to settle down. "We can think of the number of men and women in a population as a potential mating market where the principles of supply and demand hold sway," said lead author Ryan Schacht.

For modern singles, the supply has never been so big and the incentive to choose so small. Thus matches go un-messaged, messages go unanswered and so many online conversations never turn into offline dates.

Even when we choose, we're always looking out for better options. The second piece of Schwartz's "paradox of choice" argument is that an abundance of choices leave us unsatisfied with the choices we make. As he told Mic, "FOMO (fear of missing out) can lead either to failure to make matches or failure to commit to the matches you've made."

Or, as Mike, 27, put it, "In the back of everyone's mind while on a date is: I bet I can find someone hotter. Or I wonder who my match is on Coffee Meets Bagel. It's sad."

Keeping other options on the backburner, or simply operating with a "grass is greener on another dating app" mentality, contributes to the sense of apathy.

"Every date you go on, you are already aware that you have other options waiting in your queue," Leah said. "The pressure is off, which is nice, but so is the incentive to try. When I first started dating, I would dress up nicely, do my hair, freshen my makeup. Now I barely attend to what I wear on dates, and if the date goes poorly, I can can just check my dating apps on the subway home."

"In the back of everyone's mind while on a date is: I bet I can find someone hotter."

But choice can have its unexpected upsides. Compelling as the "paradox of choice" theory is, researchers have found there are situations in which it doesn't hold sway. In some situations (and depending on what kind of person you are), more options actually serve to heighten distinctions, and make us more certain of our ultimate choice.

That is, theoretically, the whole point of online dating. With more criteria to go by (see: OkCupid's thousands of questions), we can get hyper-specific about what we do and don't want. That's particularly beneficial for those looking to filter by concrete criteria, such as religious background.

"That's really the value of dating sites: finding the most relevant people, putting them directly in front of you, and giving you the opportunity to very quickly meet up and test the waters," said Steve Dean of Dateworking, an online dating consultancy.

But more importantly, the plethora of choices can help us stumble over something we didn't know we were looking for — and to realize which deal breakers aren't actually deal breakers after all.

"While the overwhelming choices might make it seem impossible to find the right match, it also opens up more ways in which you could like someone, ways that you might not have thought of before," Leah said. "With so many options, you might feel overwhelmed, but you also might realize qualities or traits that you didn't even know were important or attractive to you."

"So many options allows you the chance to happen upon something wonderful, unexpectedly, which is a pretty amazing feeling."

When the dating choices get to be overwhelming, it's that kind of optimism that counts.

* Some names have been changed.