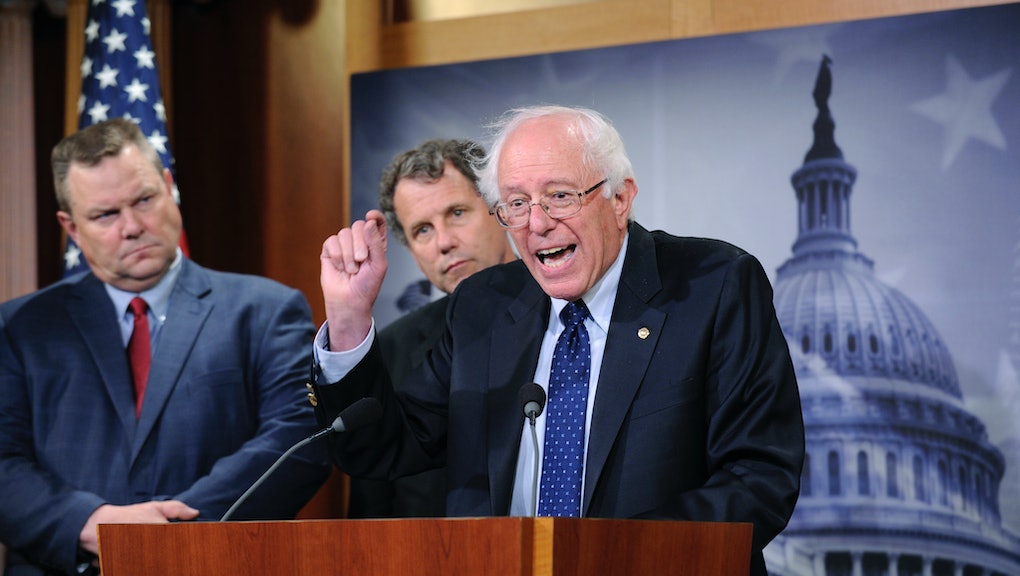 Progressive political darling Sen. Bernie Sanders (I-Vt.) has told the Associated Press he will decide by March if he is going to run for president in 2016.

Should Sanders enter the race, he could compete either as an independent or a Democrat. And that choice will say as much about his intentions as any policy plan or campaign speech.

The real decision: In joining the Democratic contest, Sanders would be installed immediately as the top challenger to overwhelming favorite Hillary Clinton. Despite his popularity with liberals, Sanders lacks a significant donor base, so being able to use the party's stage to bring his case to a national audience is hugely appealing. Clinton, in turn, would be forced to speak about the important issues that Sanders' champions, like America's growing economic inequality. On the downside, Clinton will be nearly impossible to beat.

"I don't want to do it unless I can do it well. I don't want to [run] unless we can win this thing," Sanders told the Associated Press, hinting that an independent run, like Ralph Nader's in 2000, might be where he's leaning. Going that route would mean smaller audiences and less attention from Clinton and other potential Democratic candidates. It would also mean that Democrats would attempt to marginalize Sanders and his message for fear that he could siphon off votes from the eventual nominee, much like they contend Nader did 15 years ago, effectively aiding George W. Bush's election.

One Clinton supporter quoted in Associated Press story was quick to remind to that Sanders is a self-declared socialist.

Why he matters: For now, Sanders is sticking to the issues that have already won him so much attention.

"You have one family, the Walton family of Walmart, owning more wealth than the bottom 40% of the American people," he told the Associated Press, test-driving a potential stump speech. "We have 95% of all new income going to the top 1%. You have millions of families unable to afford to send their kids to college. People are desperately worried about whether or not they are going to retire with dignity."

His liberal credentials are unrivaled by any potential candidates, provided Sen. Elizabeth Warren (D-Mass.) doesn't do an unlikely about-face and enter the race. Sanders voted against the federal government's newest $1.1 trillion spending bill, promising he would soon introduce legislation to "break these too-big-to-fail banks up so that they can never again destroy the jobs, homes and life savings of the American people."

He has also set forth a "12-step plan" featuring a trillion-dollar program rebuild U.S. infrastructure, pledging to create "13 million jobs" in the process, while also strengthening unions, providing free access to higher education and moving the country to a single-payer health care model by raising taxes on the richest Americans.

The next step: Sanders is unlikely to win any contest, for the Democratic nomination or otherwise. He knows this. But that doesn't mean it isn't worth getting into ring. He knows that too. Come March, Sanders should take the pragmatic approach and bring his electrifying message to the Democratic primary race. At the very least, he will put Clinton and the Democrats on notice: Talk about the issues or pay the price at the polls.