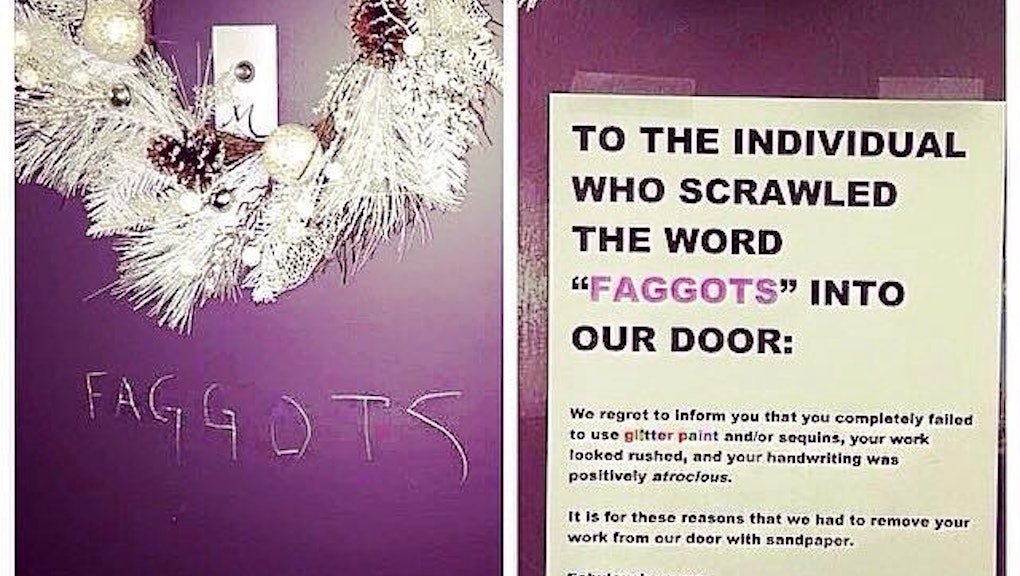 This Gay Couple's Response to Homophobic Graffiti Is Absolutely Fabulous

This Christmas, one homophobe felt the snarky wreath — er, wrath — of two gay men who suffered a hate crime in their own home.

The unknown asshole, clearly confused and frightened by the complexity of the world, felt the overwhelming desire to carve the word "FAGGOTS" into the door of an apartment inhabited by a gay couple.

It's an incident of blind, moronic hatred that serves no purpose other than to make its targets feel small and subhuman. But, for the couple in question, it was an opportunity to respond with the takedown of the season:

It's an artistic critique for the ages. "We regret to inform you that you completely failed to use glitter paint and/or sequins, your work looked rushed and your handwriting was positively atrocious," the residents posted, with the words "glitter paint" rendered in rainbow colors in a useful example of what the slur-scratching douchebag might try next time. "It is for these reasons that we had to remove your work from our door with sandpaper," the note concluded.

According to the person who posted the comeback on Imgur, a friend of one of "The Gays in Apt. 611" (which would make a fantastic reality show, by the way), the apartment complex later painted over the offending scratches — although nothing will be able to soothe the severe burn to the gay-basher in question.

"Fabulously yours." The best way to combat the insecurity that drives someone to scrawl hate speech into a stranger's door is to drown it out with your own confidence. By reclaiming commonly held stereotypes of gay men — top-shelf sartorial sensibility and artistic flair — as tools to take a homophobe down a peg, the couple showed to everyone walking in front of their door that they're proud of who they are.