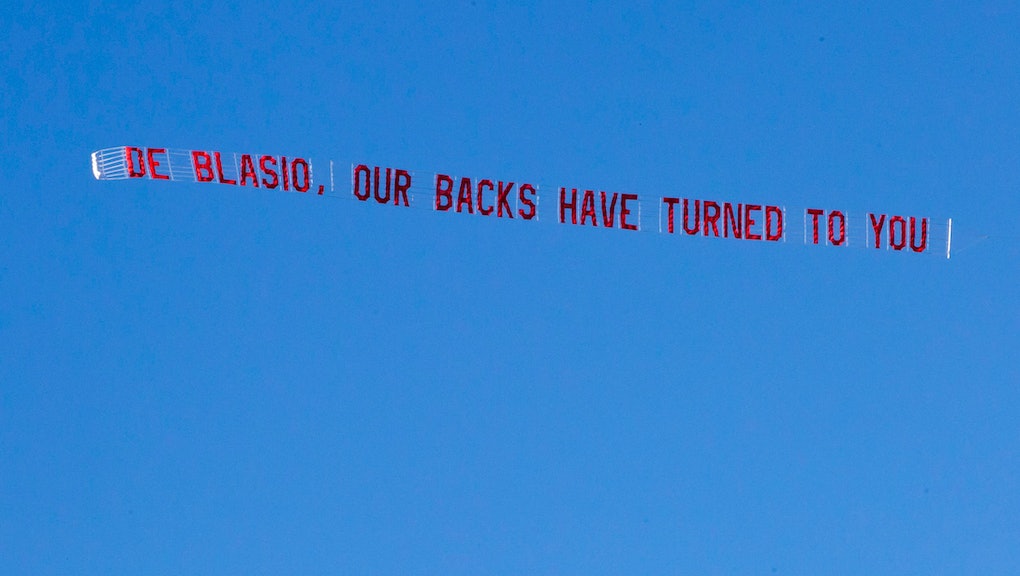 New Yorkers who live near the Hudson River awoke Friday morning to an airborne reminder of the tension between police and New York City Mayor Bill de Blasio that came to a head with the "execution" of two police officers last weekend.

A plane flying a banner reading "De Blasio, Our Backs Have Turned To You" was spotted over the Hudson River, the message an apparent reference to the cops who literally turned their backs on de Blasio during a press conference after Baltimore man Ismaaiyl Brinsley killed officers Rafael Ramos and Wenjian Liu on Saturday.

Ashley Chalmers, owner of Jersey Shore Aerial Advertising, the company that flew the banner, declined to say who hired him for the flight. But John Cardillo, a blogger and former NYPD officer, tweeted that he was contacted by a "coalition of NYPD cops, detectives and supervisors."

Cardillo released what he claims is a statement from those police officers on his blog:

As a large and unified group of current and retired NYC Police Officers, Detectives, & Supervisors, we are outraged by the mayor's incendiary rhetoric, and for facilitating the current hostile climate towards the NYPD. We understand that the department and even our own unions can only go so far in their public condemnation of the mayor as to not irreparably damage the working relationship with the city, or future contract negotiations.