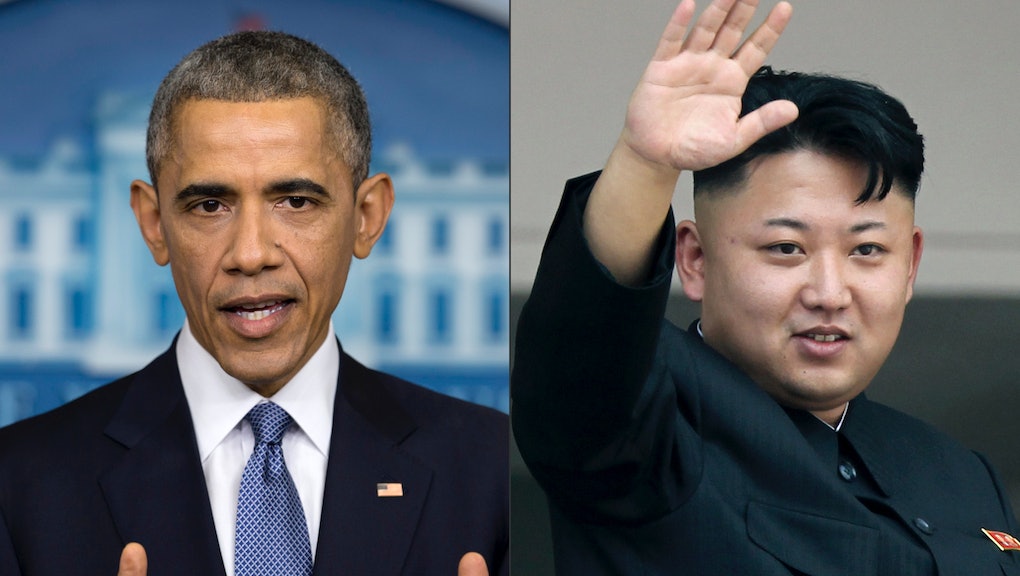 The North Korean government, still reeling from an Internet outage that crippled the country's Web access over much of the week, has declared that the United States is at fault — and randomly employed racist insults against President Barack Obama in the process.

"Obama always goes reckless in words and deeds like a monkey in a tropical forest," a spokesman for North Korea's National Defense Commission, the dictatorship's top governing body, said in a statement. "The United States," he continued, "with its large physical size, and oblivious to the shame of playing hide and seek as children with runny noses would [be], has begun disrupting the Internet operations of the main media outlets of our republic."

The statement also underscored previous remarks holding President Obama personally responsible for the release of The Interview, a film that North Korea has described as illegal, dishonest and reactionary, Reuters reports. In North Korea, where every facet of media and communication is controlled by the government, the idea that a movie studio could release a film without direction from the government is anathema.

It's not the first time North Korea has dropped racist insults: While President Obama was touring East Asia in May, an editorial in the government-controlled Korean Central News Agency declared that President Obama "still has the figure of a monkey while the human race has evolved through millions of years," and called him "a crossbreed with unclear blood." The White House, which usually ignores the rhetorical flourishes of the hermit kingdom's state-run media, called the comments — which included a description of South Korean President Park Geun-hye as an "old prostitute" — "particularly ugly and disrespectful."

North Korea, usually dismissed by Westerners as little more than a run-of-the-mill Communist dictatorship under the thumb of a tyrannical family of pompadours, has a strong current of racist ideology, with the concept of racial and moral purity inextricably intertwined. As detailed in B.R. Myers' The Cleanest Race, North Korea's cultural and political identity isn't based on its dubious status as "the last bastion of Stalinism," but in a racist ideology of virtue and innocence, with the Korean race standing alone as the world's "purest" race. As Myers puts it, "The Korean people are too pure-blooded, and therefore too virtuous, to survive in this evil world without a great parental leader."

The philosophy has dark consequences. North Korean women who become pregnant outside of the nation are often subjected to forced abortion or infanticide in order to maintain racial "purity."

Expect more statements like this: As North Korea's government continues to face blowback for hacking Sony (whether it actually did it or not) and is increasingly isolated on the global stage, one of the only weapons in its arsenal is the inflammatory press release.

Or, perhaps we should be more worried about nuclear weapons.