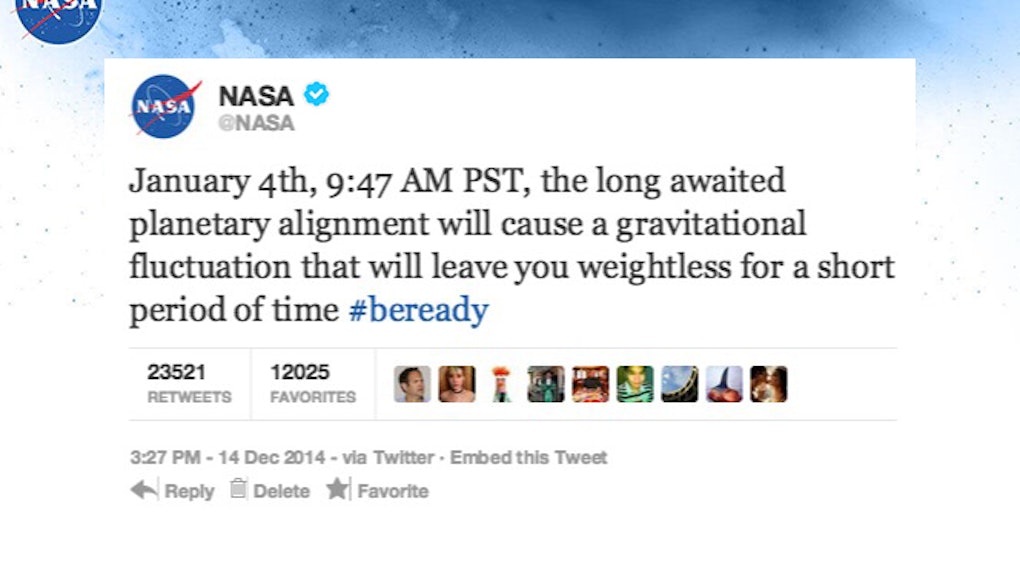 Your Facebook Feed is Lying: We're Not Going to Become Weightless in January

According to a news story shared by a guy you haven't spoken to since middle school, and apparently half of Facebook, NASA has announced something major: On Jan. 4, you'll be able to float in the air for five minutes as a result of a planetary alignment that will "decrease gravity."

Unfortunately for those of us still working off the eggnog weight, the "news story" is complete bullshit.

Your Facebook feed has become the latest victim of Daily Buzz Live, a site that describes itself as "a news Web publication with news articles," some of which happen to be "works of complete fiction." The story has gone viral, likely boosted by the fake embedded tweet from NASA. But in a statement to AL.com, the space agency denies both the tweet and the claim that the alignment of Jupiter and Pluto will somehow let you float:

"These rumors are false, and the image of a NASA tweet circulating is a doctored image. Microgravity exists only off Earth. The crews aboard the International Space Station live and work in microgravity, where they conduct science experiments that take advantage of this unique environment aboard the orbiting laboratory. Temporary microgravity can be created using aircraft flying in parabolic arcs."

Astronomer Phil Plait notes in an article for Slate that he had to debunk this same hoax just a year ago. "First of all, the gravitational forces of the other planets in the solar system have essentially zero effect on you personally," he says. "And we're done. Full stop." Even if you added the gravitational force of all of the planets in the solar system, Plait says, they pull on you with a force less than 2% of that of the moon.

It's a hoax as hold as time: According to rumor-debunker Snopes, the urban legend dates back to 1976, when a British astronomer convinced a radio audience to jump up and down to experience the same "gravitational fluctuation." Some listeners were convinced that it was true. "Different day, same joke," Snopes notes. "Some denizens of Earth may indeed enjoy jumping up and down at precisely 9:47 a.m. local time on Jan. 4, 2015, but if they do, they won't be hanging above the surface of the Earth for any longer than they would on any other day or time."