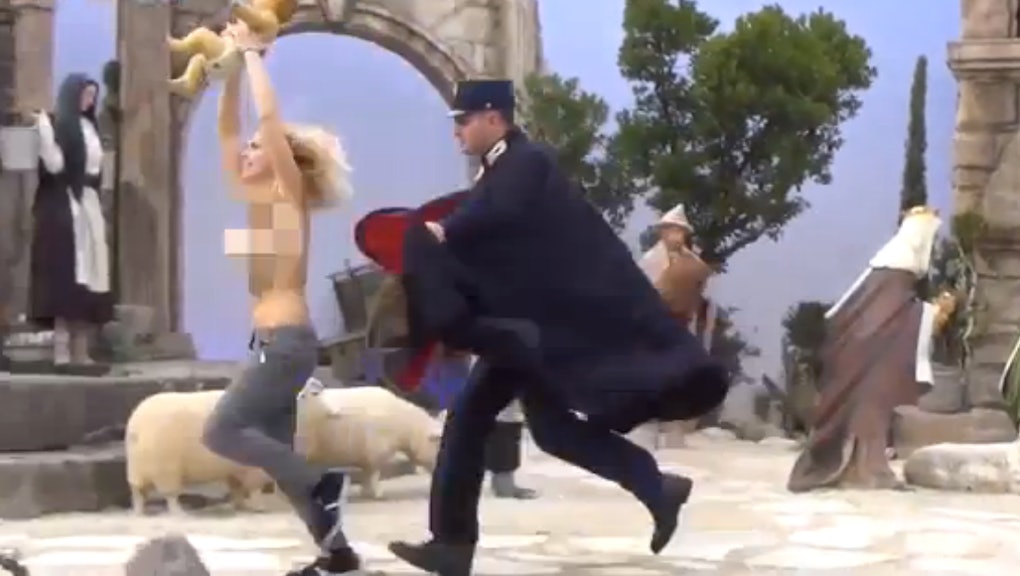 The Vatican Arrested a Feminist Activist for Kidnapping Baby Jesus

The Vatican has placed a member of radical Ukrainian feminist group Femen under arrest for baring her breasts and kidnapping a statue of the baby Jesus from a nativity scene in front of a crowd of thousands in St. Peter's Square.

Vatican spokesman Father Federico Lombardi said the woman, Ukrainian citizen Iana Aleksandrovna Azhdanova, stands accused of vilification of religion, obscene acts in public and theft. A Vatican policeman stopped Azhdanova, who had "God Is Woman" written on her bare chest, after she seized the statue of the Christ child and attempted to make off with it shortly after Pope Francis had finished reading his Christmas greeting to the faithful assembled. The policeman attempted to cover Azhdanova with his cape with mixed success. (More importantly, please take a moment to appreciate the fact that Vatican police wear capes!)

Femen, for its part, is unrepentant, even putting up a gallery of images of the attempted Jesus-napping on its website. In a statement, the feminist collective proudly described itself as "persona non grata" in Vatican City. This is how it reads in full:

This morning the Holy Vatican court reviewed the case of the kidnapping of baby Jesus Christ commited by FEMEN sextremist and recognizing the absolute legality of her arrest, however, it has ordered to release Zhdanova. Sextremist Zhdanova will be extradited from Vatican, followed by a ban on enter the territory of the Holy See. The infant, which have been kidnapped by FEMEN, became a symbol of necessity of taking away a woman's right on reproductive function and sexual freedom off the Church. A sacred duty of every woman is to take away the child from Vatican!

The organization describes itself as "fighting patriarchy in its three manifestations: sexual exploitation of women, dictatorship and religion," and has stated that its goal is "sextremism serving to protect women's rights."