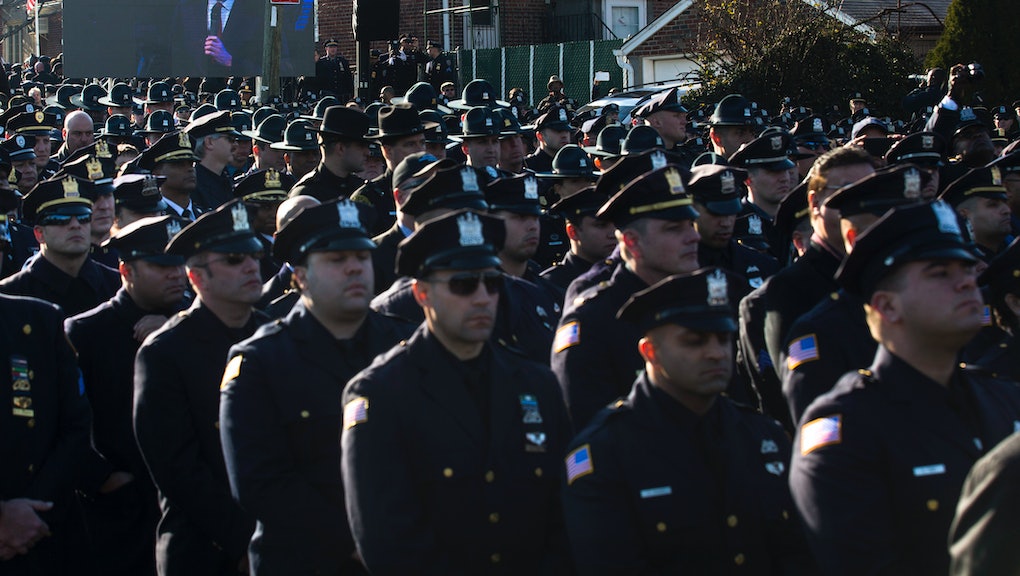 At today's funeral service for New York police Officer Rafael Ramos, who was gunned down alongside his partner, Officer Wenjian Liu, as the partners sat in their patrol car in Brooklyn on Dec. 20, hundreds of NYPD officers showed Mayor Bill de Blasio what they think of City Hall — by turning their backs on him.

The demonstration, which occurred during the mayor's remarks at the funeral, took place a few blocks from the Christ Tabernacle Church in Queens. When the mayor began speaking, hundreds of officers turned their faces from the large screens relaying images from inside the church. When asked by a New York Times reporter whether the move was to demonstrate anger with de Blasio, a police officer nodded silently.

Tensions are high: Clearly, feelings of anger and betrayal on the part of the city's police officers have not abated in the week since the shooting last Saturday. Inside the church, however, de Blasio was met with polite applause before and after his speech; he became emotional as he described the NYPD as "the finest police force in the country."

Some outside the church made their anger with the mayor even more obvious:

The perceived lack of support from de Blasio largely stems from a speech he gave following a Staten Island grand jury's refusal to indict an NYPD officer following the chokehold death of Eric Garner. At the time, he described instructing his mixed-race son Dante to "take special care" during any encounters with the police. Some within the Patrolmen's Benevolent Association, the city's largest police union, suggested that de Blasio was conveying that police officers were to be feared.

Additionally, in speaking about protesters who were arrested and charged with assaulting police during a demonstration in New York, de Blasio used the word "allegedly," which some in the NYPD took as a slight. "There is blood on many hands, from those [who] incited violence under the guise of protest to try to tear down what police officers do every day," said Patrick Lynch, president of the PBA. "That blood on the hands starts at the steps of City Hall, in the Office of the Mayor."

The history of bad blood goes back decades: The PBA has attacked almost every New York mayor in modern history, even those who were considered by the city at large to be tough on crime and friendly with the police. For example, Ed Koch, generally remembered as a particularly pro-police mayor, was met with a "work slowdown" in 1985 after a white police officer was indicted for manslaughter after shooting an elderly black woman. The PBA pressured Koch into restoring the officer to the force, despite being under indictment.

Even former Mayor Rudy "Broken Windows Isn't Racist or Implicitly Biased" Giuliani, who ran on a crime-fighting platform, was denounced after he refused exceedingly generous contracts for police officers in 1997. Fliers distributed around NYC at the time demanded that he be excluded from police funerals because his attendance "would only bring disgrace." That same language is now being used by PBA members against de Blasio, who is also threatened with exclusion from officer funerals.

De Blasio does have one defender: Police Commissioner William Bratton backed his boss since the night of the shooting, when he memorably stated: "You put that blue uniform on and you become part of that thin blue line between us and anarchy."