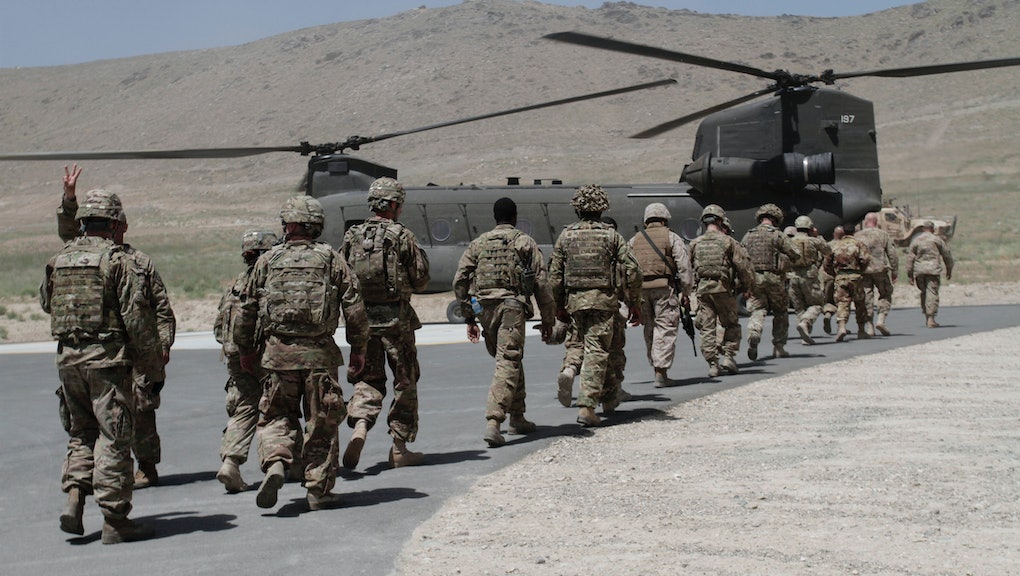 The U.S. Has Officially Ended the War in Afghanistan

The news: After 13 years of conflict, the United States and NATO have officially ended their war in Afghanistan on Sunday by way of a symbolic ceremony at their joint military headquarters in Kabul. The Associated Press reports that Gen. John Campbell, commander of the U.S.-led International Security Assistance Force, rolled up the white and green ISAF flag and put in its place the new flag for the upcoming mission called Resolute Support.

The new mission will focus on a supporting role led by 13,500 troops — roughly 11,000 of which will be American — to begin Jan. 1, 2015, and "serve as the bedrock of an enduring partnership" between NATO and Afghanistan, Campbell told a room of reporters and diplomats. Resolute Support will be tasked with training and supporting Afghanistan's military as the country pushes to make the final transition out of the war that's occupied the country for the past 13 years.

How we got here: The United Nations Security Council created the NATO-led ISAF in December 2001 as the U.S. prepared to go to war in Afghanistan, largely in response to 9/11. Since then, roughly 50 countries have contributed troops to the coalition effort — though around 40% of the troops came from the U.S. — that was initially tasked with securing Kabul and the nearby areas from the Taliban and al-Qaida. Over the past 13 years, however, that mission has evolved and changed as various parts of the country saw fluctuating waves of conflict.

According to the Associated Press, 2,224 American soldiers were killed as a part of this conflict. At the war's peak in 2010, President Barack Obama ordered 140,000 troops to try to push insurgents out of strategic areas in the country's southern provinces of Helmand and Kandahar, notable Taliban-controlled areas in the late-'90s.

What's next? While the current conflict has officially ended, the U.S., along with other nation-members of the coalition, will keep troops stationed in Afghanistan — though that's not uncommon considering how many U.S. troops are stationed in both conflict and non-conflict zones around the world. But as the country looks to take full control of its conflict as the bulk of U.S. troops withdraw from Afghanistan, the Associated Press reports that some Afghans have "mixed feelings" about what's to come next.

"At least in the past 13 years we have seen improvements in our way of life — freedom of speech, democracy, the people generally better off financially," 42-year-old shop keeper Gul Mohammad told the Associated Press. "But we do need the foreign troops to stay here at least until our own forces are strong enough, while our economy strengthens, while our leaders try to form a government."

Some concerns have also been raised about the recent spike in Taliban violence, which some say has come as a result of Afghan President Ashraf Ghani's signing of the bilateral security agreements with Washington and NATO that resulted in Resolute Support. In fact, this year is on track to be the deadliest in the conflict's history, with the United Nations estimating that civilian casualties will be at 10,000 for the first time since records started being kept in 2008. The U.N. believes that many of those death were caused by Taliban attacks.