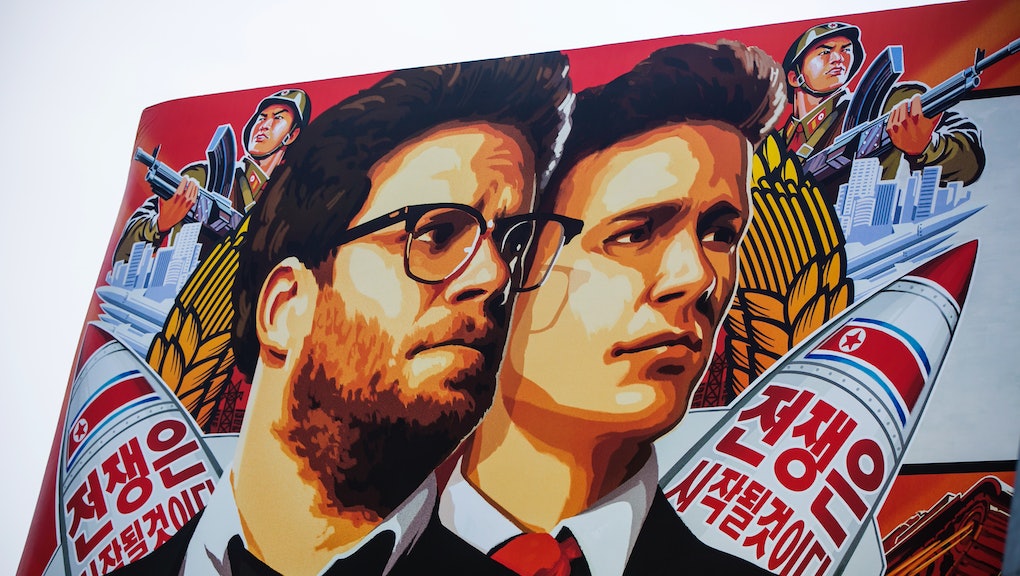 That's right, apparently droves of North Koreans are demanding access to The Interview, the recent Seth Rogen/James Franco comedy centered around killing North Korean leader Kim Jong Un. Free North Korea Radio, a North Korean defectors-run online radio network, reports that demand for the film has been skyrocketing, with some eager North Koreans willing to pay around $50 a copy, roughly 10 times the price of a normal black market DVD in the closed-off country.

Though most North Koreans would currently have limited means to procure a copy of the film — aside from defectors like Park Sang Hak who've publicly stated his intention to smuggle copies inside the country's closely guarded borders via 33-foot hydrogen balloons — the North Korean government is reportedly doubling down on its efforts to make sure no one sees what they're viewing as anti-North Korea propaganda.

Business Insider reports that North Korea's State Security Department and the Ministry of People's Security have recently held emergency meetings to make sure The Interview doesn't cross the border. Plans include increasing border inspection levels and even directly addressing black market dealers and asking that no U.S. movies are brought in for the foreseeable future.

Whether or not you've seen the movie, it's no surprise that North Korea doesn't want its people seeing the film. For the most part, The Interview is a crude and sometimes hilarious slapstick comedy about two Americans trying to kill Kim (SPOILER ALERT: They do it).

But aside from that, much of the film focuses on the various myths and questionable legends surrounding North Korea's government and its infallible leader. While the country's propaganda machine is surely powerful, it might not be enough to explain away the various terrible truths about famine and poor living conditions the film touches upon. As Rick Klein, a managing director for film and media at McLarty Associates, a strategic advisory firm in Washington, D.C., wrote in the Washington Post:

Think of the movie as Chernobyl for the digital age. Just as the nuclear catastrophe in the Soviet Union and the dangerously clumsy efforts to hide it exposed the Kremlin's leadership as inept and morally bankrupt, overseeing a superpower rusting from the inside, so does The Interview risk eroding the myths, fabrications and bluster that keep the Kim dynasty in power.

With that much power behind this film, don't be surprised if eager North Koreans go to great lengths to watch The Interview. And if that happens, there's no telling how they'll respond to the comedy about killing their leader and "freeing the country."